A whole lot of DUNKIRK talk.

I’ve recently been losing a lot of time down the rabbit hole that is TV tropes, which outlines common storytelling devices, arcs and techniques employed in film and TV. It doesn’t just dissect the plot of films but the cast and credits as well, and one of their pages, ‘And Starring’, offered some food for thought.


The article states that the best places for an actor to get their name on a single title card (that’s when an actor’s name fills the screen, and no-one else’s), is at the beginning (demonstrating you’re the main player) or at the end (the ‘and’ draws attention to the actor’s celebrity or clout).

One film that certainly puts true to this theory is Now You See Me 2, which opens its single title credits with Jesse Eisenberg and ends with Morgan Freeman, not too shabby by anyone’s standards.

Sometimes, if there are too many big names to highlight just one, the film closes with ‘with… and…’, as was done in Moonlight, ‘with Naomie Harris and Mahershala Ali’.

Knowing this, it didn’t surprise me to see Dunkirk employed this same wording. Dunkirk has a big ensemble case, featuring primarily young British/Irish/European actors, for whom this film is their breakout role. Some have benefited from the commercial and critical success of the film, in conjunction with appearances in other 2017 releases, to cement their profile as a rising star (eg Barry Keoghan, who was thoroughly chilling in The Killing of a Sacred Deer).

But there are four well-known actors in Dunkirk, men who you wouldn’t need to IMDb after the film: Kenneth Branagh, Tom Hardy, Cillian Murphy and Mark Rylance.

The film poster for Dunkirk wanted to accredit the young men who played soldiers and whatnot, whilst highlighting that they had some established actors on their books too (whilst also reminding teenage girls to come watch because whilst Inception and Interstellar were l-o-n-g, this film has him from One Direction!). And so, with the MO of with ... and...: 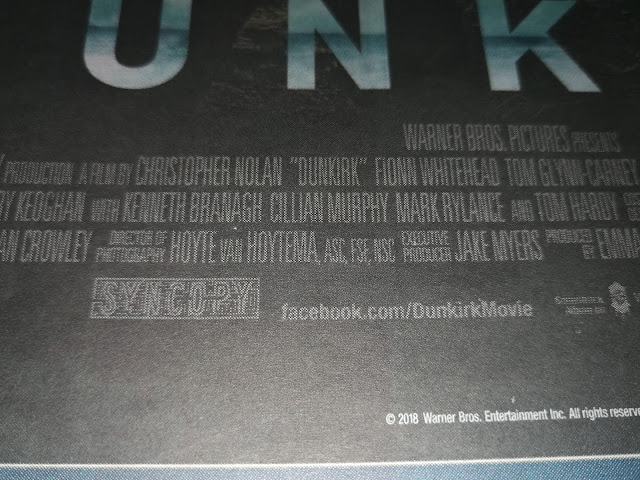 This mouthful of ‘with Kenneth Branagh Cillian Murphy Mark Rylance and Tom Hardy’ might be the longest chain after a ‘with ... and ...’ that I’ve seen on a movie poster. Four names, when the device should by nature, recall just two.

Obviously, correct me if you can find any longer examples, but being wordy and film-related content to this film just seems to be a pattern (Dunkirk is the first film to have four adjectives for each of its 12A-induced classification issues, as I outlined here).

The principal young British actor in Dunkirk (the one that’s pictured on the DVD cover) is Fionn Whitehead, who’s freckly face and lean frame render him a prime twink. (Sidenote, but, with Timmy Chalamet in Interstellar and Fionn and Harry in Dunkirk, is it fair to say Christopher Nolan might have a type? ;) )

He was at the London Film Critic’s Circle on Sunday representing Dunkirk’s producers (husband and wife who met at UCL), Christopher Nolan and Emma Thomas, to accept Best British Film, and his palpable nervousness was all kinds of adorbs:

I’ve been surveying the eight Oscar nominations Dunkirk received, and come to the conclusion that it has one shot, which, to paraphrase Hamilton, it is hopefully not throwing away – Editing.

Here are the other seven categories it’s nominated in, and why, at this moment in the awards race, I think it won’t triumph in them:

Best Film: The Shape of Water will win

Best Director: Guillermo Del Toro will win for The Shape of Water

Best Cinematography: It’s commonly believed that Roger Deakins, who has been nominated 13 times prior to Blade Runner 2049 but never won, will finally win.

Even tho I really think Dunkirk deserves this, I don't take too much umbrage with this as Deakins photographed my favourite film of all-time, The Shawshank Redemption. And to be the bridesmaid and not the bride a fourteenth time in a row seems a tad brutal!

Best Production Design: I imagine either Blade Runner 2049 will win for sheer scope (at a projected $180 million, it was a very expensive film) or The Shape of Water in keeping with goodwill for the film

Sound and Sound Editing: I feel Dunkirk deserves at least one of these, but a lot of Americans complained they couldn't hear what there was of the dialogue, so I fear that'll exclude the film's chances. I doubt The Shape of Water will win this, so I reckon Blade Runner 2049 will win one, and Baby Driver will probably win the other.

Original Score: Dunkirk definitely deserves this. What Hans Zimmer achieved in Dunkirk's nerve-wracking score was nothing short of extraordinary. He also deserves it for the cumulative effect of being passed over for his amazing soundtracks to Inception and Interstellar for far more inferior music (The Social Network and The Grand Budapest Hotel, respectively).

So that just leaves Best Editing.

Annoyingly, Dunkirk had to share Best Editing honours with the in your face cuts of Baby Driver (Baby Driver is the most tryhard film I’ve seen since The Big Short) at the Critics’ Choice Awards, but at the actual Editor’s Guild, the ACE, Dunkirk won Best Editing in a Drama, and Baby Driver lost in Best Editing in a Comedy to I, Tonya, which bodes well for Dunkirk (unless I, Tonya surprises at the Oscars).

But, I, Tonya wasn’t even nominated for Editing at the BAFTAs, and I will watch with baited breath to see who the British give this award too. In the past few years, BAFTA have been a very good weathervane for this award and arguably had some clout in the voting – up until BAFTA gave Hacksaw Ridge the prize last year, La La Land was considered by many prognosticators to have Editing in the bag. The Oscars mirrored the BAFTAs and gave it to Hacksaw Ridge.

There’s also the trifling matter of the fact that Lee Smith bloody deserves it. Nolan’s narrative threads of the land, sea and air components of the Dunkirk evacuation, and how several periods of time from the pinnacle moment converged, were interwoven geniusly.

I also love how seamless the editing in Dunkirk felt, and how the narrative strings connected so fluidly. I'm a strong proponent of the best editing being when you can't detect it, which was most certainly not the case with Baby Driver, where every cut felt signposted.


Baby Driver may have had the most editing out of all the films nominated. It didn't have the best.