A Look Ahead to Best Original Score

I’m at a much better position now than I was this time last year in terms of proportion of Oscar-nominated films viewed, and there are a fair few categories where I’ve seen all the nominees!

I sadly don’t have the time to analyse every category before Oscar night, but I will attempt the odd category, starting with Best Original Score.

My personal rankings, from least favourite to favourite, and a mark out of five, as I did with Best Supporting Actor last year. 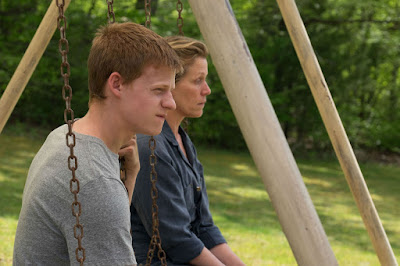 05. Three Billboards Outside Ebbing, Missouri – Carter Burwell
Although I love Carter Burwell’s swooning scores usually (I maintain he deserved the win in 2016 for his romantic score for Carol and even his Twilight music is very underrated), his erratic, tonally jarring composition on Three Billboards encapsulates all of the film’s problems when whiplashing from devastating tragedy to LOL comedy in a matter of seconds.


The score, like the film, can’t decide whether it wants to be an old-fashioned Western, a redemption drama or a black comedy in the vein of In Bruges. Thus, whilst the music in the film is certainly competently scored, it jars and even at times feels a little manipulative. **/*****

John Williams’ score for Rian Johnson’s space opera has all the expected flourishes to generate excitement, intrigue and feelings of jeopardy. Williams is an old pro and he dextrously employs instruments – the playful strings evoke Harry Potter and the trusted horn gives The Last Jedi a sense of majesty. ‘The Supremacy’ is my favourite track from the OST for the marvellous way the instruments dance around each other.

Perhaps because I felt a certain disconnect with The Last Jedi, the score didn’t imbue me with child-like wonder and nostalgia for the Star Wars franchise in the way that his great work on The Force Awakens did (which he also received an Oscar nomination for), but this is still an accomplished score which traverses the film’s motif of light and dark. ***/*****

03. The Shape of Water – Alexandre Desplat 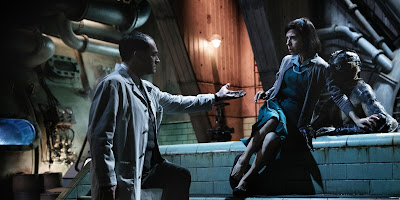 Desplat’s score to Guillermo del Toro’s romance between a human woman and amphibious sea creature is typically fantastical. He employs a dreamy harp and whistling theme (the whistling is carried out by Desplat himself) the evoke the waves of water. In The Shape of Water, Elisa lives above a cinema, and an accordion is used throughout the score to hark back to classic era Hollywood movies to mellifluous effect.

The Creature in The Shape of Water gets his own theme, an ominous, quasi-Jaws like piece. Elisa’s Theme captures the protagonist’s goodness and optimism, with the central flute flying gaily, no doubt encapsulating her delight at finally finding love. At times, the quaint nature of the score feels a tad cloying, particularly as the film contains some aversive scenes and the elaborate richness of the score seems at odds with the gritty visuals.

Whilst the music in The Shape of Water is certainly very pretty and dainty, it did not linger in my memory. Desplat has done much better – Birth, Girl with a Pearl Earring, Syriana, to name a few, and for him to win a second Oscar for this perfunctory score simply because the film is the Best Picture frontrunner, feels a tad uninspired to me. But then, Justin Hurwitz’s score to La La Land won this category last year, so ‘whimsical but generic’ seems to be the Academy’s taste when it comes to film music. ***/*****

02. Phantom Thread - Jonny Greenwood
Paul Thomas Anderson’s curio of a film, said to be Daniel Day-Lewis’ last acting role, revolves around Reynolds Woodcock, an over-grown toddler of a fashion designer and his complicated relationship with his lover and muse, Alma. Greenwood’s intelligent score deftly reflects this love story, whilst staying abreast of changing power dynamics between the two. 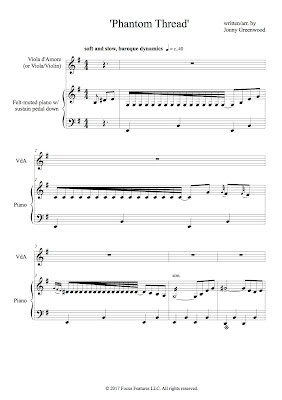 The film’s theme, ‘Phantom Thread’ is a simple but sophisticated piece of composition. The way the piano and viola (the only two instruments in the piece) take turns to play the theme, occasionally stealing the tune from each other, conveys the constant gamesmanship between the film’s leads in a swooning, beautiful duet.

The rest of the score, featuring luscious piano-playing and an elegant theme, encapsulates the beauty of the Chelsea fashion world that Woodcock inhabits. The carefree, wondrous feeling of falling in love is reflected in the swelling strings. Yet, the occasional moment of a suspicious bass, or an eerie tune, hints at the confusion and helplessness that Alma feels at being so attached to a difficult man.

With a 60-piece orchestra, Phantom Thread is by far the most textured of soundtrack in a PT Anderson film, and Greenwood makes every instrument count. Rarely has a film score so deftly thumbnailed the multi-faceted nature of falling in love with abandon so astutely and gorgeously. And this from the composer who gave us those screeching, intentionally grating strings of There Will Be Blood! Greenwood sure is a versatile one. *****/*****

In any other year, Greenwood’s score for Phantom Thread would comfortably be my choice for Best of the Year. My favourite score of 2016 was Nicholas Britell’s brilliant work on Moonlight, yet I consider Phantom Thread superior composition work to that. But were it not for…


Sound and music heighten the sense of tension, with emphasis on the desperation of people fighting for survival.

Given that the BBFC are a film rating body, who’s sole job is to outline any contentious issues in films so parents know ahead of viewing them with their kids, they are generally very coy about the quality of the film. So for them to say that, is a testament to the sheer potency of Zimmer’s score.

Dunkirk is, unusually for a war film, completely devoid of backstory. Whereas Interstellar’s score wore its heart on its sleeve, Zimmer refrains from injecting emotion into his Dunkirk score. In the Dunkirk evacuations, there was no time for feels; survival was the soldier’s only objective.

This force of will is depicted in pieces like ‘The Mole’, whilst 'Supermarine', an interesting companion to 'Mombasa' from Inception in terms of pieces to jog to on the treadmill, seriously amps up the tension - and doesn't relent for a second.

The discordant notes throughout the soundtrack convey all manner of peril associated with the three story arcs, whether it be Tom Hardy's pilot running low on petrol, Cillian Murphy's shivering soldier refusing to return to the place he's trying so desperately to flee, or the malcontent and mistrust between Harry Styles' soldier and a possible French mole.

The employment of a pocket watch - Christopher Nolan's, in fact - could have been gimmicky in a lesser composer's hands. In the talented hands of Hans Zimmer's, the tick-tocking soundtrack filled the viewer with apprehension; that time could run out any moment, for any of the characters. Coupled with the intense visuals and the time frames converging to one point, and my nerves were frayed.

The scene which resonated for me most in the film was when Fionn Whitehead and Harry Styles et al finally get back to England, and the soundtrack is inflected with shades of Elgar’s Nimrod – a staple of sombre British occasions such as funerals.

Elgar's seminal theme is hinted at, but as it builds to the crescendo, the climax of the piece, the composer pulls away from a full-blown imitation, almost as if he feels embarrassed about something. This is mirrored in the dialogue, when an old man congratulates the soldiers, and Styles’ Alex, really not feeling worthy of the adulation, mutters, ‘all we did was survive’.

For his Dunkirk score, it was like Hans Zimmer knew exactly what Christopher Nolan wanted (maybe Nolan incepted his vision in Zimmer's mind? #nichefilmbanter) in terms of portraying the unpleasantness of war, and his score thoroughly contributes to the visceral dread, and, in BBFC parlance 'sustained threat' of the unforgettable viewing experience that was Dunkirk.

Who will win: Alexandre Desplat, The Shape of Water
Who should win: Hans Zimmer, Dunkirk
Desplat beat Zimmer in 2015 when his score for The Grand Budapest Hotel triumphed over Zimmer’s work on Interstellar and it looks like history is set to repeat itself.

Hmm it looks like your blog ate my first comment (it was extremely long) so I guess I'll just sum it up
what I had written and say, I'm thoroughly enjoying your blog.
I as well am an aspiring blog writer but I'm still new to the whole thing.
Do you have any tips and hints for beginner blog writers? I'd really appreciate
it.

This paragraph is genuinely a good one it helps new internet people,
who are wishing for blogging.