I’m working through a huge backlog of restaurants and bars from which I have photos, including places I went to as far back as in 2014!

My trip to The Royal Horseguards was using a Groupon deal, £29 for a pitcher of cocktails and a sharing platter. Here they are pictured below: - 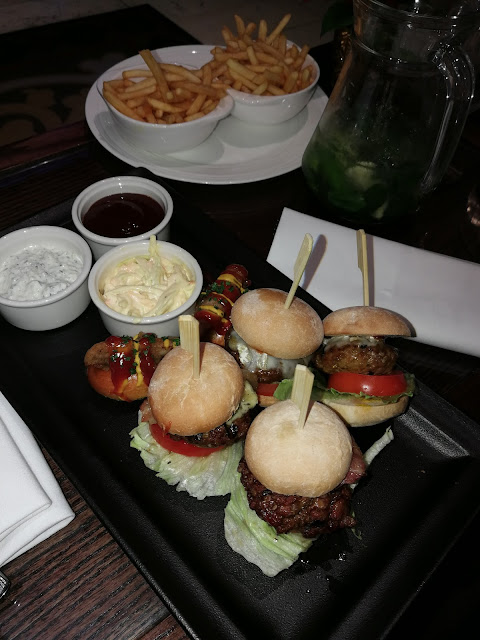 When it comes to voucher deals for drinks and sharing platters, I’ve tended to find the drinks deliver, but the food is phoned in and shoddily made (likely by bar staff who can pour a mean drink, but have limited cooking skills).

Unusually, The Royal Horseguards had the converse scenario. The burgers were immensely satisfying – rich, flavourful slabs of meat, well-seasoned and prepared. The chips were deliciously fried. The dressing and the filling of the burger were surprisingly well-thought out and of high quality.

The drinks, on the other hand, were disappointingly watered down. Slug and Lettuce cocktails are drinks I hold up as the pinnacle in ‘all fruit juice, no alcohol’, but this place was as bad. I’d argue worse, because Slug and Lettuce is a fairly cheap-looking pub that does not purport to be some elegant bar. For punters who paid full price for a pitcher of Mojito here, they’d be swindled.

The Royal Horseguards had a very upmarket vibe. My friend and I went on a Friday night, when all the pubs in the Westminster area were absolutely rammed, and far too loud to conduct a proper conversation in. Thanks to the chatter from the hotel guests, as well as people inside The Royal Horseguards bar, there was still an atmosphere, but, graciously, no overbearingly loud music, meaning you didn’t need to shout across the room just to communicate.

If you’re not above sneaking alcohol into bars, this Groupon deal would be vastly improved with a small bottle of gin or vodka tipped into the pitcher of fruit juice. As the domain of the bar spans around several corners and due to the way light travels, the bar staff probably won’t see what you’re doing. And, to be honest, even if they do, they’ll probably turn a blind eye, due to the bar not being the hotel’s main source of income (it’s places like pubs where sneaking in alcohol is regarded as really poor etiquette).

That would make the drink they provide actually taste of alcohol, and thus, the good time this Groupon deal promises, actually materialise.