Continuing with my reviews of bars and restaurants in the Covent Garden is Adventure Bar, which boasts a healthy menu of creative drinks and generous Happy Hours. I probably saved a bit more money than I would have spent in the presence of Happy Hour, with a Groupon voucher that entitled the buyer to six cocktails for £24.

Unlike some other Groupon deals which restrict you in the choice of food and drink you can buy with your voucher, this deal was valid on all the cocktails. An Old Fashioned and 50 Shades of Earl Grey were the first drinks sampled: 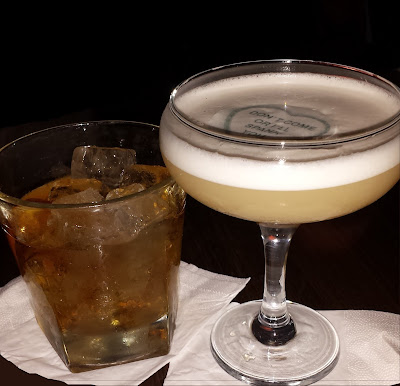 The ingredients of the 50 Shades of Earl Grey were: Grey Goose vodka, Bombay Sapphire gin, Earl Grey-infused sugar syrup, fresh lemon juice and egg white. I must admit I only chose the drink for its banterous name (I clearly did not learn my lesson hard enough from that disgusting drink at The Duck and Waffle), because I would normally steer well clear of any alcoholic beverage containing eggs in. But it tasted alright, and the decent quantities of alcohol meant that the eggy flavour was largely masked.

The Old Fashioned tasted fine; it's one of my favourite drinks so I will always enjoy it, but it did lack the spark that Dandelyan's Old Fashioned sported.

For the next batch of drinks, we went with Looong Island Ice tea and a Flaming Zombie: 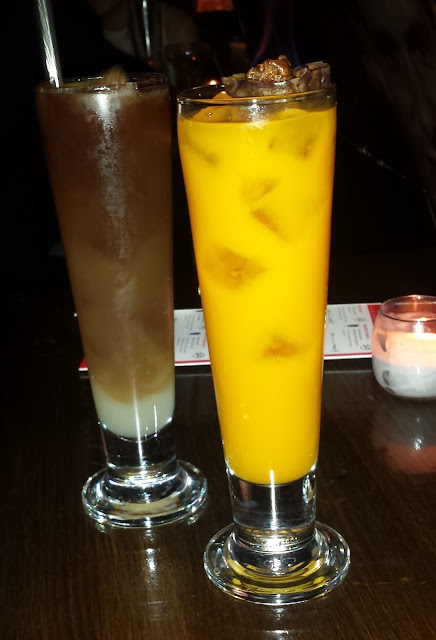 The Flaming Zombie, which looks rather different to the one I had in The Escapologist, did deliver on the 'flaming' part of the bargain, with a passion fruit at the top of the drink being on fire, which is a gimmick I never tire of. The ingedients of Bacardi Carta Oro, Bacardi Carta Negra, triple sec, fresh lemon juice, mango, passion fruit, pineapple juice and overproof rum complement each other a treat.

Finally, we had Mexican butterflies (not pictured), which tasted very nice. I'll say this about Adventure Bar: they definitely don't short-change Groupon holders in terms of quantity of alcohol! I felt super-tipsy by the end of my three drinks, which is how everyone should feel at the end of three cocktails, even if this isn't always the case (Slug and Lettuce's cocktails contain so little alcohol, it feels like I'm more sober after I've consumed them).

The background music choices at Adventure Bar and Lounge were absolutely on point, loads of Britney, girl groups and One Direction, which meant I could listen to the music and bop along. It also meant, graciously, I could drown out this clown girl in my vicinity who was speaking to her friends in raised and whiny tones about why she was refusing to watch Moonlight. #ByeFelicia

The Groupon deal was straightforward to use, and the lady who served me was an absolute doll, explaining that with it, I could open a tab, and thus didn't have to order all six cocktails at once. The only thing that would have made the deal even more worthwhile is if they had allowed its holder to use it on a Saturday, my preferred day for getting drunk. As that wasn't an option, I had to use this on a weekday, which is a shame, because with the levels of drunk I was, I would have preferred to have been so merry at the weekend and then go out dancing afterwards!

Nonetheless, I would recommend this Groupon voucher, and if you don't have that, just visiting the bar during Happy Hour. There's a wide range of cocktails so bound to be something to suit your palate.

All my reviews of restaurants and bars in London that I've been to (using a Groupon deal or otherwise) are listed here. If you'd like me to review your venue, email me at lemon_and_lime7@hotmail.com
Posted by Emma at 3/08/2017 05:00:00 pm