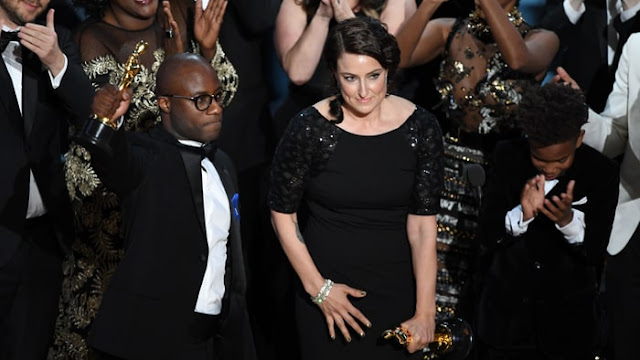 As I said in my prediction post, I didn’t watch the Oscars live on Sunday, because I anticipated a La La Land sweep, culminating in it winning 8 Oscars, including Best Picture.

In fact, it did win six of the eight I’d predicted it to. It did not, graciously, take Best Sound, because the superlative that should be awarded to its sound is quite the opposite of ‘best’.

But the real miracle was that it also didn’t win Best Picture.
For about three minutes, it thought it had. The producers, cast and crew of the movie, on hearing Faye Dunaway shout out ‘La La Land’, piled on stage to congratulate themselves for a self-congratulatory movie.

But then, a twist to rival anything M Night Shyamalan could dream of. Producers (of the Oscars) ran frantically onto the stage to snatch the Oscars off the LLL producers (I lol'd so hard). Jordan Horowitz was met with shock when he announced, ‘Guys, guys, I'm sorry. No. There's a mistake. Moonlight, you guys won best picture. This is not a joke.’

Long story short, due to planners never knowing which side presenters will enter the stage from, there are two envelopes per category. A partner at PWC (the company entrusted with the task of counting the votes) who was meant to be allocating the envelopes to the movie stars was too busy tweeting a picture of Emma Stone (well, it is rare for an Asian actress to win an Oscar) that he handed a duplicate of her Best Actress envelope to Warren Beatty and Faye Dunaway, who merely saw ‘La La Land’ and assumed that was the result.

Epic fail on so many levels, but it was quite amusing to watch a group of moral show-boaters who’d spent the last four and a half hours lecturing people on how they ought to conduct themselves (all the while awarding sex offenders like Casey Affleck) fail at something as simple as allocating the right envelopes. La La Land indeed!

But hubris at Hollyweird getting egg on their faces aside, the right film won. And I’m so utterly amazed it did: an understated, arty, film of $1.5 million budget about a poor gay black man in Miami beat an in-your-face headache that fellates Hollywood incessantly and features Ryan Gosling as the white saviour of jazz.

In terms of Oscar bait, I would have thought the latter would have been much more to the Academy’s tastes!

When I checked my phone on Monday morning and saw Moonlight, I let out a scream of delight and then, inexplicably, started tearing up. I couldn’t help it; the majority of Moonlight, even the emotionally cathartic scenes, were underscored with a deep sadness, and it was so amazing how Barry Jenkins told Chiron’s story with the compassion and sensitivity as if he was telling his own.

Moonlight winning Best Picture meant so much more than just the Oscars correctly recognising the best film of the year.

When I was a snot-nosed brat at 15, I started this blog to follow the Oscar race, because that previous year I’d come Runner-Up of Young Film Critic of the Year and my prize was a Cineworld unlimited card.

One of the films I saw on the card was Brokeback Mountain and it was a film that made me from a film admirer into a film fanatic. I adored Brokeback Mountain. It instantly became my sixth favourite film of all time, and eleven years on, it's still number 6.

So I bloody loved Brokeback Mountain, and as it had won the majority of precursors, I stayed up Oscar night, expecting to see it crowned Best Picture.

It didn’t and I went absolutey ape-shit. Not just because I adored BBM and what a Best Picture prize to a film like that would symbolise for the LGBT community, but because Crash was trash.

Never in my wildest dreams could I have envisioned that Moonlight, which is even less commercial than Brokeback Mountain, could have taken Best Picture from the sugar-coated, bad singing-laden La La Land, which sounds right up the Academy's tree. Especially as Carol, another exquisite LGBT film, didn’t even get a Best Picture nomination last year, with the Academy favouring bloated pieces of mediocrity like The Big Short and The Revenant.

This is for the voices that rarely get heard in mainstream films.

The only downside about that La La Moonlight fiasco is that it deprived the Moonlight crew their time to make a proper acceptance speech, a moment they so richly deserved. Barry Jenkins had to keep it short. But the massive smile on his face said it all; he knew full well that his film had not only won Best Picture, but it deserved it too. 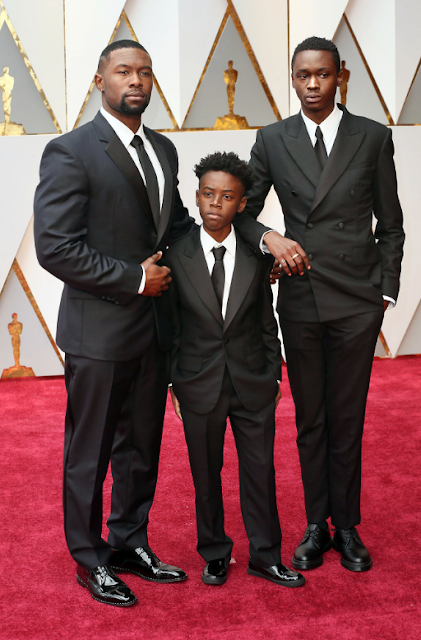 Other tidbits
- So glad Queen Viola won. Lady is such a talent and hella overdue (I'm still salty she lost to Meryl Streep's Margaret Thatcher impression in 2012).

I know I’ve given Blahra Delevingne a lot of abuse post-Suicide Squad, but her shout-out to Davis on Instagram was super-sweet and genuine. Whilst Cara may not be able to act, it’s nice she can recognise someone who definitely can.

Long live Queen V! No one deserves it more than #violadavis 👑 Her endless compassion, dedication and talent are a only a few of the things that make this woman so special. It was an honor to have been in the presence of you working your magic. ❤ #oscars2017 #skwad
A post shared by Cara Delevingne (@caradelevingne) on Feb 27, 2017 at 12:53am PST


- After Auli'i Cravalho performed How Far I’ll Go, Justin Timberlake was the only one who stood up and clapped her. That is such a cute touch; he, as a musician, should know how daunting it can be to perform to such an audience, especially when she’s only 16! I can't believe that shitty La La Land song beat the gorgeous Moana song. Although 'The Writing's on the Wall' from Spectre won last year, so perhaps it's better that How Far I'll Go didn't win. #NoAccountingForTaste

- Miles Teller with all the shade, here. (He was originally meant to take Gosling’s role in LLL)

- I really don’t appreciate the way in the pressroom after, Bugeyes Stone was, on one hand over-the-top going on about how much she loved Moonlight (as if to placate herself), whilst also slyly saying ‘I had my envelope the whole time’, implying that Warren Beatty’s account of the story was wrong and that maybe La La Land was Best Picture after all. Such passive-aggressive behaviour. Go back to dancing badly, Felicia.

- Also, lol at La La Land's director Damien Chazelle skipping the pressroom altogether because he was pressed his film had lost. You've just won Best Director, mate (undeservedly, that should be Jenkins'). Quit your sulking.

- I'm just gonna say it: BAFTA are racist. They crowned Brokeback Mountain Best Picture in 2006 and are generally LGBT film-friendly, yet Moonlight did not win a single BAFTA and Dev Patel, who was wooden AF, beat Mahershala Ali! On top of that, Denzel Washington and Morgan Freeman have never been nominated for a BAFTA (WTF).

For example, this year, Jake Gyllenhaal's unwatchable overacting in Nocturnal Animals got nominated for Best Actor at the BAFTAs, yet Denzel in Fences was snubbed. WTF.

Also, who crowns Jennifer Lawrence in American Hustle over Lupita Nyong'o in 12 Years a Slave?

If you have any explanations for these patterns other than the BAFTAs being racist, I'd love to hear them. But I'm glad they've been shown up for the mugs they are by Moonlight winning Best Film at the Oscars.

Because that's what it was the best film! 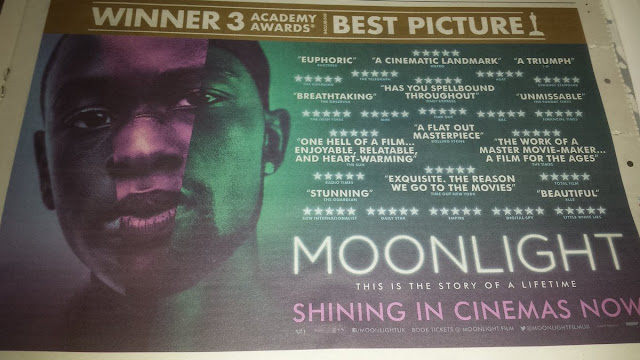