Today, I watched The Place Beyond the Pines, Derek Cianfrance's ambitious morality tale of how an encounter between bank robber (Ryan Gosling) and rookie cop (Bradley Cooper) affects their lives long after the meeting. I wasn't exactly sold on it; the three acts in the movie deteriorated monotonically, with the most gripping set pieces all being at the start of the film. The final act of the film focuses on the interaction between the two characters' sons, and the scenes between Emory Cohen and Dane DeHaan felt like a blasted mumbling contest.

Overall, I was mightily disappointed with The Place Beyond the Pines; there were some good elements: Bradley Cooper was as nuanced and as convincing as I've seen him (I usually can't take him seriously because he's appeared in some godawful Jennifer Lawrence collaborations and both of them bring out the worst in each other, especially when David O. Russell is involved), and the scenes between Ben Mendelsohn and Gosling were nicely done. Based on their chemistry together, I can see why Ryan Gosling chose to cast the Australian in his own movie, Lost River, 2 years later. You even get a tiny glimpse of Mendelsohn's terribad dancing, one of the few redeeming features of Lost River, in this movie. 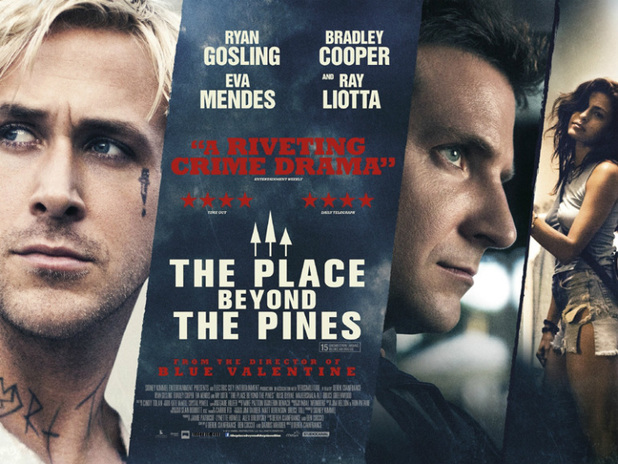 But another gripe that I had with The Place Beyond the Pines that was no real fault of the filmmakers themselves was the sheer inaccuracy of the billing of Ray Liotta in the film poster. The way Liotta is credited here gives the (misleading) impression that he's the fourth main character in the film. He ain't. Gosling and Cooper are the co-leads, then Eva Mendes, then Dane DeHaan and then Emory Cohen. Ben Mendelsohn features in the first and third acts, so he would take sixth precedence. Being generous (and it would be being very generous), Ray Liotta is the seventh main character in the film. At best.

I mean, don't get me wrong, I can see why they did it. Although DeHaan and Emory Cohen are now gaining status and their acting technique has definitely improved (Cohen put his mumbling Brando impression to far better use as an adorable suitor of Saoirse Ronan in 2015's Brooklyn and you know he was good because I don't even begrudge him stealing Domhnall Gleeson's thunder), they weren't that well known in 2013, when the film was released. Whereas Ray Liotta is properly famous, not least for his iconic performance as Henry Hill in Goodfellas. So they were riding on the fame of his name. Fair enough, given the calibre the star they had on their castlist (Liotta's combination of charisma, screen presence and intense-eyed gaze renders him one of my favourite actors). 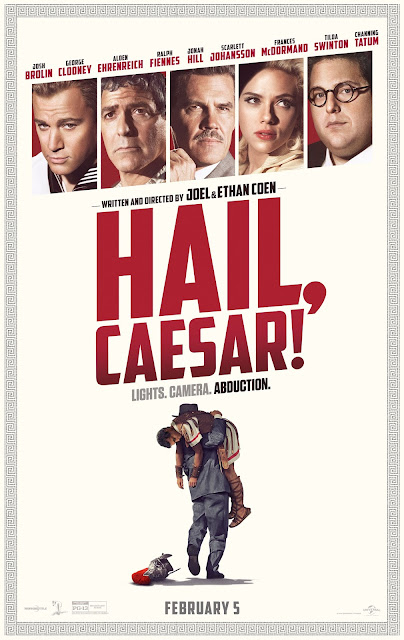 An even more brazen case of erroneous billing of an actor immortalised by a Martin Scorsese picture would be the combination of the name order and the appearance of a photo of Jonah Hill in the Hail, Caesar! poster. The fact that he's one of the five pictured could let you think he's one of the five main characters. He ain't. His role in Hail, Caesar! is genuinely that of a cameo, lasting less than a minute. As a huge Jonah Hill fan who's two main draws to this picture were the Coen brothers and him, I felt mightily short-changed.

As with Emory Cohen and Dane DeHaan getting trampled over in the Place Beyond the Pines poster, the biggest loser here is Alden Ehrenreich, who stole the show in Hail, Caesar! and if there were any justice in the world, would be in the running for a Best Supporting Actor nomination for what was a warm performance as a rodeo-come-actor who struggles with his lines of on point comic timing. Ehrenreich's role was the size that I had thought Jonah would be getting. Boy was I wrong about that, but it seems bizarre that the best thing about the film doesn't even get his picture on the poster.

Obviously, worse things have happened, and the world will keep spinning. And I can't begrudge Hollywood studios for trotting out their big names ahead of the lesser-known chaps, even if they had more prominence in the film. Money does talk, after all. And in both Ray Liotta and Jonah Hill's case, they succeeded at tricking me. By misrepresenting the magnitude of the actors' screen time in their respective movies on the film posters, the films' distributors lured me into watching the film under false pretences. I'm just too much of a Marty Scorsese fangirl for my own good, goddamnit!