Ever since its inception, Orange is the New Black has been one of Netflix's USPs. Very loosely based around Piper Kerman's memoirs of her experience in jail, with Taylor Schilling playing the televised version of her character, 'Piper Chapman', the show has never failed to entertain, shock, amuse and trouble viewers. Season 3 was considered by some critics to be a slight misstep, but even so, the stakes were high for season 4, which, thanks to the way in which Netflix drop a whole season in one go, I devoured over the weekend it hit.

With Litchfield Penitentiary becoming privatised, the MCC are keen to squeeze as many bodies into the jail-space as humanly feasible. By viewing prisoners as currency, however, they do not consider the factions that could occur by the simple mathematical probability from there being more people. This manifests itself in the form of strained race relations that arise when there is a surge in the Dominican inmates, and a group of white supremacists who resent the way they've asserted their authority. Piper Chapman, who, in a late, rare moment of self-reflection, admits she wanted to 'win prison', unwillingly stokes the tensions between the two groups, only to see herself branded (in more than one way) as a racist herself for her unthinking egotism.

In order to keep these brawling inmates in line is the introduction of Captain Piscatella (Brad William Henke), a giant of a man who takes no prisoners and regards the women of Litchfield as absolute scum. Piper's manufactured, wide-eyed charm that may have twisted the arm of a warden or two in the past simply doesn't work on Piscatella, who has seen it all before and bought the T-shirt. His unconventional methods for showing the inmates who's in charge are met with opposition by Warden Joe Caputo, which makes for a power struggle between the two of Shakespearean magnitude. Caputo tries to do what is best in the majority of situations, and the unenviable juggling act of of running a prison with  insubordinate prisoners, sly, thuggish officers and a big corporate sector who wishes to monetise the jail to an inch of its life are really highlighted in season 4 of OITNB. Nick Sandow is extremely effective at humanising Caputo and at times one couldn't call who has it worse -the mistreated inmates of Litchfield (not having enough sanitary towels to go around so that menstruaters had to stick tissue inside themselves was a new low), or the hapless Warden overseeing them all.

Other plot strands of season 4 include sadistic officers who like to toy with the prisoners for their own entertainment, Lolly and Alex struggling to deal with the albatross of their defence-killing of one of Kubra's cronies, and Maria Ruiz emerging as initially unwilling leader of the Dominican girls. This reluctance is illuminated in her flashback episode, 'Power Suit', where we learn that her father was a low-level kingpin for people from the Dominican Republic, and, such was her distaste for his antics that she turned her back on him to live with a Mexican guy. Another interesting flashback is Maritza Ramos, by far the most striking girl in Litchfield, who used her beauty to trick car dealerships into leasing her fancy cars for a test drive, under the misapprehension that she's some rich old man's trophy wife. Watching flashback!Maritza untangle herself from a quagmire this gets her into is one of the funniest parts of season 4. Had I been a betting woman (which I'm obviously not. Ahem), I would not have wagered Maritza was incarcerated for Grand Theft Auto, showing, once again, that the employment of flashbacks in this show can completely toss your preconceptions of characters out of the window.

Elsewhere, romance blossomons between annoying hippie Brooke Soso and Poussey Washington, the likeable class clown of Litchfield. The two are beyond adorable together, and Kimiko Glenn and Samira Wiley deserve kudos for crafting a romance that is organic, believable, and so full of love and hope. Judy King - a famous TV chef - gets sent to Litchfield for tax fraud, to which Poussey, a big fan, becomes turns into a starstruck fangirl whenever she's around. Brooke, in the way only Brooke can, tries to relieve her of her awe around Judy, only to cast some offensive aspersions of her own. This illustrates Brooke's narcissism and inclination for the farfetched, which is illustrated in her flashback. But in seeing how much her casual assumptions have hurt her girlfriend, Brooke gains the self-awareness that she never had when she was doing the same thing in the free world. It is a pleasure to learn each individual character's histories and see how much bad life choices and circumstance plays in them winding up where they are.

Orange is the New Black also very sensitively continues with the fallout of the Pennsatucky's rape in season 3 by officer Coates. Her friend, the confrontational man-hating Big Boo, is, understandably furious. Pennsatucky also feels some anger, but mainly sadness, and the show graciously gives her some closure (after season 3's 'A Tittin' and a Hairin'' episode, watching her character being raped twice in the same episode really was too much). It's amazing how much Pennsatucky has grown since her intolerant, evangelical Bible-bashing days of season 1, and there's something rewarding about watching her help Nicky through going cold turkey; the Doggett of old would never have done that. Taryn Manning excels at her portrayal of a multidimensional character who could have so easily descended into farce.

In fact, Orange is the New Black is one of the few shows where I am yet to see a dud performance. Uzo Aduba usually reaps the awards come Screen Actor Guild and Emmy time, and she is indeed brilliant as the unhinged Suzanne Warren. But I think Aduba's best acting, and baitiest scenes, were in season 2, when the manipulative Vee took her under her wing. The acting love needs to be spread more evenly in the next round of Emmy's, and there's a plethora of choice.

Samira Wiley deserves a lot of love for making Poussey so awesome and lovably goofy, and injecting real passion into her and Brooke's tender romance that makes the audience root for them in a way we don't to the blah Piper/Alex romance. Hearing the two discuss their plans for getting their life on track after leaving prison was almost tear-inducingly optimistic. As Taystee, Wiley's fellow Juilliard alumnus  (hot dang, does Juilliard produce some talented dames!) Danielle Brooks, gets appointed Caputo's P.A. this season. In doing so, Brooks shows incredible diversity in her acting range, first in her hilarious keenness for the secretarial role, complete jazzing up her prison attire and demanding a watch, but later, when tragedy hits, her character's raw reaction to the event in question is really upsetting to watch, and nails the pathos of Orange is the New Black. Taylor Schilling, Natasha Lyonne, Kate Mulgrew and Yael Stone are a few other standouts from the supremely talented ensemble cast.

In season 4, Orange is the New Black might have hit its peak. The frank, earthy dialogue is absolutely hilarious, but it would be nothing without the cast to deliver it so well. Case in point: Cindy's sass when her new roommate dares her, "'You really want to go there with me?" and, she retorts "Oh, went there, bought a house, moved in, bitch. And now I'm remodelling the kitchen." Furthermore as with Brooklyn Nine-Nine, another New York-set show of a somewhat different flavour, the pop culture references come thick and fast in the everyday conversations of the inmates, but in a natural, unforced way that both illuminates the gaps in characters' knowledge ('The Hungry Games' will never get old) and occasionally flirts with the meta (all those Walking Dead and Game of Thrones references hint at some foreboding). 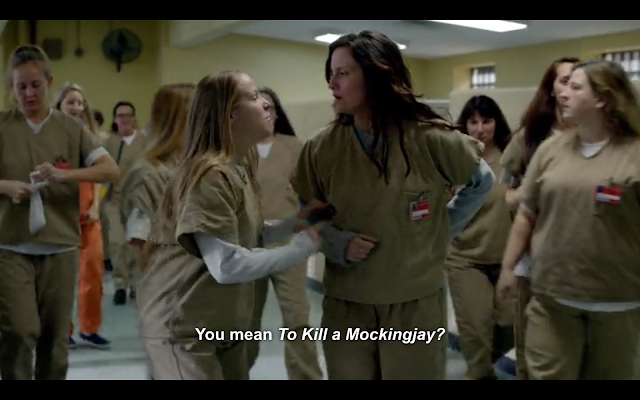 OITNB has always modulated between comedic and dramatic scenes with a kind of irreverence that made my eyes water (who can forget the employment of 'Cellophane' as the credit song as a character was being pummelled to death by rocks wrapped in a cellophane bag?) But in season 4, the catalogue of the prison being overfilled and understaffed and inmates' hatred of each other was never going to end well. When the collateral damage occurs, it's undoubtedly one of TV's most heart-breaking moments; almost George R.R. Martin-esque in it's 'SCREW YOU, WRITERS!!!!!!!!' brutalness. The sheer injustice of it all had me weeping. But I could recognise the significance of it to the show. That's prison. And that's also life. Sometimes, the good die young.

It's the mark of such a fantastic show that OITNB offers wit, morality and the hint of redemption (or further deterioration?) at the climax. June 2017 can't get here fast enough.

eToro is the ultimate forex trading platform for rookie and advanced traders.