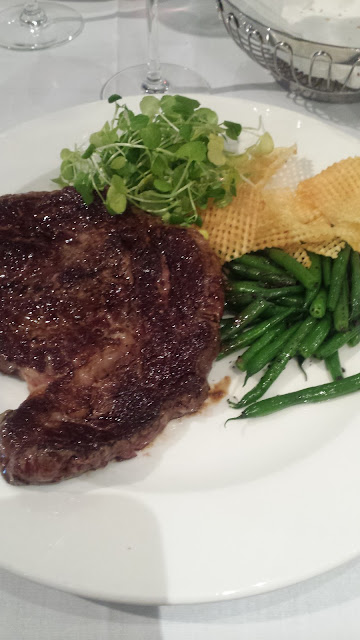 Last April, I went to see Madame Butterfly at the Royal Opera House. It was an exquisite performance that moved me to tears. Before the show and during the intervals, I drank and dined at the Amphitheatre Restaurant and Terrace, which I will now give a review of.

I'm generally wary of dining at restaurants that are part of the institution where the opera/ballet/concert is, because I worry that they'll be an afterthought to the building; a way for the owners to make a quick buck, rather than put any real thought into feeding their punters. Having visited this place, I think my reservations were correct.

Unsurprisingly, given the rather eye-watering price tags, the food was presented well enough, if not quite the same level in terms of taste. The steak pictured above wasn't the most delicious I've had the pleasure of tasting in London (that would have to be the transcendent Hawksmoor), but it wasn't the worst either. But, for the price paid, you'd hope for a little better than 'not the worst steak in London'. It was the chewiness that I really could not get on board with; as much as I like rare steaks, this tasted rubbery. Ew. 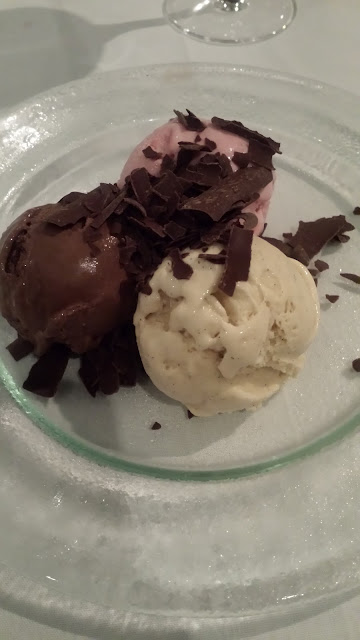 One aspect of Amphitheatre Restaurant and Terrace that was excellent was the service we received. The waiters were obliging and charming throughout, and I was very impressed with the organisation of the staff working at the restaurant, for, the second we returned to the restaurant at the interval, our dessert was waiting for us.

I had three flavours of ice cream; a tad overpriced at around £10 for what it was. It tasted fine, but the £1.99 ice cream tubs you get in Tesco taste exactly the same, minus the chocolate shavings ornamented on them. So I wasn't too impressed with the mains or the dessert.

As with The Savoy, extravagances like this where we unleash our inner Iggy Azalea and inwardly holler I'M SO FANCY are only one-in-a-year-type things. In terms of food quality, The Savoy far surpasses Amphitheatre and Terrace. In fact, it's fortunate for the Royal Opera House that their production of Madame Butterfly was so on point, or I'd be even more scathing in my critique of the restaurant; clearly a get-rich-scheme for the owners. They're laughing all the way to the bank. We're still struggling to cut up that rubbery steak with our incisors.