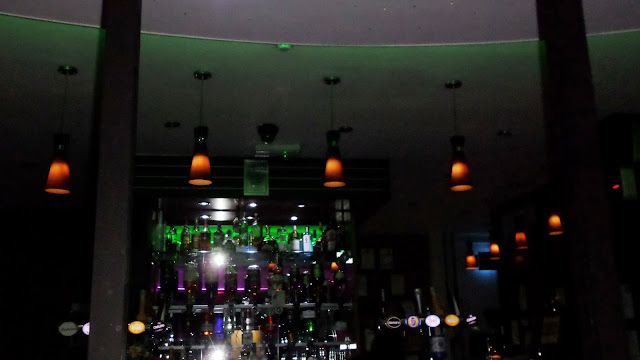 With a distinctly bar-type vibe to the place and Las Vegas-level brash lighting, Raw Spice was different from any other Indian restaurant I’d been to before. Thanks to a menu that offered a lot of range as well as my mate's Tastecard, I ate extremely well, and huge quantities (with enough to take home for the family), for just £12 covering tip! Glorious!

Between us, for mains, we ordered a lamb dish, a chicken dish, and a prawn dish. We also had two portions of rice (which as you can see in the photo, is a pretty healthy portion), two starters and some naan bread to share. They were all brilliant, and thanks to the kitchen cooking all the meat dishes on mild, they were tangy without causing my nose to run and eyes to water, which is all too common an occurrence when I visit Indian restaurants, unfortunately.

The best dish was the prawn one, which graciously actually had prawns in them (I went to another Indian restaurant the following day and there were about three prawns in total in the plate I’d ordered; disappointing to say the least). The other two meat dishes didn't skimp on actual meat either, which was refreshing, because usually in restaurants they'll excel at a couple of dishes but sell you short on another. No such case here. The “chicken lollipops” which we had as one of our starters weren't, as I’d feared, undercooked or over-seasoned, but rather, totally edible as a meat-on-a-stick type thing and didn't even require any sauce, so crunchy and spicy were they on their own. Compared to other restaurants in London, booze was also extremely well-priced (in the range of three quid rather than four or five), and the menu boasted some fantastic cocktails and mocktails, all very-well created.

Possibly the only foible with the place was the service, which was a little pushy, a little patronising (we'd arrived before the kitchen opened, 6. We were told that fact, and we gladly said we'd have drinks in the meantime, but then they hammered the point home that the kitchen didn't open until 6, as if we were thick. C'mon now). I would also suggest that they could have offered us a wider range of dips to come with the poppadoms (there were two, I'm usually used to three or four in other places) But in terms of food (both palate of flavour and geneorisity of dishes), vibe, and value for money, bung a Tastecard along and you really can’t do much better than Raw Spice.