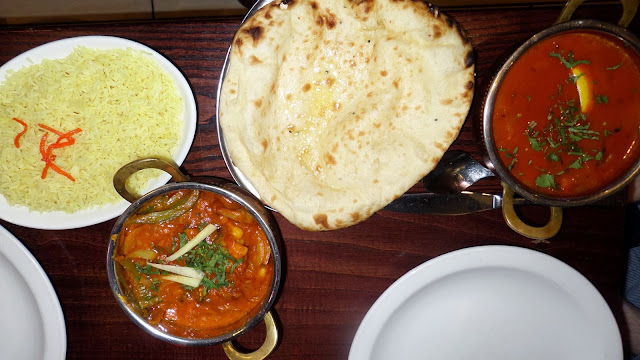 Following the roaring success of Raw Spice, here was an Indian restaurant I was far less impressed with. As with the previous place, I ordered a prawn dish, as I thought I’d compare the quality between the two kitchens. It was distinctly lacking here – there was plenty of jalfrezi, but basically no prawn. On closer inspection of the vegetables in my dish, and I’d be extremely surprised if they weren’t past their sell-by-date, and the cooks had clearly piled in the spices thinking “Jalfrezi! Ah! That means spicy!” without any consideration for the customer’s taste buds. I was not happy, particularly given the menu makes it sound like they were going to be generous with the prawn quantities. The other dish, the lamb pathia was even worse. Liquidy and runny, it was basically an extremely spicy soup! Such was the consistency and the hotness; it also meant that barely any of it could be eaten. So there’s your waste of food, which only exacerbated my mood (I hate leaving leftovers).

The pilau rice was pretty uninspired, meaning that the highlight of this excuse of a meal was probably the coconut naan bread; the one item the kitchen managed not to fuck up. And if the bread was the best thing about the culinary experience that is dining at Massala Hut, you know it’s not going to be somewhere I’m recommending to friends.

Interesting point of view and I agree with most of what you say.You've made some valid points and I think you're spot on. buy steroids Australia