Continuing with my penchant for buying food package deals off LivingSocial/Wowcher/Groupon, I forayed back into Wowcher, despite the last deal I got from them being an exercise in false advertising. This time around, the restaurant didn’t so much do differently as it said on the tin, as the reality and the pretty photos placed online being absolutely worlds apart.

Here is what we really had, take in the grubby-looking chipped plates and the unwelcomingly sad looking sushi: 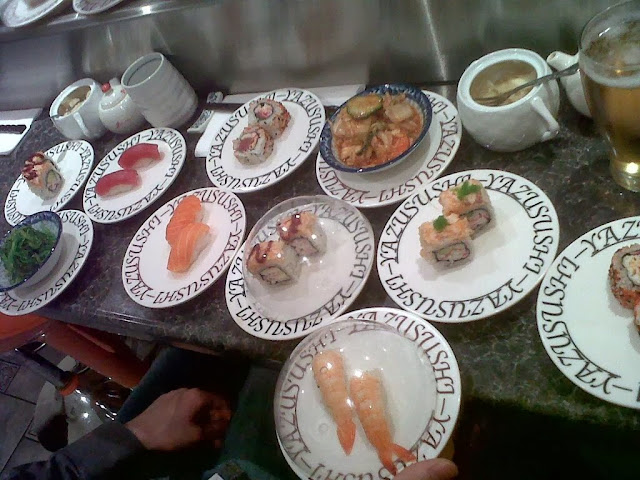 And this is how the sushi was presented on the website. Notice all the glowing wonderful colours that were missing from the real photo. 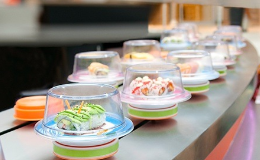 As for the meal itself, the fish, rice and vegetables were all cooked pretty proficiently, despite the ridiculously small portions (look at that prawn! Look at it! Not looking? That's cos there's barely any there). The tinyness of the food did mean that we ate everything in one bite, and didn't get enough time to savour the taste. However, I haven’t contracted food poisoning yet, a miracle in itself, given how grotty the surroundings were. Let me paint a picture for you: you know how in Yo Sushi, there’s about 10 conveyer belts, and people sit around one of the 10 conveyor belts? Well, Yazu Sushi WAS just one of the conveyor belts. That was it.

Add in the fact that the owner of the restaurant was utterly unwelcoming, greeting me with the kind of abruptness that I’ve come to expect from Chinese folk, but I expected better from the Japanese. His frosty behaviour reached Alan Partridge-levels of hilarity when he told me, about three times, that I was occupying too much room around the conveyor belt, and he practically manhandled me into the corner (so there's yer sexual harrassment) where I was so cramped, it was amazing I could even breathe.

Thus, whilst the food was well-cooked enough, all I can really remember about eating there was the measly portions; inspect the photos for yourself if you don’t believe me. Never in a million years is that enough to feed two people! Factor in that we had a surly host, and frankly, Yazu Sushi is lucky that I’m not giving it an even lower grade.

interesting and very straight forward comments (however there supposed to be the critics ethics)..,
I was trying to find some reviews about the sushi place in Mayfair, I think this is over exaggerated review about this small place. I think the staff is friendly and yes you cannot take too much space it's common sense if you look at the space around the conveyor. In my opinion the sushi is good and genuine. Of course I did not expect 5 star service.

Colmon: if Yazu Sushi offers me a free meal, I'll be happy to alter my opinion.