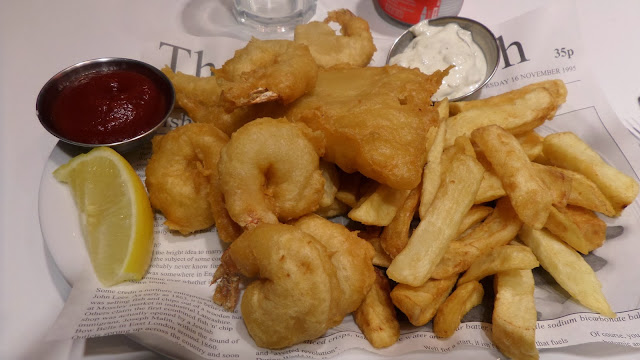 London Fish & Chips has a pretty prime location, just off the Strand. There are two floors for seating (for which you'll have to pay above the rate which you'd pay for just a takeaway). The experience was.... eh. Firstly, they only had two waitresses manning the two floors, meaning they got orders mixed up, and I asked for a tartar sauce that never arrived. This was extremely vexing because the waitress had promised to bring it, and as such, I'd paced myself such that I ate about half of my meal, dipping it all over the tartar sauce, and when the second tartar sauce didn't arrive, I had to eat them bare. EH. This was extremely different from how I'm used to things at work, where all the tartar sauce is out in a plate and we can help ourselves. That's how it should be. That wasn't the end of the poor service though, oh no. The woman on the till when I was making my order was extremely curt. Admittedly, I was taking a bit of time to decide, but she was so short, just saying "do you want to go over there and decide?" There wasn't even anyone behind me in the queue! Charming.
As for the food itself, it was acceptable, not amazing. The fish tasted better than the chips, which were utterly stale and I had to cover in vinegar to be able to taste anything. The tomato ketchup was awful! So runny. They must've bought it from Costco, so there's your class. Overall, the whole dining experience is not worth the high amounts (in excess of £10) you'd be paying for it, and you're much, much better off just going to your high street.
Grade: D-

If you want your ex-girlfriend or ex-boyfriend to come crawling back to you on their knees (even if they're dating somebody else now) you got to watch this video
right away...

(VIDEO) Text Your Ex Back?