Little Mix’s second album is as bright and bold as their previous, with the girl group having newfound swag from their globe-trotting exploits to add to their music-making. As with DNA, Little Mix take co-writing credentials on the majority of their album, meaning that Salute is truly the concoction of fierce foursome Perrie Edwards, Jesy Nelson, Leigh-Anne Pinnock and Jade Thirlwall, as opposed to the bland music industry play-by-numbers girlband that many would expect from the product of a Simon Cowell TV show. 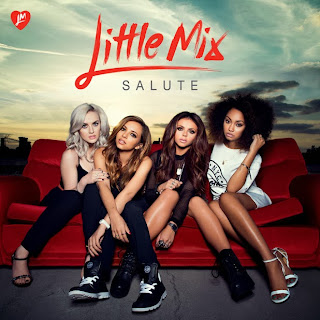 Romantic “Towers” exhibits their growing emotional maturity, a moving ballad about doomed love, a theme that I am personally feeling too strongly too much right now. “Once we were made like towers / Everything could've been ours / But you left it too late now my heart feels nothing, nothing at all” they croon forlornly, to a swelling, majestic string orchestra overlayed with RnB beats. It helps that all four of them are all talented performers, so the delivery of the lyrics sound heartfelt, when the song could have turned out mawkish in lesser vocal talents.

Being unafraid to borrow from their hip-hop sisters is another thing I really rate about Little Mix. They channel both Amerie and Lady Gaga in standout track, “About the Boy”, a feisty, sexy track about a fella who’s just got that one thing. Fabulous harmonisations, an extremely catchy beat, good blend of singing/spoken word and another topic that I have a personal experience or ten of makes for a wonderful song. And the crème de la crème comes at the jazzy refrain, where soon-to-be Mrs. Zayn Malik, Perrie Edwards gets to exhibit her fantastic pipes in her high note, which has to be heard to be believed. And then heard over and over again, because it is just that good.

Like the sass in DNA’s “How Ya Doin’”, the four girls strut their stuff proudly here too, with lyrics like “Boys will be boys, I got plenty knocking on my door / but none of them compare, you’re the one I’m waiting for” in "Nothing Feels Like You". For some reason, Little Mix have the likeability to carry off lyrics like this, whereas in lesser talents, such as Pussycat Dolls’ “Don’tcha”, they could have simply come across as arrogant.

As with most albums, there are a few duds. “These Four Walls” didn’t affect me in the same way as “Towers”, despite it going for the same thematic field, and the frailty that the producers were going for in the girls’ voices comes across as just weak vocals, which definitely undersells them. Similarly, in “Good Enough”, the girls demanding “Am I still not good enough? / Am I still not worth that much?” simply comes across as needy, and jars with the girl power vibe of the rest of the album, however well-sung.

Thankfully, the rest of the album is all about unabashedly celebrating girls and how terrific we are. “Boy” has serious Destiny’s Child-esque vibes, in both the beat, singing style and the Say My Name-type themes. Their single, “Move”, which they performed recently on X-Factor with gusto, is a hugely enjoyable dance track that is pure pop, with some cool rapping to boot. Perrie is my favourite singer of the four, and she belts out the bridge tremendously, showing an enviable opera-esque quality to her voice that complements her band members well.

In the void left by Girls Aloud, there hasn’t really been a girl band that have reached the heights of them. The Saturdays made a fair crack of it, but they lack a certain je ne sais quoi. Little Mix may have been fashioned as a cynical money-making ploy to fill that gap, but the make some damn good music. From the military-style Beyonce-esque drumming, messages of not allowing men to play us and cheap and cheerful RnB components, there is nothing in Salute that you won’t have heard before in millions of other songs, but such is Little Mix’s energy, that it all comes off into a pretty decent end product. I salute their second album.

Hello! This post could not be written any better!

Reading this post reminds me of my old room mate!
He always kept chatting about this. I will forward this page to him.

Fairly certain he will have a good read. Thank you for sharing!

No matter if some one searches for his necessary thing, thus he/she desires
to be available that in detail, therefore that thing is maintained over here.