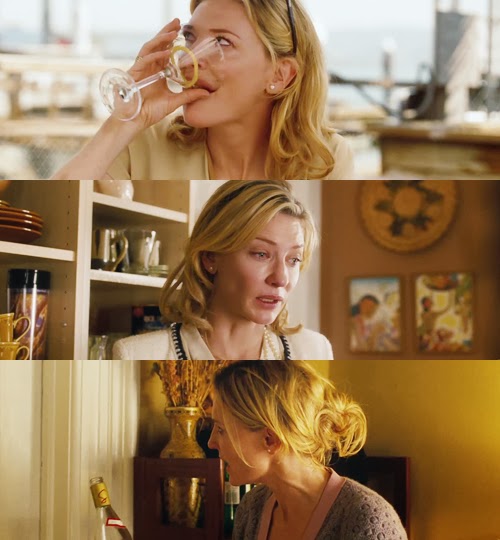 Socialite Jasmine French (Cate Blanchett) had lived the charmed life in New York, married to a canny, popular financier husband (Alec Baldwin) in a huge mansion. However, her world came crumbling down when said husband was done for being a Ponzi scheme-running crook, and sent to prison. With no life skills, work experience or educational training of her own, she is forced to re-root to San Francisco, where her adopted sister Ginger (Sally Hawkins) lives.


The fallen Park Avenue princesses’ transition from entertaining glamorous parties to hosting Ginger’s fiancée Chili (Bobby Cannavale) and his rowdy mates takes some getting used to, and further culture clashes arise when Jasmine takes up a job as a secretary for a dentist, and tries to better herself by “learning computers”.

Blue Jasmine is, on several levels, a difficult watch. Many of the scenes are painfully cringe-inducing, from the opening sequence, where Jasmine is gabbing away to a stranger on the plane about her husband and how great her life had once been, to the various times she is shown talking to herself. Make no mistake, our protagonist is troubled.

As the film flits back and forth between Jasmine’s excruciating attempts to settle into San Francisco and Gingers’ meagre surroundings and that of the opulence she was used to before everything went sour, we initially begin to feel some sympathy for her. Jasmine is spoilt, no doubt, but going from Louis Vitton to off the rack is a conversion very few would relish.

But the problem with Jasmine is that she is so goddamn superior. Channelling Blanche Dubois in A Streetcar Named Desire, Jasmine has no qualms about sneering publicly at her sister’s life, job, and choice in men, and in doing so, putting Chili’s back up. Factor in Jasmine’s predilection for delusion (both to herself and in deceiving others about her history), reliance on Valium and vodka and frail mental state, and you can see why parallels have been drawn between this film and Tennessee Williams’ seminal play.

In some ways, Woody Allen takes it even further than that. The dodgy dealings of Alec Baldwin that made him his fortune but then landed him in jail, is an all-too-familiar reminder of things that actually did go on during the financial crisis and the fallout when several families much less wealthy than him also lost it all, due to their misplaced trust. And, whilst I felt Blanche was a true tragic heroine, I felt a lot more ambivalent about Blanchett’s character here, who flitters between a compelling, frail woman to egotistical snob, and back again.

Kitted out impeccably throughout (she was forced to sell her jewellery after her assets were liquidated, she whines, but somehow manages to keep hold of a Hermes handbag and some designer dresses), she carries herself with the poise of a woman who feels, nay, KNOWS, that she’s something special. The only difference is, whilst in Manhattan, all her social circle indulged her bloated self-esteem, in San Francisco, ain’t nobody got time for that.

Chili wants Jasmine out of Ginger’s flat as soon as possible so he can get married and move in with her, and Ginger’s ex-husband and father of her two sons Augie (comedian Andrew Dice Clay, playing it straight) still harbours resentment at the way Jasmine’s husband Hal swindled them out of their one shot at escalating out of working class, no doubt what led to the downfall of his and Ginger’s marriage.

So, a lot of characters to get through in less than 100 minutes, but Allen tells his story confidently and economically. The film’s driving force is undoubtedly Cate Blanchett, who has rightfully already garnered Oscar buzz for the performance. I think it is her best work.

Jasmine is less likable than Blanche Dubois but equally as tragic- in the flashback sequences, we learn that not only was Hal a swindler but he was equally dishonest when it came to his marriage, having various affairs behind Jasmine’s back. Jasmine suspects, but, blinded by gorgeous gifts from her husband, chooses to look the other way. In Blanchett’s needy performance, we can tell that deep down, she knows, but is choosing to pretend it isn’t true because she would lose too much if she chose to acknowledge it.

Where actresses have often channelled Woody Allen’s own neurotic performances, played for laughs, Blanchett goes the other way, playing it straight. The result is tragi-comedy nonetheless, but of the squirming, uncomfortable kind. The way Jasmine casually tramples all over Ginger, Chili and their friends’ lifestyles of boozing, pizza and sports on the box is insulting and irritating, but Jasmine has no self-realisation, and it is to Blanchett’s great strength as an auteur that she conveys this.

We don’t so much as like her – I don’t feel Allen intended that anyway – as see where she’s coming from. And cringe, a lot. With the cinematography working overtime to highlight Blanchett's gaunt cheekbones, bags under her eyes and smudged mascara, we don't so much root for Jasmine as live Jasmine.

One of the biggest criticisms angled at Blue Jasmine is that it’s unabashedly classist, and, in this, I am inclined to agree. When Jasmine talks down to Ginger about Chili and her ex-husband Augie being “losers”, you don’t so much feel it is Jasmine saying these words as Woody Allen himself, who has clearly never spent any time with working class people in his life, and thus has a caricature built up in his mind of them as simple, beer-loving, ripping-phone-out-of-wall-when-vexed, people.

This jars with his representation of the poncy Park Avenue folk Jasmine previously took company with, who, whilst painted lightly satirically as gossiping schemers, does not delve anywhere near as deep as he could if he really wanted to go to town on them and their habits. In short, Manhattan and wealth, in Allen’s eyes = good, good, good. San Francisco and living paycheck to paycheck = bad, bad, bad. Simplistic, to say the least.

Fortunately, the goodness of Jasmine’s poorer acquaintances shines through, regardless of their poor wardrobe choices (Ginger is dressed in unstylish prints and brash colours, quite at odds with her mousy character). British actress Sally Hawkins does a thoroughly convincing West Coast accent as Ginger, and her loyalty to Jasmine throughout is commendable, particularly given the woe her adopted sister has caused her.

Bobby Cannavale, in a slight digression of the Stanley Kowalski character, exudes warmth, and we genuinely feel for his plight, of simply wanting to make Jasmine feel like she fits in, only to be told her isn’t good enough. Alec Baldwin and Peter Sarsgaard (as a potential suitor for Jasmine, rich, naturally) reach Robin Thicke levels of smarmy, but that suits their characters well. And Andrew Dice Clay is quietly heartbreaking as Ginger’s defeated ex.

The overarching message of Blue Jasmine, it seems, is the perils of self-deception, as well as the importance of helping someone see the truth if they won’t do so themselves. In thus, I embrace the movie with open arms. Whilst the crude class depictions aren’t for everyone, and the melancholy tone and recession-set austerity doesn’t render this film escapism in any way, what it does make for is a gripping morality tale. I rank Blue Jasmine as one of Woody Allen's darkest films, but it is all the better for it. It was too little, too late for Jasmine, but it needn’t be for others. Reality checks are the way forward.

Do you like live sex cams? Then visit BongaCams.

eToro is the #1 forex broker for new and professional traders.

BlueHost is ultimately one of the best hosting provider with plans for any hosting requirements.