01. My Neighbour Totoro
An initial flop in Japan, people slowly came round to loving My Neighbour Totoro. It tells the story of two sisters, Satsuki and Mei, 11 and 5 respectively, who move to the countryside for the health of their sick mother. Their house is near a forest, and soon they’re encountering mysterious and intriguing woodland creatures. These woodland creatures are utterly adorable and so, well… cute. And even though the film is very innocent, devoid of any evil characters, Miyazaki isn’t afraid to take a walk on the dark side too, meaning that this never veers into saccharine-Disney mode. And honestly, Totoro, Neko Bus Chu Totoro and Chibi Totoro are just so. darn. cute.

02. The Road Home
If you want to see how likeable Zhang Ziyi was before she became a full-blown diva, check out this film, in which she plays (in flashbacks) a girl who waits patiently for her love by the road. My heart literally broke and I was bawling my eyes out when, in once scene, the food she was carrying for him (I think it was dumplings) rolled down a hill, and the wife too, cries. Along with Not One Less, The Road Home also captures the impoverished, hardness of Chinese life, yet does so with a nostalgic fondness. Beautiful.

03. Monster’s inc
Mainly for Boo, the type of character that I usually find annoying in a film, but in Monster’s Inc, she completely won my heart. And the final look on Sulley’s face when he opened the door… ♥


06. Wall-E
Sorry, I know I've said this about a thousand times, but - Eve was just so cute! Her giggle! And also, the whole holding hands thing. And the umbrella thing. And the scene where Wall-E and Eve were flying through space. They all left me feeling lighter than air. 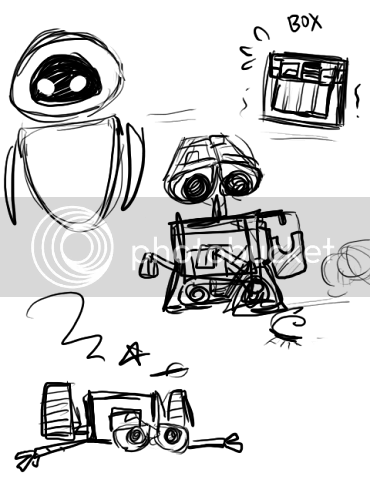 My sister is a Ghibli addict and we both agree with you there, Totoro is a beautiful movie. No big events or dramatic stuff happening, just a simple tale of love and childhood. My sister has a Totoro purse!
Monsters Inc and Wall-E are gorgeous, another triumph for Pixar. I'd say Amelie is very cute, it's a postcard perfect Paris full of green and red and romance.

Good list, I thought Monsters Inc. was a great movie.

Good list, I thought Monsters Inc. was a great movie.

That's the only one I've seen on your list...hoping to catch Wall-E when it comes out on August 31 Down Under.

Also, I believe congratulations are in order for your marks! Saw them over on Anahita's blog, but I can't say they make much sense to me, only that you did well! Did you get the marks you wanted?

Emma said...
This comment has been removed by the author.
2:39 pm

Ahem, no "Spirited Away"? I'm not a big animation fan, and probably less of an anime fan. However this film changed my brain!

My Neighbour Totoro is so cute. This is an awesome list. Good mix between animation and live action!

And your top 10 cute films should all feature my Keira

Yeah, *(one of) my photobucket accounts had reached its max bandwith limit... but it resets itself today, so all is well!

I just love the film. I saw the first video and they were amazing. I think you're right about the creatures, they were fantastic. Isn't a real supposition but most of the people, just love it!

My Neighbour Totoro is so cute. This is an awesome list. Good mix between animation and live action!