Congratulations to France on winning the World Cup! 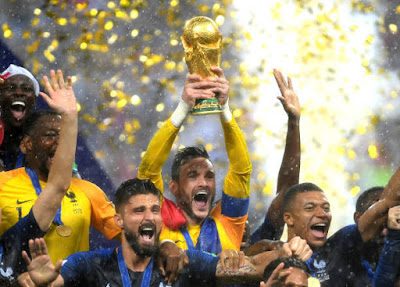 As I said before the tournament began, they were who I wanted to win, largely because they have the dishiest squad, but also because two of their starting XI, N’Golo Kanté (the happiest man ever) and Olivier Giroud, are Chelsea players, so Chelsea can claim 18.2% of the victory. 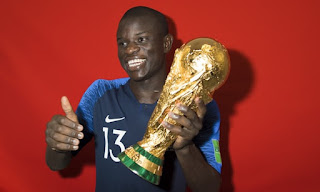 Part of me wanted France to win for vengeful Gone Girlish reasons: England football fans love to sing that intolerable ‘it’s coming home’ song, and it would put their backs up something awful seeing the trophy ‘come home’ to their Gallic neighbours, instead.

And, as I’ve mentioned, I feel English football fans don’t deserve to be rewarded, given the no small part they play in normalising racism against my people. The BBC presenter Gary Lineker making excuses for Jamie Vardy’s usage of ‘Jap’ is a shining example of how racism against east Asians in this country is considered fair game.

But yes, congratulations to France! I’m delighted that Hugo Lloris, who has been toiling endlessly to no fruition at White Hart Lane, finally gets to experience glory! 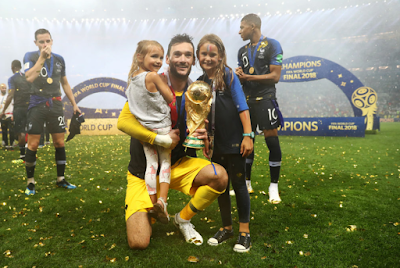 My last World Cup-related blog that I will do before reverting to my status quo of pedantic BBFC blogs and throwing shade at restaurants, is ten adorable bromantic intra-club moments from the tournament this year.

This World Cup has been absolutely immense, the Banter World Cup, if you will, featuring sensational goals (my personal favourite was Benjamin Chalamet’s one against Argentina), thrilling games, hilarious moments and memes and general WTF-ery arising from the use of VAR on margin calls. And I’ve loved every minute of it.

But my favourite thing about the World Cup, and all international football tournaments, for that matter, remains the lovely display of fraternity between footballers from the same team (but opposing countries) at the end of the game.

Remember, before the World Cup started, the thing I was most excited for was some manlove between Chelsea club-mates Gary Cahill and Eden Hazard. Did my expectation get fulfilled? Read on to see!

A disclaimer, that these are just ten bromances that involved players who I like.

Needless to say, there were a plenty more than just ten displays of intra-club fraternity throughout the World Cup, such as, for example, Sergio Ramos (the Spain and Real Madrid captain) hugging  his club-mate Cristiano Ronaldo (Portugal captain and general showboater) after Spain v Portugal in the group stages. But I don’t like either of them (the fact that I put both in my World Cup Ugly XI may be somewhat of a giveaway...), so I didn’t think it was worth chasing pictures of the moment, aha. 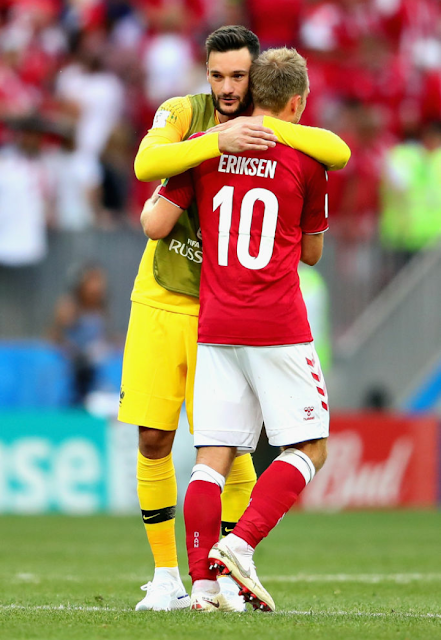 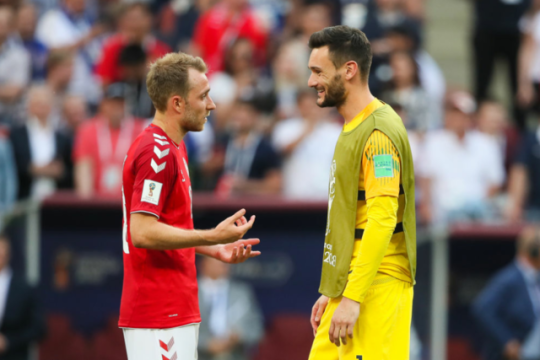 These two are like the only two Spurs players I like (no, Harry Kane's stat-padding with all those penalties for England this World Cup have not earned my affection), and they faced each other in the final group stage game, although, as France had already made it out of the group stages by this point, Mandanda was in goal and Lloris was rested (hence the bib). They still had a cute catch-up tho. 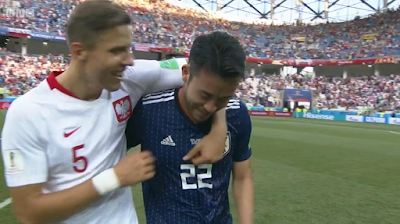 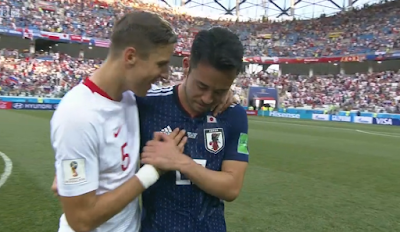 The Southampton centre-backs embracing after Poland v Japan, during which Bednarek scored the only goal of the game. Despite Poland winning that game, they went out of the group stages (their fate had already been sealed from their two prior losses), and Japan went through ahead of Senegal by virtue of having fewer yellow cards! 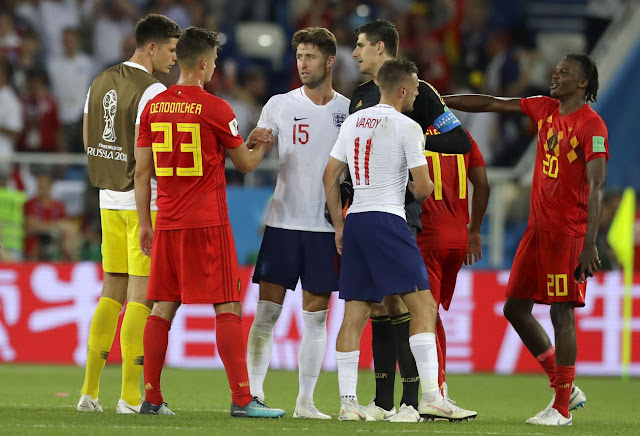 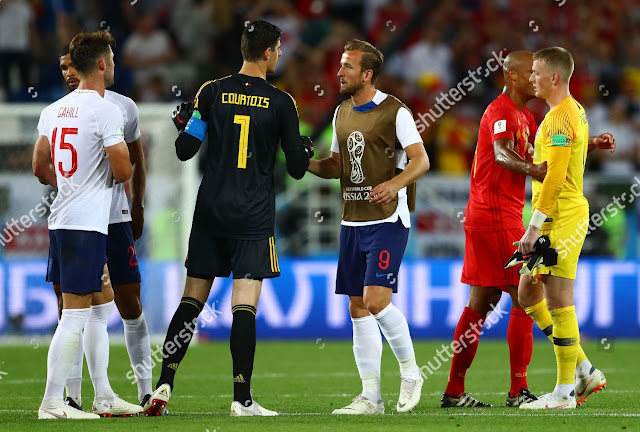 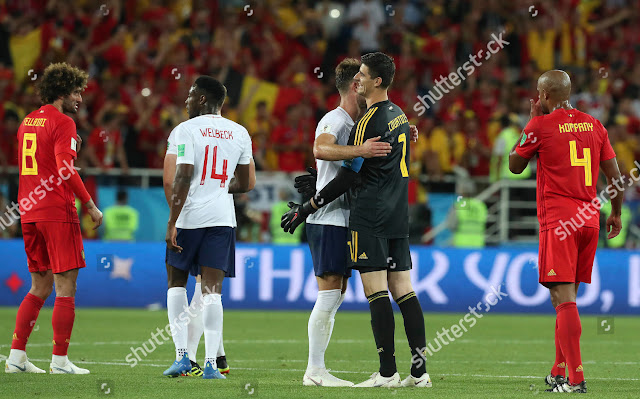 Because Gareth Southgate seems to despise Cahill (cue the La La Land covers whining about it. Still a better singer than Emma Stone), this was the only game of the tournament that he played in. 😶  I don't really like Courtois even tho he's a Chelsea player, his arrogance and penchant for shooting his mouth off is insufferable. But as GS doesn't rate Cahill, beggars can't be choosers and I have to take what scraps I can find. 😂

Cahill's tan is on fleek in the last picture, particularly when contrasted against Tibo's pastiness! 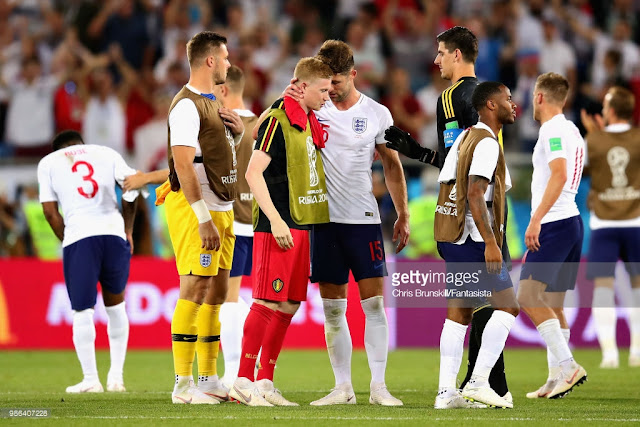 KDB obviously doesn't play for Chelsea any more, thanks to that buffoon Mourinho, but I like to think Cahill's letting Kevin know that whilst Mourinho may not have recognised that a gem he had on his hands, Gaz certainly did. ❤️ 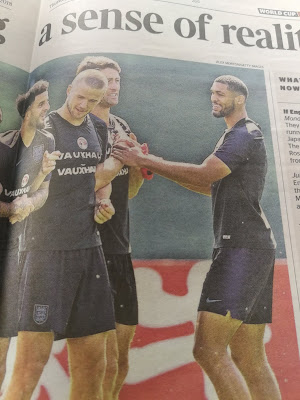 I found this friendly photo in the World Cup section of The Times, which also blessed us with those fun 'Guess the footballer' puzzlers throughout the tournament! Chelsea teammates Cahill and Loftus-Cheek sadly both didn't get to do much playing for England in the World Cup, but at least they had each other to goof off with.

I'm a fan of how closely RLC is clinging on the Cahill here. He gets it ;) 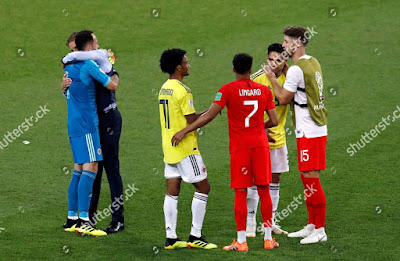 Considering Cahill didn't play in this match, I'm fairly pleased with myself that I found this rather lovely picture (even if the damn watermark is plastered all over it). Falcao had a brief, ill-fated stint at Chelsea, but such is the compassion of Gaz, that he never forgets a teammate, no matter how fleeting their time at CFC, and was there to console Falcao.

Also in the background is Gareth Southgate hugging the Colombia goalkeeper David Ospina. Whilst Southgate's tactics have been questionable this World Cup (more on that later), one cannot fault his class and the gentlemanly way he's conducted himself. He was always there to commiserate the opponent, or congratulate the opposition when England lost, and as a result, it's not just sales in M&S waistcoats that have soared up as a result of him taking charge of England. 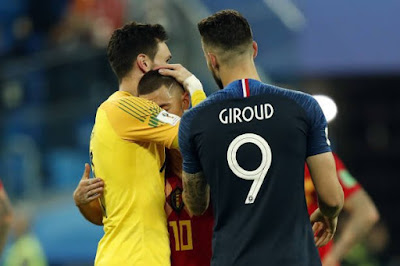 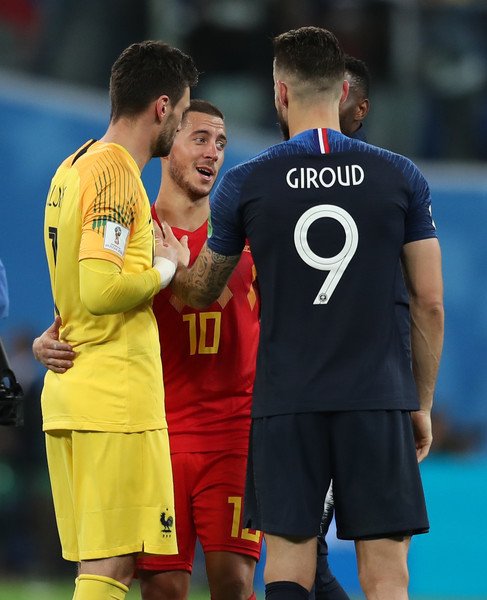 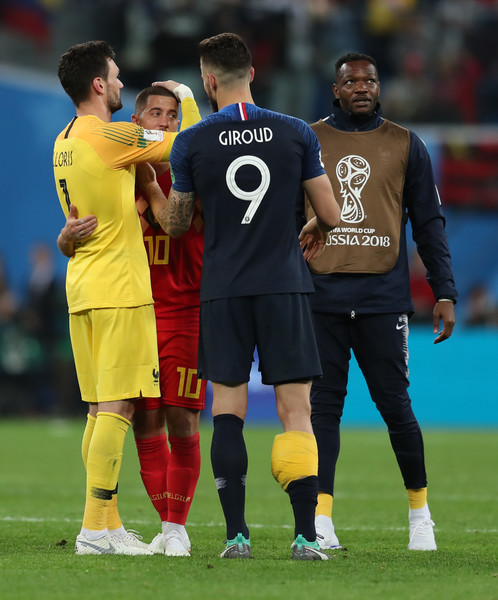 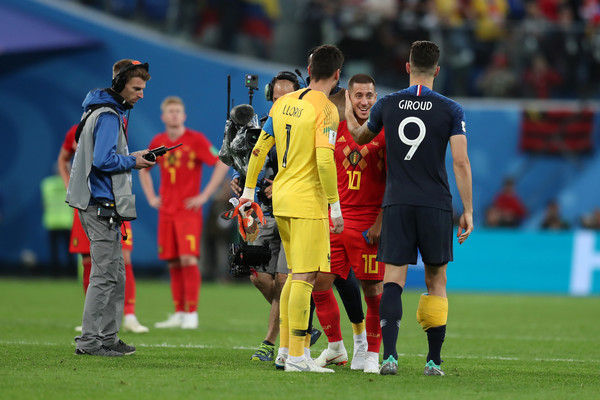 This was, far and away, my favourite display of bromancing at the World Cup! It helps that all three of the men in the shot are devastatingly handsome. But I just love how closely Lloris is hugging Hazard, and, as a consequence, Eden is smiling, despite his country just being defeated by France in the semi-finals, showing that the embrace is an efficacious one.

It's really nice that Lloris clearly isn't being petty and holding a grudge against Hazard, who has scored a fair few goals and penalties against him when Chelsea play Spurs. And the way Giroud is putting his hand on Hazard's chest is the cherry on the cake in this Francophone bromance-fest. 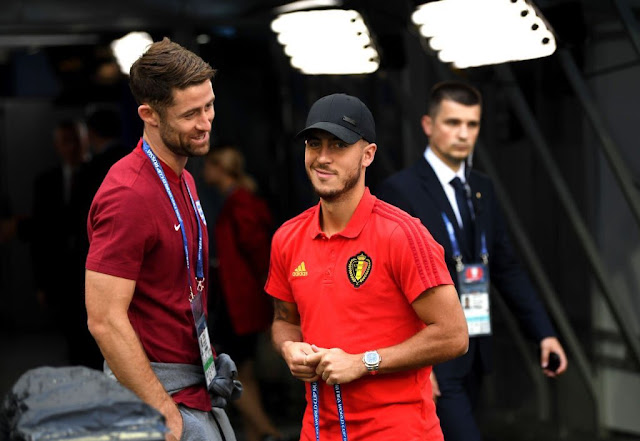 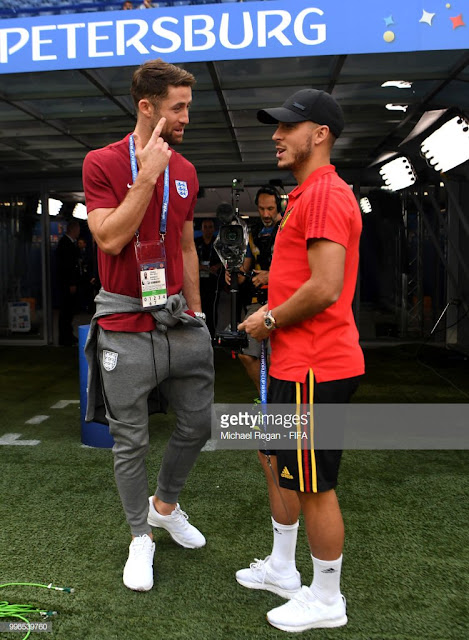 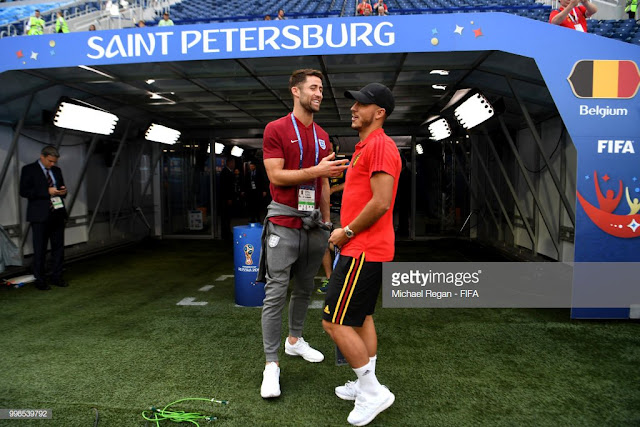 As nice a man as Gareth Southgate is, he's not the shrewdest of tacticians.

In the third place play-off against Belgium, a match which neither team really wanted to play, he started Phil Jones ahead of Gary Cahill. Anyone who saw the torrid time Hazard gave Jones in the FA Cup final (or watched any encounter between Chelsea and Manchester Utd in recent years, for that matter), would know what a rookie error that was, and indeed, Jones was destroyed by Hazard for Belgium's goal and generally played quite oafishly throughout.

Cahill should have played, and then I would have gotten some proper photos of them hugging (like Lloris hugged Hazard), instead of these rather underwhelming photos of them chatting pre-game. Also because Cahill is Hazard's teammate and can read club-mates quite well, obviously. #FOOTBALLINGREASONS 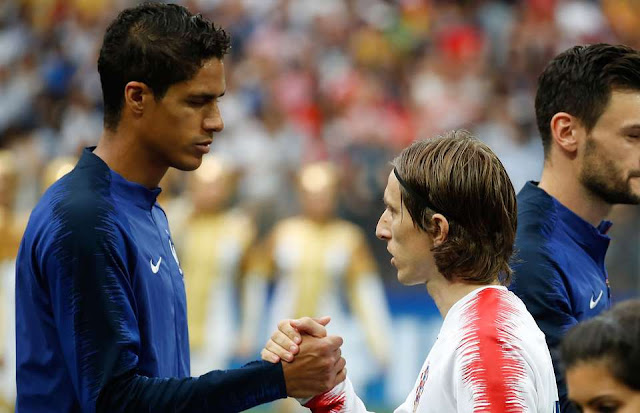 Real Madrid teammates, like Sergio Ramos and Cristiano Ronaldo, but unlike those two, I actually like these two dudes. Varane has been absolutely imperious in defence for France this tournament, and also scored the crucial goal that put them ahead against Uruguay, and Luka Modrić was just recipient of the 'Golden Ball', assigned to the best player of the tournament.

Just a few months shy of 33, he was an absolute machine for Croatia, and, much like Marion Cotillard's character in The Dark Knight Rises leaping out of the hole in the ground, he dragged Croatia to the World Cup final through force of will alone.

10. Antoine Griezmann and Uruguay in a press conference after France's final victory 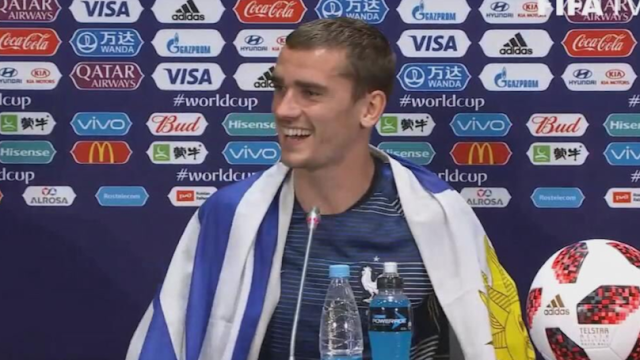 This cutie patootie has German and Portuguese ancestry (from his father and mother, respectively), but the nationality that he said he'd be if he weren't French is neither of those. Griezzy identifies as an honorary Uruguayan, in no small part due to his bond with his Atlético Madrid teammates Diego Godín and José Giménez, as well as his fondness for the mate drink.

In his press conference following France's entertaining victory, a Uruguayan journalist offered Griezzy a flag of his country, and Antoine said 'dámelo' (Spanish for 'give it to me'). He draped the flag around himself and wore it proudly for the rest of the press conference. Apparently, Griezzy even speaks Spanish with Uruguayan twang!