The Death of Specificity

This blog is rated 15 for infrequent very strong language and strong sex references.

The Death of Stalin, Armando Iannucci’s razor-sharp historical satire, explores the power struggles that unfold immediately after Joseph Stalin dies from a stroke, with hilarious consequences.


One facet of the absurdist comedy overtones in the film, was to have prominent British and American actors play the cronies gunning for the position that Stalin’s death has created. Rather than adopting Russian accents, the actors speak in their natural brogues, meaning at one point, we face a ‘Russian’ war general speaking with a thick Northern accent.

(Given the car crash that was Jennifer Lawrence trying to do a Russian accent in Red Sparrow, perhaps asking Hollywood actors not to put on Russian accents was a judicious move).

Given the fraught situation and the fact that the film is written by Iannucci, it is no surprise that the dialogue in The Death of Stalin is f-word heavy. There are also the odd scenes of violence, depicting the unforgiving nature of Stalin’s regime on political dissidents. The film is rated 15 for ‘very strong language, brief strong violence’ by the BBFC.

For this film, however, I think both the IFCO and the MPAA’s insights are more reflective of all the content in the film.

The Death of Stalin is a 15A in Ireland, and here’s its information box: 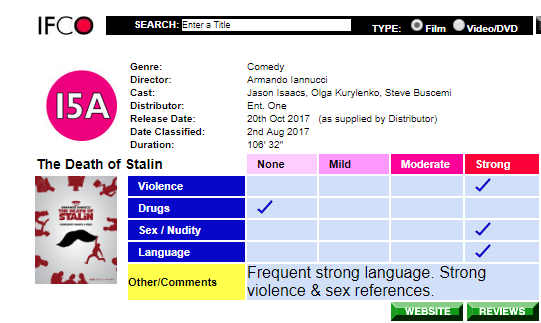 In America, it’s rated R for language throughout, violence and some sexual references.

(The Death of Stalin is the equivalent of a U in both France and Japan – my World Cup teams. Which is part of the reason why I restrict my film classification analysis to just England and Ireland, and very occasionally and only to reinforce points, America. It would be impossible to calibrate film ratings across countries, because societal norms vary massively from country to country!)

What both the IFCO and MPAA have flagged which the BBFC have not, is the frequency of the swearing, and the sex references.

Part of this is because the BBFC focused on the strongest term in The Death of Stalin – the c-word. Its utterance only occurred once, and as far as usages of the c-word go, it was pretty tame. Stalin’s spoilt alcoholic son Vasily says it about himself, about how he ought to conduct himself when meeting people he despises at his father’s funeral: 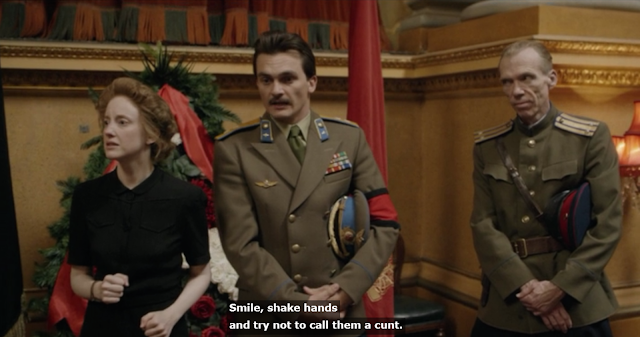 Because the BBFC flagged the c-word, it kind of made any mention of strong language redundant. I’ve noticed, beyond 12A, they no longer remark on the frequency of strong language. 8 f-words gets the same short insight at 100, both would fall under the umbrella of ‘strong language’.

I think this is the BBFC’s folly. Even though both would be 15-worthy, what’s the point in having the short insight if you’re not going to alert people to the full extent of the swearing? The number of usages of ‘f_ck’ in The Death of Stalin outstrips that in Phantom Thread by at least tenfold, but you wouldn’t be able to tell from the short insights.

The Irish shrewdly mentioned the ‘frequent strong language’, which delineates it from Phantom Thread, which only had about six or seven usages, but was also a 15A: 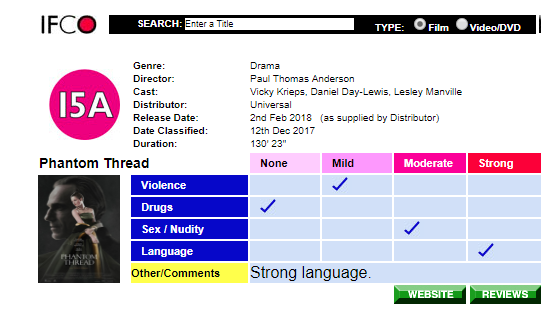 The MPAA also covered this, mentioning the ‘language throughout’.

The second thing on which the BBFC have been rather lax, is not mentioning the sex references. Here are some examples of the bawdy banter between the grasping politicians in The Death of Stalin: 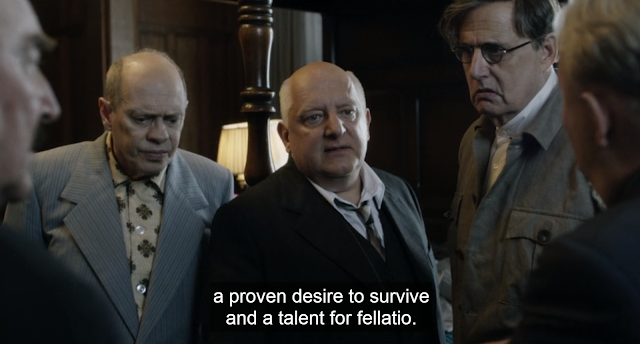 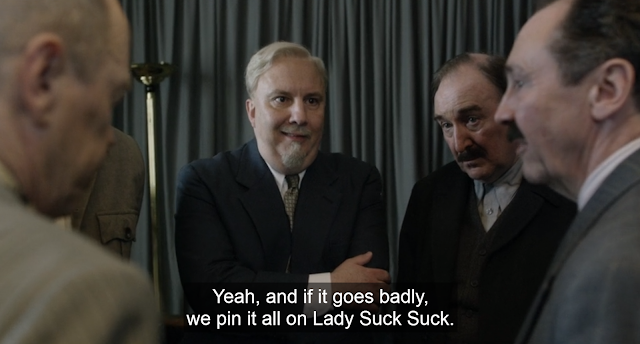 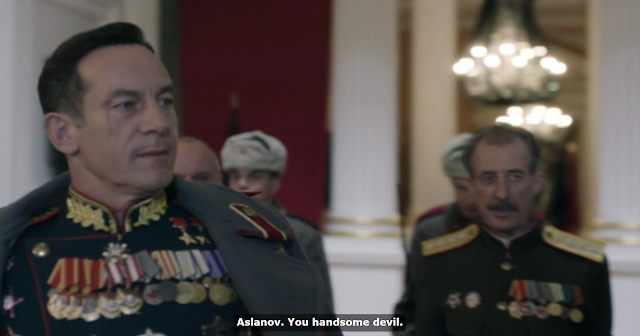 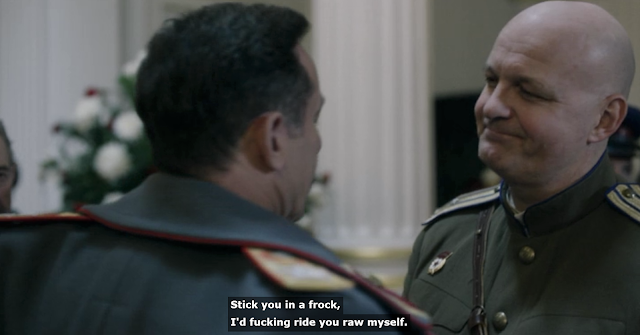 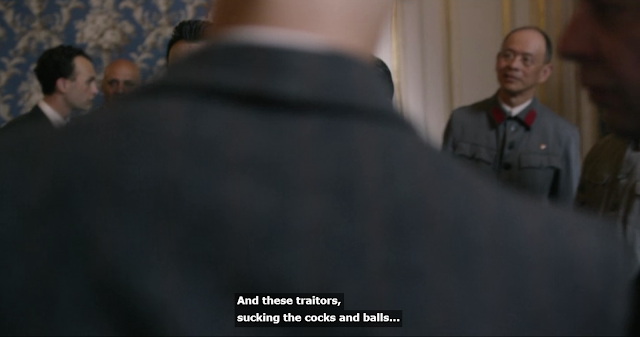 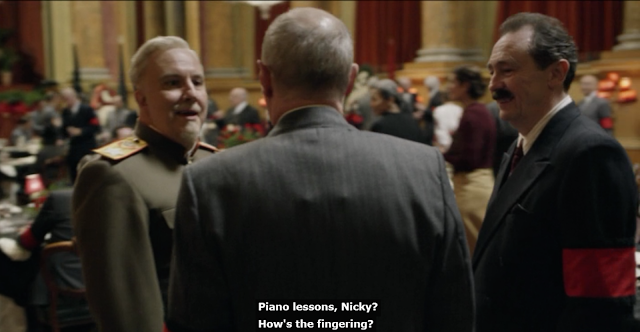 None of these lines would be passed at 12A, and that means, they are, even being generous, 15-rated moderate sex references.

Some sex references, though ‘moderate’, are on the stronger side of moderate, without being so strong as to be termed strong. It’s a very subtle difference – but see Easy A, Date Night and The Big Sick for examples of 15 rated ‘moderate sex references’ as opposed to 12A-rated ones).

But I wouldn’t even call the conversations screen-capped above, moderate. The crude references to oral sex are part of an on-running joke that Beriya forces women to perform sex acts on him, or else he’ll have them or their husbands killed. A bit dark in tone to be considered moderate for me, and then the flippant way one of his accomplices refers to one of these women as ‘Lady Suck Suck’, showing that the men couldn't care less about women being forced to give BJs under duress, just makes the joke darker.

I would agree with the IFCO, who have labelled the sex references in The Death of Stalin strong, which they are.

I’m perplexed as to why the BBFC haven’t flagged it. I know their short insight is constrained by 75 characters, but ‘very strong language, brief strong violence, strong sex references’ only takes up 66 characters, so that excuse doesn’t fly.

I personally think that, if a film’s rating is already established for say, two reasons, the BBFC examiners get lazy when it comes to all the ‘extra stuff’ and don’t focus as intently on it. Which is totally their bad. Atomic Blonde was their third most complained about film according to the 2017 Annual Report, and a good chunk of the complaints were over a sex scene.

This South African queen's still got it!

(The sex scene was femme/femme, so the BBFC are always going to have to deal with the odd knuckle-draggers - as the guy from Orpington whining about the Love, Simon trailer, proves).

But I suspect that part of the reason the more reasonable people complained, was that what was in the film, ie, a sex scene, confounded their expectations of what was going to be in the film, going by the BBFC short insight, which is shown before a movie starts.

Once again, the IFCO were not coy about the content in Atomic Blonde: 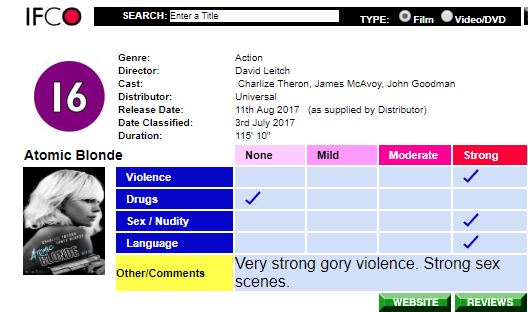 Another example where the BBFC failed to flag the sexual content in their insight was the first Kingsman film, which got 38 complaints on its release in 2015, a good thirty more than its sequel.

The funny thing about Kingsman is that the BBFC extended insight even admits the film has strong sex references. So why not mention it? A fair proportion of those 38 complaints came about the crude joke that the film closed on.

(Isn't it funny how Kingsman, Death of Stalin and Atomic Blonde all have very similar three category-defining issues, yet the BBFC ignored the sex in all three?!)

The BBFC need to pull their finger out, because as The Death of Stalin, Kingsman - The Secret Service and Atomic Blonde show, it almost seems like they’re actively withholding information from British cinemagoers!

And withholding information is the sort of thing the weasels in The Death of Stalin would do.

It's perfect time to make some plans for the future and it is time to be happy.

I've read this post and if I could I want to suggest you few
interesting things or advice. Perhaps you can write next articles referring to this article.
I want to read more things about it!

Heya i'm for the first time here. I came across this board and I
in finding It really helpful & it helped me out a lot. I'm hoping
to provide something again and aid others like you helped
me.