Despite meeting Per Mertesacker at Sushisamba, I’ve never actually dined there, and thus the mantle of fanciest sushi restaurant I’ve been to is Sticks’n’Sushi at Henrietta Street, London.

We had the ‘Gala’, which, at £75, wasn’t cheap. The option included Beef Tataki, Edamame, Hotate Kataifi, Nigiri, Chicken with chili & teriyaki, lamb chop with miso herb butter and duck breast with panko & wasabi Caesar, so there was plenty to fill two people’s boots! 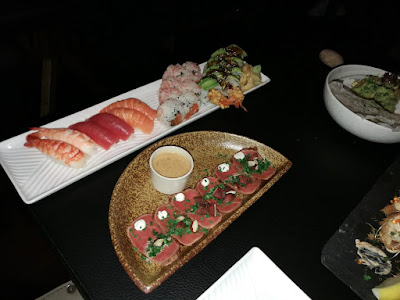 The Hotate Kataifi (‘hairy scallops’) were brilliant, bursting with flavour, and the sauce used to marinate it was a dream come true. The ingredient used to coat the scallops gave the ensemble more texture, and led the eater to believe they were having more scallops than they really were, which is a useful trick when you’re trying to lose weight! 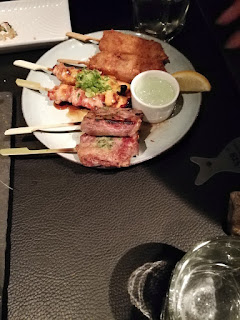 The beef tataki consisted of beef, smoked cheese, chives, almonds, yuzu-kosho & spicy goma. I liked all of these ingredients bar the almonds, which jarred with the rest of the components. Sadly, I felt the beef had been a little slapdashedly prepared, and, whilst I recognise the thin-ness of the slice is part of its ‘look’ (when it comes to fine dining, a signalling tactics restaurants often use is to give you as little of the food as possible, so that there’s no ambiguity about how much it cost), these portions were scant, bordering on non-existent.

If you’re a novice when it comes to ordering sushi, then the Gala package seems attractive, as it saves you having to make difficult calls. You’ll get several dishes at once, and the interplay between all these flavours and textures, is absolutely scrumptious. As the photos above show, the food is also presented very nicely. 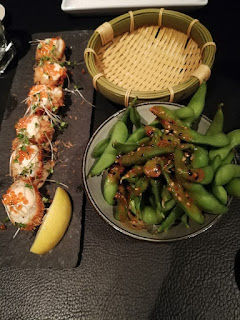 For £75, however, Sticks’n’Sushi doesn’t quite live up to its price tag. That may not be the place’s fault – very few expensive places have delivered (La Trompette and Yauatcha are two of the few places that I actually think deliver on their lofty prices). But, in my opinion, several components of the Gala were for decorative, rather than tasting purposes; the edamame were just glorified soybeans with little invention or attempt to re-package into something tastier.

When I know that Eat Tokyo and Hi Sushi are just a few streets away, I couldn’t justify spending £40+ (after paying the tip) per head for dinner when you can get more delicious sushi, for about half the price.

For the rest of my restaurant reviews, click here!

If you would like me to review your restaurant, or I have already reviewed it and you would like to discuss what I have written, drop me an e-mail at lemon_and_lime7@hotmail.com.
Posted by Emma at 10/24/2017 12:50:00 pm