Pre-La Trompette, the closest I’ve come to dining at a restaurant with a Michelin star was at Chapter One in Orpington. Chapter One used to have a Michelin star, until it was stripped of it (bit of a kick in the teeth). So I was both excited and curious about my foray into experiencing how the other 1% do live!

Unsurprisingly, given the level of prestige surrounding La Trompette, the service is second to none. The moment our water jug was anywhere below a third full, it would be topped up, and the waiters were always offering us more bread (it was too delicious to turn down!). The bread, fresh from the oven, was complemented with deliciously salted butter.

Everything about the venue was pristine, which meant it fitted in well in the salubrious part of Chiswick.

In part because the bar is so low for me, because I’m used to the attentiveness-levels of central London waiters that can most politely be described as ‘laconic’, and in part because I’m too self-conscious, but the elevated customer service in La Trompette made me a tad uncomfortable. But I don’t begrudge the waiters and waitresses that; they were doing their jobs exactly as they should have. This one’s on me.

The food was far more ornately made and lovingly crafted than Theo Randall, another restaurant of comparable price to La Trompette. For my main, I had the loin of Cornish cod, gnocchetti, chanterelles, cavolo nero and hazelnut pesto. 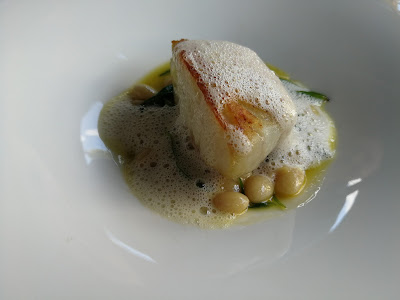 Bathing the cod in foam was an inspired touch; it meant the seafood felt more textured, despite not actually having much fat on it. My only gripe was that the portion was too small, but people who can afford to dine at places like La Trompette on the regular will understand that it’s the quality of the cuisine, not the quantity. And the quality of the fish was spectacular; succulent, and brimming with flavour. The fact that there was so little of it made me cherish the meal more!

Despite it not being cheap, I can definitely understand the ‘You get what you pay for’ adage about La Trompette, which I most certainly did not feel about Ladurée and Theo Randall, two other expensive London restaurants which charged handsome prices for ugly food. If you feel like treating yourself, you could do much worse than this Michelin starred venue.

I think this is among the most vital info for me. And i am glad reading your
article. But wanna remark on few general things, The website style
is ideal, the articles is really great : D. Good job, cheers