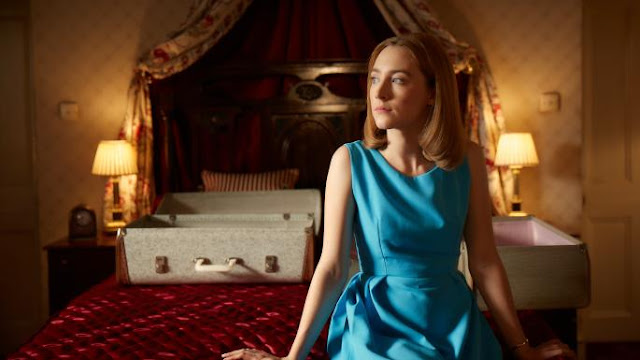 Summer 1962. In a Dorset hotel, overlooking the seaside, two virgins, Edward and Florence, navigate their wedding night with shared trepidation, although the root of their anxiety are worlds apart. He, a History graduate from a humble but loving home, can’t wait to get his hands on his beautiful bride. She, a talented violinist from a richer family, is filled with revulsion at the thought of sexual contact with anyone.

Flashbacks to how they met and the development of their relationship intimate that they love each other deeply, with shared appreciation for each other’s contrasting backgrounds. But this divergence to attitude towards sex, slowly hinted at and then revealed over the course of the film’s 110 minute running time, will make or break them.

The minutiae of the agonising preamble to the marital union, featuring an extravagant but poorly cooked meal that the two newlyweds must eat under the prying eyes of two clumsy porters, makes for amusement. Indeed, On Chesil Beach, an assured directorial debut of Dominic Cooke, contains generous amounts of good-natured ribbing at British customs, which effectively diffuse the tension of the will they/won’t they of the consummation.

Saoirse Ronan, who I first discovered ten years ago in the adaptation of Ian McEwan’s Atonement and who's work I have avidly followed ever since, gives another excellent performance to add to the catalogue of impressive turns, at just 23.

She deftly thumbnails a woman who, because of her strong familial pedigree and prodigious skills at the violin, is not afraid to voice her opinion around her peers, where she is matter-of-fact to the point of asperity. Yet she softens around Edward, all girlish and sweet, and when she regards him with those piercing blue eyes of her’s, I was reminded of the same smitten look Emory Cohen gave her in 2015’s Brooklyn.

Billy Howle, of Dunkirk fame, is her equal. Like his betrothed, Edward also has a first class degree (in History rather than Music), and has boundless knowledge on all sorts of weird and wonderful things, from birds to peripheral historical figures. He educates Florence about these things, and it’s a testament to Howle’s sensitive, loving performance that you sense he adores imparting information, rather than pontificating.

Just like Ronan, Howle has a good handle on how his character is far more than just one thing; although an intellectual, Edward’s impetuous nature gets him into fights. Ronan and Howle navigate their shifting character traits astutely, and I’m excited to see them work together again in the adaptation of Chekov’s The Seagull. 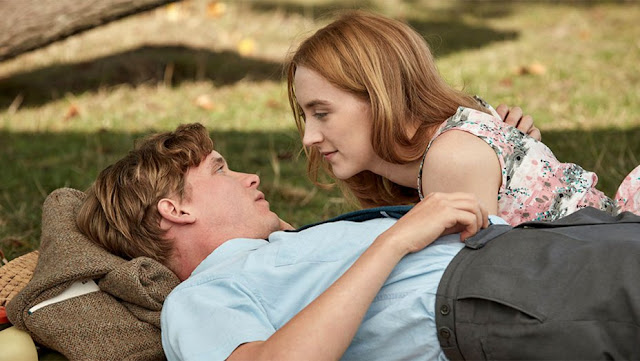 There are a few flaws in On Chesil Beach. In the novella, the treatment of Florence being abused as a child as a potential explanation for her aversion to physical contact is obliquely insinuated, with a few strategically vague prose in the book, left to the reader’s interpretation. Ian McEwan explained that he wished for the audience to devise their own take on this, without being too deterministic.

In a film, it’s much more difficult to capture the nuance of a book, in that scenes are either in the film, or they aren’t. Thus, the depiction of child abuse in the movie is unfortunately a little clunky and heavy-handed. If they were going to explore the abuse route, I feel the film should have dedicated some screentime to it, rather than just shoving a few brief scenes in, like an afterthought.

Furthermore, the prosthetics/make-up to age the two leads in the film’s ending can be described, most politely, as sophomoric.

However, this coda is an aspect which McEwan has deviated slightly from the novel, to the film’s benefit. The novel almost wallowed in the feeling of love lost, whereas the film takes a more conciliatory tone. Some viewers have deemed this ending unnecessary, but I welcome it; it seemed apropos that McEwan added a spoonful of sugar to his usual brand of lachrymose.

Like 45 Years and Gerald’s Game, two other examinations of marriage that are set mostly in one location, On Chesil Beach’s high-concept plot renders it stifling to the point of claustrophobic. As with Gerald’s Game (which would make a very interesting companion piece to this film), the flashbacks occur at climactic moments (no pun intended), which jolts the viewer from the anticipation at the present into backstory, which is laden with tender moments.

Essentially, On Chesil Beach postulates just how much physical intimacy matters, when the emotional and intellectual connection between two characters is so strong. It shines a microscope on a different time in Britain, when couples didn’t talk about carnal instincts until it was probably too late.

Florence and Edward’s missteps are at times, painful to watch, not least because the characters feel so authentic, the heartbreak so raw.