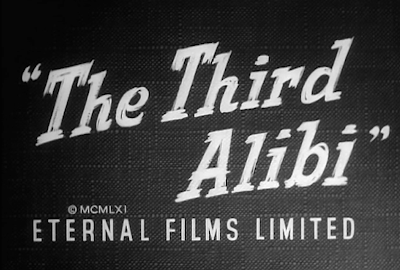 Composer Norman Martell (Laurence Payne) is the very definition of would pass in 2017 parlance as 'fuckboy'. Married to a devoted wife Helen (Patricia Dainton), he nonetheless carries on with her sister Peggy, which leads her to getting knocked up.

Out of betrayal and spite, his wife refuses to grant him the divorce he needs and being the nefarious individual that he is, Norma devises a plan to dispose of her, with the help of his mistress and a piece of recording equipment so that he has a watertight alibi. 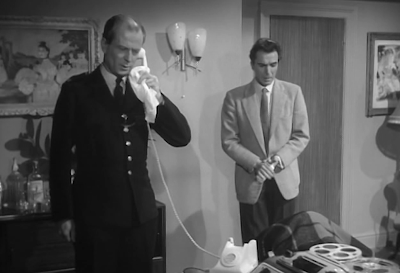 Adapted from the play 'Moment of Blindness' by Pip and Jane Baker keep the audience gripped with a propulsive storyline, and with an economic 68 minute running time, the volume of twists and turns means viewers are never bored. 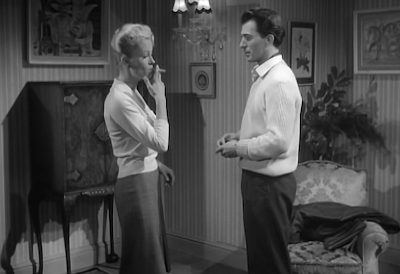 The Third Alibi boasts the unusual distinction of being the highest mark I’ve ever awarded a film, containing the worst acting (the converse – films I rated low scores, but contained stellar performance(s), are easier to come by, Precious and The Girl on the Train being the two that immediately spring to mind).

Some of the acting turns in The Third Alibi are overly-theatrical or ripe (a melodramatic fainting scene had me chortling), others, especially the long-faced villainous lead, are distractingly wooden. Even when Norman is plotting to murder his wife, he sounds as excited as he would be ordering coffee. But all the performances are uniformly bad.

Yet, despite these shortcomings, I was utterly engrossed. The plot is involvingly tricksy without being over-convoluted, as Norman’s dastard plans starts to go wrong, with the cunning ploy he had devised actually working against him. The surprises are all well-timed, some, genuinely stupefying.

The film deals a delicious slice of karma in the final act, and, whilst, for constraints of budget and what was allowed to be shown in the 60s, it doesn’t quite reach the stylistic or violent highs of Gone Girl, the (admittedly morally dubious) message that errant husbands must be taught a lesson has rarely felt so satisfying to watch.

Finally, The Girl On The Train Audio Book is available as an AUDIOBOOK.