During Friday nights around Bank, it is extremely difficult to find pubs or bars where one can sit down and have a proper conversation. Not altogether surprising, given that it represents the busiest day of the week in one of the most bustling parts of the capital. But still, I like to unwind after a long week without having to strain my voice to talk, and I was certain there must be some options. 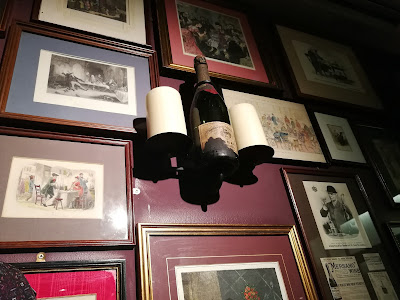 The Jamaica Wine House is a solid antidote to this. By virtue of being down a side street, this British pub doesn't stand out as much as, say, The Folly does (a venue which I wouldn't recommend anyone attend any day of the week), so less people know about The Jamaica Wine House, and it is thus more secluded.

Historical, dimly lit, and playing some musical choices that surprised me ('Another Day of Sun' from La La Land featured, which, despite LLL winning six undeserved Oscars, this is the first time I've heard a London pub play their soundtrack), this was a bar which clearly didn't feel the pressure to try to ape the style of its more commercial neighbours, but instead, embrace its own identity. I'm all for this.

The one area where it was consistent with other boozers in the City were the eye-wateringly steep prices: £5.60 for a single gin and tonic was bad enough, but even if you were trying to watch the pursestrings and go for a non-alcoholic option, a Diet Pepsi was £2.55. That's restaurant-levels of extortion, and made me postulate exactly where all the money was going, seeing as the toilets weren't exactly in the most salubrious condition.

But if you want to take shelter from the clangingly loud decibel levels of the other pubs in this area, have a gander into the more sophisticated, yet unpretentious Jamaica Wine House. It definitely has character.

Professional trading signals delivered to your mobile phone every day.

Follow our signals right now & profit up to 270% per day.

Which is better Coke or Pepsi?
ANSWER THE POLL and you could receive a prepaid VISA gift card!