I refuse to watch Hacksaw Ridge because it looks like an absolute chore (and I despise Mel Gibson), so here be my rankings, from least favourite to favourite, of the 8 films nominated for Best Picture that I have seen. I’ll list the three most Bye Felicia ones today, and give the better five later this week.

08. Manchester by the Sea 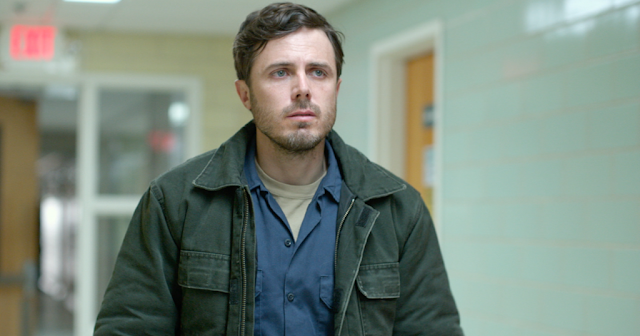 Kenneth Lonergan’s bleak-fest has Casey Affleck in a domain he’s completely unfamiliar with: Boston. He plays a reclusive handyman, Lee Chandler, who is made legal guardian of his nephew Patrick after Patrick’s father dies, forcing him to revisit painful memories in his Massachusetts hometown of Manchester.

The film slowly reveals why his character shuts himself off to human contact in a series of flashbacks and the tragic circumstances that led to him becoming this shell of a man. Affleck has received accolade upon accolade for his performance, some of the plaudits of which are utterly hyperbolic (in his BAFTA acceptance speech, Lonergan described it as ‘one of the best performances I’ve ever seen’. Calm down Felicia) but I found his acting distractingly impassive rather than ‘internal’ as all the reviews are describing him as. The scene where his house is burning down and he just stands there woodenly epitomised this.

A bland leading man, a far too languid running time that was bloated up with shots of Affleck driving and ugly Massachusetts landscapes and a surly companion in Lucas Hedges, all contribute to a dislikeable film that wallowed in its sense of misery far too much. Only Michelle Williams, in fleetingly short appearances, offers any glimpse of the film's heart as Lee’s heartbroken ex-wife Randi. 4.5/10. 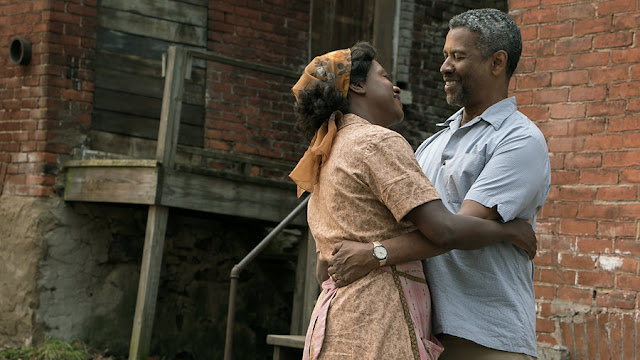 Denzel Washington is a fantastic actor, as is Viola Davis, and they make a convincing on-screen couple, complete with earthy innuendos about their sex life together. But even their acting fireworks, she, utterly volcanic as the underappreciated wife of the self-centred chatterbox Troy who's finally decided she's had enough of his B/S, couldn’t make August Wilson’s adaptation of his own play into a satisfying cinematic event.

With a generous 2 hour 20 minute running time that really dragged in the final act, Fences suffered from a critical need for more editing. It also seemed like it lacked a direction; where was Troy going with his mundane soliloquies? What was the moral of the film and the 140 minutes of boredom I'd just subjected myself to?

A Best Picture nomination and lukewarm reviews over here suggests that this film resonated more with American audiences than British ones, because honestly, scenes where Troy told the same anecdote the fifth time in a row, wore my patience very thin.

As I said, Denzel is a fantastic actor, but the jury’s still out on his directing skills. 6/10. 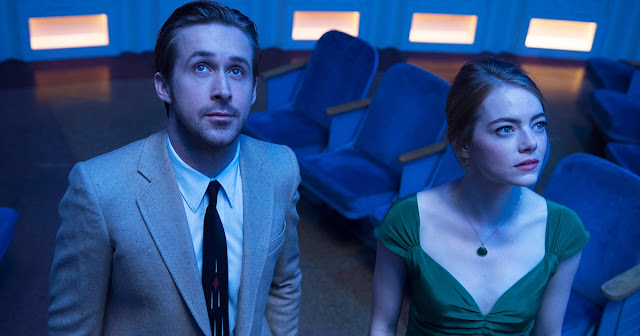 Whilst I definitely don't hate this film, even its most ardent fan could cogently argue it isn't over-rewarded with 14 Oscar nominations (those nominations for Costume, Production Design, Sound, Sound Editing and in particular, its wishy-washy, contrivance-laden Screenplay instantly come to mind).

I’m struggling to see the much-hailed ‘chemistry’ between Ryan Gosling, as jazz pianist Sebastian, and Emma Stone, as struggling actress Mia. For comparison, in Café Society, another 2016 romance set in Hollywood, Jesse Eisenberg mustered better chemistry with Kristen Stewart and Blake Lively, even though the film made the point that he only truly loved one of them.

I didn’t care for Ryan Gosling’s douchey character and the way he talked down to Mia, particularly the sequence where he takes her to a jazz bar and reels off a pretentious monologue about why he loves jazz, ironically, drowning out the sound of the musicians with his prattle.

Then there’s the flimsy songs (put it this way 'City of Stars' ain't no 'Let it Go') and the dancing, utterly stale (check out Jean Dujardin and Bérénice Bejo in The Artist, now that’s proper dancing). In the musical stakes, LLL really made me pine for the razzle-dazzle of Chicago, a winner of Best Picture at the Oscars that actually deserved to win; a musical that earned its stripes in production value and big show-stopping numbers.

However, in Mia, Emma Stone is gifted a peach of role, one that seems tailor-made for her Bambi-eyed acting talents, in which she gets to traverse the entire gamut of human emotion: excitement, sadness, vulnerability, joy. Offering her the part when her inferior namesake, Emma Watson, the first choice for Mia, was too demanding, was one of the wisest decisions director Damien Chazelle ever made. 6.5/10.

There'll be more graphs (lucky you) in the second part of this rundown, but for now, I plotted the running times of the 8 BP nominees against my mark out of 10 for them: 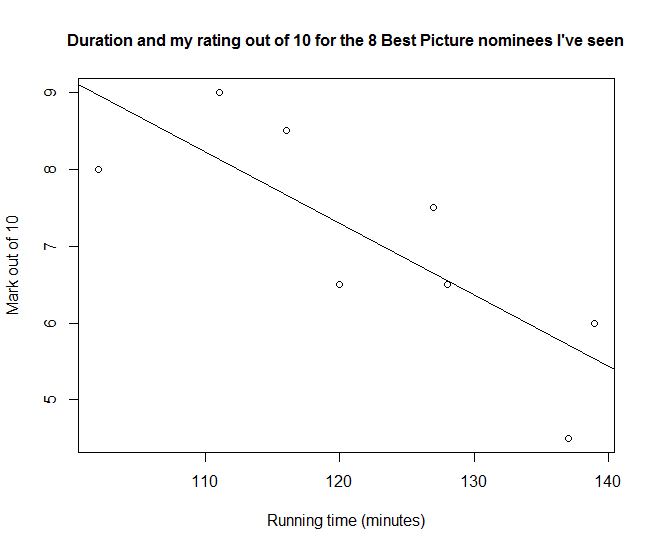