Pious BAFTA grandstanding is exactly why I won't be watching the Oscars this year.

I didn't do too well in my BAFTA predictions, although at least I beat my performance last year, where I barely got anything right (as it was on Valentines Day last year, I took it as a sign that Carol would win the categories it deserved to win. That delusion). 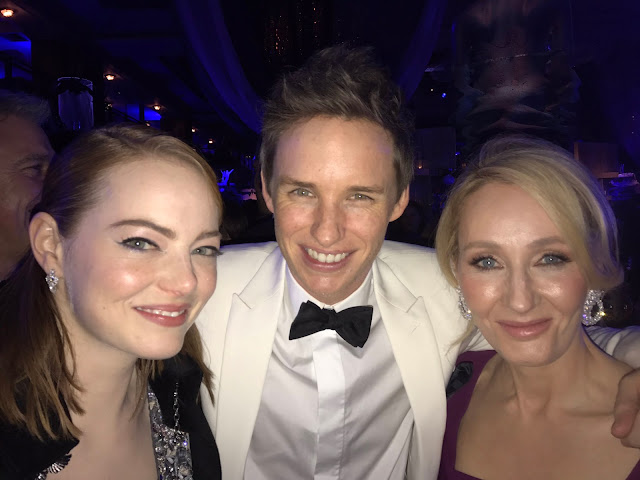 Fantastic Virtue-Signallers and Where to Find Them. I heard JK Rowling is retrospectively writing yet another Harry Potter spin-off, about Professor McGonagall's uncharted secret past, where she had a Chinese girlfriend. Emma Stone is favourite to get the role of said Chinese girlfriend.

Whilst I got the Big Four right (Film/Director/Actor/Actress), I slipped up on the supporting categories (I thought one of Viola or Mahershala would miss out, but guessed wrong on who!). My proudest achievement, however, was correctly guessing that Jackie would win Costume (those Chanel skirt-suits! *fangirls*) and Fantastic Oscar-Beggers and where to Find Them would win Production Design.

As I mentioned, I was watching in my home gym, all set to do the weights to drown out the speeches every time someone from La La Land won as part of their sweep. As it turned out, La La Land's wins were the least of my concern. It won 5; I don't think it deserved them all, but at least it didn't win for something completely ludicrous like Costume or Original Screenplay. So, considering it could have won 10 out of the 11 (Casey Affleck was locked), I don't consider the damage too bad, and hope the Oscars are equally as measured when it comes to rewarding La La Land in the appropriate categories in two weeks' time.

No, LLL doing well wasn't an iota as irksome as the vast majority of the self-indulgent acceptance speeches, where every winner (bar Tom Holland and Viola Davis) used their platform to mouth off in a portentous, no1curr manner about the current political climate.

Presenter Stephen Fry set the tone, where he was barely able to praise one film without alluding to something or other to do with current affairs. His political barbs, clearly engineered in a thirsty attempt to curry favour with the Americans, failed to amuse, both the domestic jokes, and the transatlantic ones. Hollywood actors don't know or care about the machinations of Brexit, so the Article 50 innuendos would have gone over their heads, and Fry's Trump material had been covered many a time in the Golden Globes and shows like SNL, so he just sounded like he was parroting Jimmy Fallon.

When I, Daniel Blake, a very fine film, and a deserving winner for Best British Film won, the floodgates opened for the winners to exhibit their virtue-signalling skills. I spent most of this film in tears and singled it out as one of the best films I watched last year, so I was definitely sympathetic to the film's cause. Ken Loach's acceptance speech, however, was unbelievably confrontational, almost obnoxiously so, to a point where I was left almost wishing someone else had won.

The crux of his lecture, about the Dubs Amendment, was completely unrelated to the topic of his film, which was about the difficulty of obtaining JSA. The way he ranted at the British government for not taking enough Syrian refugees reminded me of Benedict Cumberbatch that time, after giving a performance of Hamlet, he went on an anti-government tirade. Both examples were ill-fitting of the occasion, mealy-mouthed and completely tone deaf.

Do Cumberbatch, Loach and preachers of their ilk not realise that the common man also shares their grievances, and feels just as bad about it? Only difference is the common man doesn't have millions of quid, so that they lack the means to actually house said refugees, something Cumberbatch could easily afford to do if he cared as much as he was claiming to care. After all, pompously barking at a defenseless audience about child refugees isn't going to help said children. Taking a few of them in, now, that would help them.

The BAFTA award for 'Outstanding Contribution to British cinema' went to the Curzon cinema chain. I never get the point of televising this award, as the techie categories that I'm far more interested in like music and cinematography, don't get shown in favour of some corporate fatcat who loves the sound of his voice too much.

The Curzon guy who accepted the award declared 'I'll keep this brief', and ensued to deliver an oratory that was anything but. His speech was heavily inflected with resentment at Brexit, stressing the importance of integration with European peers in the film industry. This is a notion I am definitely in favour of, but it seemed a bit rich that a man from a chain who has the audacity to charge £13+ a ticket for audiences to view independent French films is claiming to care so much about European integration.

I'll be here all day if I griped about every thespian that vented their spleen about topics that were not suitable for an awards ceremony, but another that stood out was Kenneth Lonergan, recipient of the Original Screenplay award for Manchester by the Sea. He opened his speech telling us 'my daughter woke me up the morning of the US elections, in tears that Trump won'. Cool story bro. Your aversion to Trump's sexist antics would be a lot more credible if your film's star wasn't a sexpest himself, mate.

Emma Stone, who clearly had been inspired by Meryl Streep's speech at the Golden Globes and the rapturous reception it received, tried to emulate her, but her virtue-signalling came across as nothing more than what it really was: an afterthought. When her posturing did not receive the cheers and whoops that Streep had, Stone got very nervous and promptly retraced her steps. Methinks Miss Stone ought to go back to awkwardly dancing with Ryan Gosling; even that's less painful to watch than her feigning knowledge about current affairs.

The over-arching smug tone of most of the acceptance speeches was that the world as it was sucked, but thank God for these talented luvvies for producing works of art to redeem everything. I love films (a hell of a lot more) than the next person, but this is nothing but self-congratulatory, disingenuous bullshit.

There are two reasons why the BAFTA ceremony being transformed into an episode of Daily Politics was so insufferable. The first is that I watch films precisely to get away from all that bollocks, to take my mind of it. Films are supposed to be escapism.

The second is the irony is that, a character from one of last night's honoured films, Daniel Blake, would probably have voted Brexit, given the way he felt the establishment left him behind. Would his action be misguided? Probably. Naive? Almost certainly.

But it was jarring, to say the least, that a collection of people who purport to care so much about the everyday man and the characters they were representing, who all kept blathering on about 'empathy' in their BAFTA Nobel Peace Prize speeches, were turning a moment where they should have just been accepting their silver mask-face award thing and buggering off graciously, into a sanctimonious political rally.

And that's exactly why I shan't be staying up to watch the entire process all over again at the Oscars this year.

After all, If I wanted to be hectored by a bunch of hypocritical champagne socialists who never practice what they preach for hours on end, I'd read The Guardian.

In today's Metro, I found a perfect e-mail that can act as a cliffnotes version of my rather lengthy blog post: 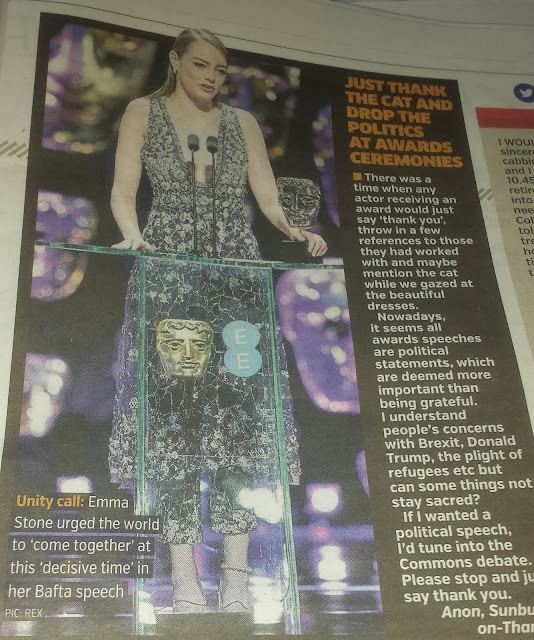 How apropos that they used a picture of Emma Stone, given it was her attempts to play Katniss that brought some of the biggest cringe of the night.
Posted by Emma at 2/13/2017 04:07:00 pm

Hi there! This post could not bee written aany better!
Reading throlugh this post reminds me of my old room mate!
He always kept talking about this. I will foward this article
to him. Pretty sure he will have a good read.
Thank you for sharing!