Part 1, aka the three I disliked the most, were discussed here. Now for 5-1, ranging from 'I quite enjoyed with, with reservations' to 'I absolutely bloody loved it'. 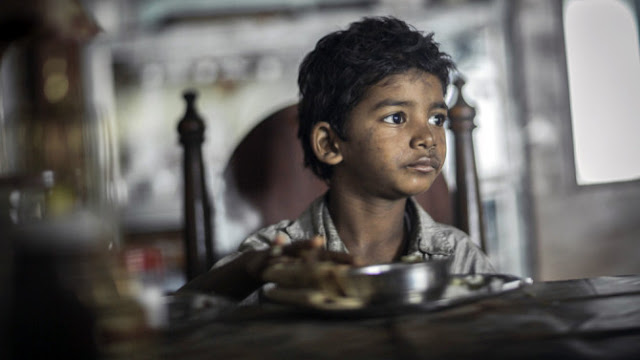 Garth Davis’ adaptation of a true story about a man who uses Google Maps to trace the family he was separated from is a film of two halves.

The first is thrilling and heartrending, as young Saroo (Sunny Pawar, absolutely adorable) gets lost from his family and has to fend for himself on the streets before ending up getting adopted by a kind Australian family. The Oliver Twist-inflected sequences which highlight the peril of roaming the mean streets of Calcutta and the near-misses with danger (and child traffickers) he incurs are terrifying. How this got passed at PG over here is beyond me.

In the second half, however, Sunny has grown into a man, a man in the form of the dashing-but-none-too-expressive Dev Patel. The weakest by far of the 5 best supporting actor nominees this year (and, to add insult to injury, clearly a lead performance), it’s really hard to care for his cause as he stares into his laptop all day, in between throwing strops at his girlfriend Lucy (Rooney Mara, in by far the most blah role she’s taken) and shutting out his mother.

So, a strong first half, and a boring and indulgent second one, but there were a few constants throughout the film. Nicole Kidman was very moving as Saroo’s adoptive mother, emulating love and maternal warmth in every gaze she gives him, even when his whiny behaviour doesn’t merit it. 6.5/10. 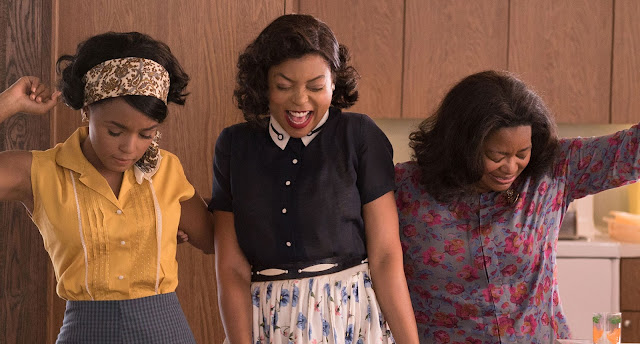 Another true story, but a far more compelling one, about three female African American women whose work behind the scenes (the ‘hidden figures’ refers to the characters and their calculations) helped NASA’s achievements in space immeasurably.

It’s an absolute joy to watch actresses as charismatic as Taraji P. Henson, Octavia Spencer and Janelle Monáe (this film, along with Moonlight, are her only two acting roles, yet she takes to the film screen with the same poise she graces the music stage with) light up the screen as intelligent, strong women who recognise the brazen injustice of having to work twice as hard as their white male counterparts for half the pay, but rather than complaining, letting their extraordinary brainpower make them indispensable to NASA’s mission.

Such is the likeability and loveliness of the film and its message that it seems churlish to point out a few flaws. There were some scenes which were pure cheese, namely, when Kevin Costner’s single-minded boss breaks down the ‘Colored Toilet’ sign with a hammer then delivers one of 2016’s cringiest lines, ‘here at NASA, we all piss the same colour’. Another was, and whilst I recognise the point it was making, the shots of Katherine running from one building to another carrying a thick stack of notes to check in the loo was a bit contrived, as, realistically, she could check, at most, two booklets during her toilet time.

But overall, I’m more than happy to forgiven Hidden Figures these dud sequences, because of the charm of the cast and the heart-warming story they were telling. 7.5/10

David Mackenzie’s surprise sleeper hit did not, on paper, grab me. A neo-Western (not a genre I’m too fond of, see my review of that Magnificent Seven mess) about two brothers robbing banks just sounded so hackneyed. But in execution, it turned out to be pretty ace.

Excellent performances from Chris Pine (already a handsome man, his dishiness was accentuated in cowboy mode) and Ben Foster as the two brothers in question, and Jeff Bridges as the shrewd detective on their tails, second-guessing their every move, gripped me from the outset.

Further to that was a canny curveball in that the brothers' bank-robbing wasn't motivated by simple avarice, but rather, correcting a few offences the banks had committed against their family. The fact this meant there were no clear-cut ‘goodies’ and ‘baddies’, and the lines of morality blurred, left you frequently see-sawing as to who to root for, the cops or the robbers.

Whilst its tight plot is directed, shot and edited proficiently, Hell or High Water has no grandstanding cinematic flourishes that makes the film, in a way, the most low-key of the nine films nominated. The Oscars don’t usually go for subtle, but in this case, I’m very happy they have. 8/10 (my current 9th of the year). 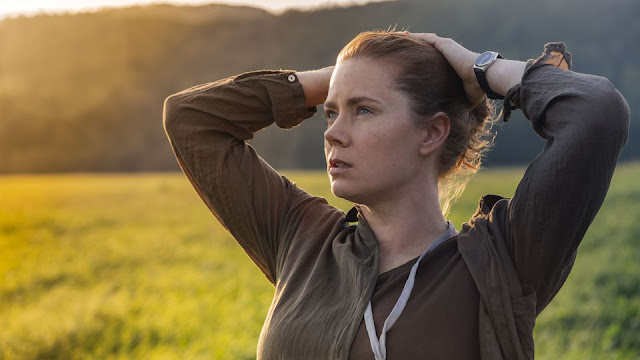 Another film which completely confounded my expectations of its genre, another of which I’m normally not interested in (sci-fi)!

Despite a slightly languid opening act, Arrival slowly establishes itself as a cerebral and compassionate look at language, barriers and whether it's better to try to try to communicate with what we do not understand, rather than go on the offensive.

Amy Adams exudes intelligence and empathy as a softly-spoken linguistics professor, harbouring a secret which she herself can’t fully fathom, all the while having to contend with aliens who are trying to deliver a crucial message to Earth. In gradually deciphering the aliens’ communications, it makes her more introspective, and fully understand the burden that she’s carrying around.

The messages of Arrival are particularly relevant in today’s precarious political climate, but the film establishes them in a non-preachy manner unlike just about every BAFTA acceptance speech, and leaves plenty open for the viewers’ own interpretation, to discuss long after the credits have rolled. 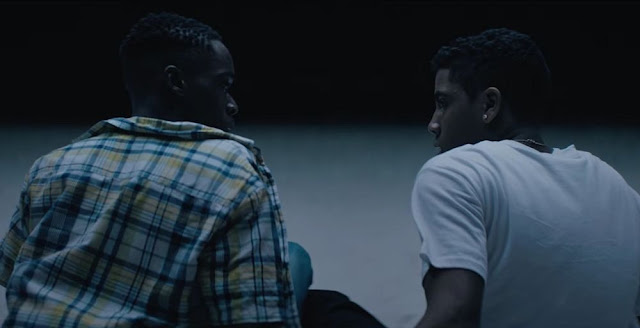 Barry Jenkins’ breathtakingly good coming-of-age tale is told in three parts:
i) neglected boy Chiron (‘Little’) finds a father figure in the form of local drug kingpin Juan, who just so happens to be selling to Little’s heroin addict mother.
ii) A lanky, emaciated teen, still bullied by his peers and still worried for the sake of his mother (who has by now given up all pretence of masking her habit in front of her son), the film teases with the prospect of deliverance when Chiron has an unexpected sexual encounter at the beach with his best friend and secret crush, Kevin. However, a malicious school bully has different ideas.
iii) Now a grown man and a drug dealer himself, transformed by his adolescent experiences, he goes by the name of ‘Black’ and doesn’t take guff from anyone. Receiving a phone call from Kevin out of the blue, he revisits his mum and friend.

The sparse storytelling technique means it is up to the audience to fill in the blanks (what happened to Juan? What did the ending signify?), and Nicholas Britell’s elegiac classical score and James Laxton’s dreamy cinematography full of neon shades help the audience get lost in the experience, all the while having a handle on the fact that the power of Moonlight is what is in the unsaid.

Mahershala Ali and Naomie Harris are well-worth their Oscar nominations, but the MVP of Moonlight for me, was Trevante Rhodes who has shades of Heath Ledger in Brokeback Mountain in his portrayal of an inarticulate man, stifled by his romantic pain and trying desperately not to show it.

The two scenes he shares with Paula and Kevin were absolutely electrifying. In the former, the way he was unable to meet his mother’s eyes as she pleaded for forgiveness for being such an errant parent, and in the latter, the cathartic moment he finally admits how lonely he’s been to Kevin, pierced my heart like a dagger. That is acting.

Moonlight is assured, memorable, nuanced and genre-transcending film-making. Even though I’m neither African-American or gay, this film resonated with me emotionally in a way very few others do.

If the Oscars were about ‘deserving', Moonlight ought to sweep on Sunday. #FackLaLaLand

I believe I promised you graphs. Well, here's a graph. I drew boxplots of the marks out of 10 I gave each of the BP nominees, by BBFC rating. There were only 3 BBFC ratings represented this year: PG, 12A and 15. 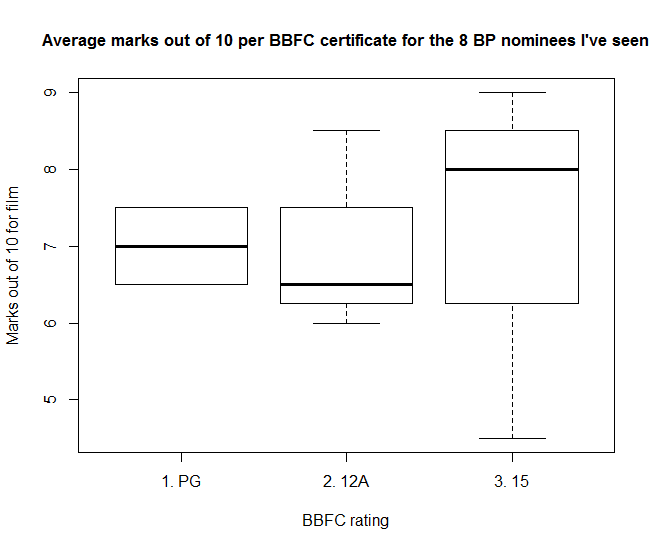 Did you know that you can create short urls with Shortest and make cash from every click on your short urls.