When we first came to England, my family didn’t have that much money and so despite loving films, TV and all things multimedia from a young age, I didn’t actually own that many VHSes. One of the few videos I did possess were episodes of 西游记 [Journey to the West], taped off the TV.

An extremely popular Chinese children’s novel, it’s had many adaptations, from TV show to film to plays. Even though I recognise that, were I to watch said episodes now, I would pick up on its low production value, campy acting and all-too-convenient deus ex machinas at the end of almost every episode, I loved that show as a kid, and I still regard the concept of it with fondness.

For that reason, when I clocked that the Chinese cinema-friendly Odeon Panton Street were screening Journey to the West 2, I leapt at the chance to see it, despite not having known about Journey to the West 1’s existence. I knew the general construct pretty well (a Buddhist monk, accompanied by three disciples possessing magical powers, the most prominent being monkey Sun Wukong, carries out his life calling to capture demons), so figured I’d be able to follow the plot despite not having seen the first. 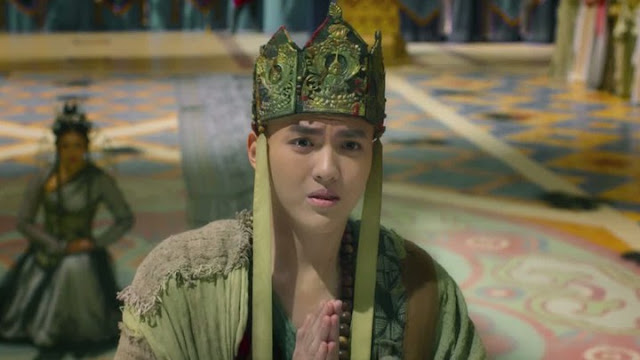 Sadly, due to the haphazard way the film was put together, The Demons Strike Back did little justice to a show that I’d loved so much as a kid. Casting K-Pop pretty boy Kris Wu as Tang Sanzang, in theory, makes sense, as both Wu and Tang Sanzang possess a certain scrawny, effeminate quality. However, from what I remember of the show when I was little, when push became shove, Tang Sanzang could transcend his softly-spoken, pacifist demeanour to demonstrate exactly why he had been chosen by the Buddhist gods for his thankless mission; a true force of nature.

Kris Wu, if you remember, came third on my list of Worst Acting performances of 2016, for his services to the field of carving up a slice of ham in So Young 2: Never Gone. Given first and second place on that list were almost by default awarded to the DC double act of Blahra Delevingne and Jesse Eisenberg, that’s saying something about how bad his acting was. And in Journey to the West 2, he shows that So Young 2 certainly wasn’t an off-day.

He has all of Tang Sanzang’s outward weediness yet none of his internal mettle, and is utterly charisma-less. The scenes where he yells at his misbehaving monkey companion Sun Wukong were meant to be impassioned and filled with urgency, leading the audience to sympathise with his plight. Under his delivery, he just sounded whiny and made you sympathise with the errant brat Sun Wukong instead. If Chinese cinema really wishes to proper, they need to enlist a leading man with far more acting chops than the over-acting, unnatural Wu possesses.

The BBFC report for Journey to the West 2 notes, ‘there is moderate fantasy violence, often slapstick in nature’, which reads almost as a line of unintentional shade, given that the fight scenes definitely weren’t supposed to be slapstick. As we all know from So Young 2 Never Gone’s 15 certificate, the BBFC sometimes have trouble interpreting Chinese cinema, but as someone who’s familiar with the series and the characters, I believe what the fight scenes were aiming for intense. I’ll let you decide what it means that viewers read them to be slapstick instead. 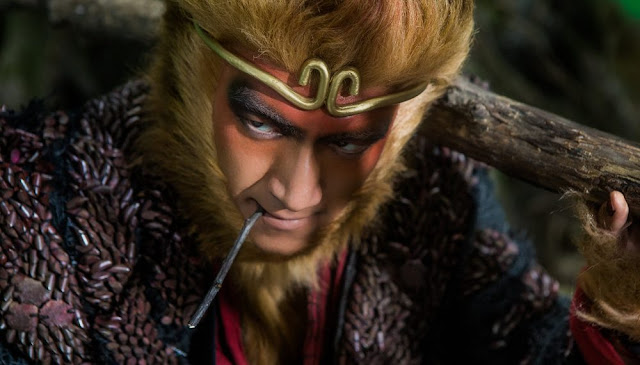 All that being said, watching this film in a crowded cinema of Chinese movie-goers (there wasn't an empty seat in the house last Friday) who laughed uproariously at the lame jokes was somewhat infectious. I, like them, was guilty indulging a spot of nostalgia, and under Stephen Chow (the protagonist from the fantastic Kung Fu Hustle)’s cheeky penmanship, occasionally the humour and sly innuendo did bang. There’s a lack of self-awareness about the film that you don’t get in contemporary oh-so-knowing Hollywood productions, which, coupled with the amusingly low production value and gaudy effects, meant it’s easy for the viewer to get lost in the delirium.

As such, after about half an hour I put my prejudicial opinions of Kris Wu’s acting behind me, embraced the tacky CGI (this film won’t be troubling the Oscars any time soon) and just enjoyed the characters and their journey, which traverses all manner of ridiculous plot turn, including a twist I genuinely didn’t see coming. Towards the end, the film flickered with a hint of emotion, and the payoff, whilst nothing compared to the devastating lollipop scene in Kung Fu Hustle, demonstrated that the filmmakers’ hearts were in the right place at least.

Full disclosure: the film’s mostly garbage, but unlike other 5/10s I’ve awarded (hi Girl on the Train and Sausage Party), at least I walked out of the cinema smiling.

Man, you really do have the critical thinking of a 5-year-old. You really shouldn't be reviewing movies if you can't even tell what the scenes were aiming for and you criticize the certification because you cannot process anything in your head. Seriously, you're lacking.

In So Young 2, the female lead was initially resisting the sexual advances of the lead when they were in a motel together. In fact, in the book, she was point-blank raped - the male went on ahead even though she kept saying no. They changed that a bit by letting her consent in the end in the movie, but it doesn't change the fact that he did try to touch her and do things to her despite her resisting which would justify the rating.


In Journey to the West 2, a lot of the action scenes are meant to be slapstick. Like Wukong attacking Pigsy in a sequence where he kept punching non-stop and clothes were flying everywhere. Or Pigsy's face getting deformed. Or Tang Seng spinning like a top on the ground when Wukong was also spinning like a top. Those are all slapstick. Maybe you need to brush up on your Stephen Chow knowledge or just the general definition of the word.

As usual, your review is biased, hateful and uninformed. Which is expected from the likes of you.