I usually use 50 words when one will do, but I'll keep this one short: do not go to this place.

I chose it because I had a limited amount of time to catch up with an old friend, and sacrificed quality of restaurant for proximity to where we were standing. From the outset, we could see that the quality of the food wasn't great - all mass produced meat dishes, rice plates and the usual, but beggars can't be choosers and for £9.99 (although it came to £11 because the restaurant helps itself to a £1 service charge, fuck that, the service was horseshit, even by Chinatown's taciturn standards), we couldn't really argue.

Well, that's what we thought. But, £11 is £11, and whilst we weren't paying a lot for the quantity we were getting, it sure as hell skimped on quality. Even sweet and sour chicken, an old favourite of mine and very few Chinese restaurants muck up, just because it's so easy and cheap to produce, tasted awful here. I'm not convinced the chicken was actually chicken, and the sauce that came with it was watered down too. The beef definitely wasn't beef, so there's your false advertising. I piled some chips on my plate, just because I thought "how can you go wrong with chips", but even the English favourite was bastardised by being cooked too dry and they tasted utterly stale. 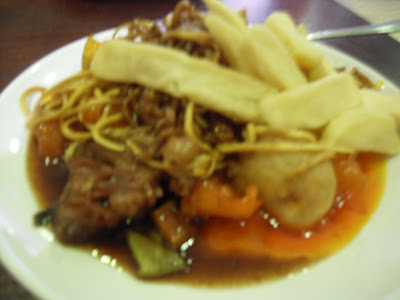 
There were a few things I managed to consume - the noodles weren't horrific, but then again, if any place in Chinatown can't cook noodles then I really do worry for them. And the pineapples were nice (but the mango cubes were not, so don't even think about it.) As for the service, well. I'm Chinese myself, so I know better than anyone that Chinese people be not the nicest. I don't expect decent service of any kind when I walk into a Chinaman restaurant, unless I'm with my father, because then the waiters bend over backwards in the hope that he'll hook them up with a job (troll, keep dreamin' sunshines). So I'm not naive; I didn't expect miracles. But when I asked for a top-up of water, this Chinese woman rolled her eyes at me and muttered "one minute" in the tersest of tones. Charming!

Still, when you work in a shack as joyless as Hong Kong Buffet, it's no wonder that she takes her anger at life out at the punters. Working in Hong Kong Buffet, one of the worst restaurants I've ever been to in my entire life, would be enough to drive any waitress to drink, or worse.