Just three this week, a terrible film, a terrific film, and a film that I liked a lot more than I expected to; all three films are about family.
You Again (Andy Fickman, 2010)

Kristen Bell plays Marni, a girl who was a “loser” in high school with her big glasses, dodgy haircut and constant clumsiness, and thus a massively easy target for the school’s lead cheerleader Joanna. Eight years later, she is a successful VP at an advertising company, and goes back home for her brother’s wedding. So imagine her horror to discover that the woman her brother’s marrying is the bullying bitch herself. Of course, it’s years later, and she’s seemingly turned over a new leaf, but Marni, having endured her bullying for years, is less than convinced that this leopard has changed her spots.

I was not won over by this film, to be honest. The problems I had with it were the exact same faults I found with Bride Wars, that being that the characters were too sketchy, their motives and actions too exaggerated and unbelievable, and the conclusion far, far too part. The directors and producers have clearly tried the whole “bung some talented stars in in the hope that no-one notices how awful the writing is” formula by throwing a subplot with a similar rivalry between Jamie Lee Curtis and Sigourney Weaver in, and Victor Garber is good fun as ever, but even they can turn shit to gold. I was not impressed. Never again.
Paper Moon (Peter Bogdanovich, 1973)

After watching Sofia Coppola’s “Somewhere” last weekend, I got a huge craving to re-watching one of my favourite films, Paper Moon, which I’d noticed shades of in Coppola’s film. In it, real life father-and-daughter pairing Ryan and Tatum O’Neal play con man and tagalong and the funny, weird and sneaky little road trip they make together. I absolutely adore Tatum O’Neal in this film, it’s one of my favourite child performances of all time, and Addie Logins is such an adorable girl; she smokes and steals, but has a heart with it—she has no qualms about stealing from the old lady with more money than sense, but can’t bring herself or her (possible) dad to steal from the single mum with a huge family to look after. Madeleine Kahn offers some comic relief and there are some amusing supporting turns, but this film is all about the chemistry between the O’Neals. One of the sweetest and cutest films of all time, Paper Moon came out in between Daddy Coppola’s two Godfather movies, but I love it more than both of them put together.
Conviction (Tony Goldwyn, 2010) 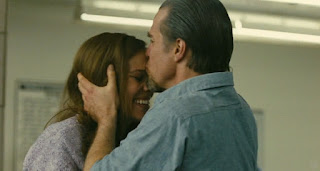 Hilary Swank plays Betty Anne Waters, born from a dodgy family and flailing single mother, whose brother, Kenny Waters (played by Sam Rockwell) is wrongfully sent to prison for a murder he didn’t commit. Everything is against Kenny: DNA, his troubled background and history of breaking & entering, not to mention an entire array of witnesses who swear in court that he bragged about killing the woman.
Betty Anne, being the only person who seems to believe her brother’s innocence, decides to put herself through Law School in the hope that she can get him out.
I liked Conviction a whole lot more than I thought it would. Despite the hugely hillbilly vibes the film exuded, it was still a thoroughly entertaining and gripping drama with an understated turn from Swank (I do hope she gets nominated for an Oscar, I preferred her over Natalie Portman in Black Swan to be honest), and an equally good turn from Sam Rockwell.
Juliette Lewis absolutely steals the show in an ultra de-glam cameo too. Furthermore, anyone who knows me ought to know how much I love my redemptive dramas wherein the misunderstood guy, after years of tribulation, finally gets his atonement, and indeed, it was the shades of Shawshank (the 'earn your happy ending' trope is a favourite of mine!) that rendered the film a big win for me. One of the finer films of 2010.
Posted by Emma at 1/09/2011 07:21:00 pm

Divorce is the end of a happy life. Divorce is certainly an end, but it can also be a beginning to a new and fulfilling life being a singledad or mom. It is possible to build a better life post-divorce than the one you had before. Figure out what it is that you want out of life, and what you need to do to get there. For advice and help Visit:

Urgh, I completely forgot to keep an eye on the limit this month!! Bah.