Two can keep a secret, if one of them is dead. 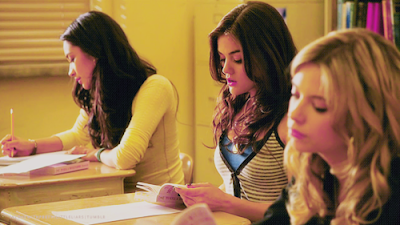 “Pretty Little Liars” is the latest American teenage drama to captivate me and give me something to look forward to on a Tuesday morning. Based on Sara Shepard's unflinching teen novels of the same title, It revolves around four girls: former fatty-turned-it-girl Hannah Marin (Ashley Benson), a swimmer who’s harbouring her feelings for her friend Maya due to her strict conservative parents Emily Mitchell (Shay Mitchell), competitive Spencer Hastings who feels the need to compete with her catty elder sister for everything (Troian Bellisario), and Aria Montgomery (Lucy Hale), who has spent a year abroad in Iceland and on getting back, is carrying on with the dishy Ezra Fitz, who is soon revealed to be her English teacher. From the intro alone, there’s more than enough spice and suspense to eclipse a whole season of The O.C., but to complicate matters, the thing that binds the girls together is their having used to be friends with the school’s ultimate Queen Bee, Alison diLaurentis, a charismatic, beautiful, but very, very cruel-minded girl who enjoys putting others down, playing games and treating people like puppets. Said Alison went missing a year ago, and her body has only just now been found. But Alison’s legacy still lives on when each of the four girls start receiving texts and e-mails taunting each of them with their secrets.

Essentially, “Pretty Little Liars” can be described as a sort of Heathers-meets-gossip girl-meets-Desperate Housewives. And, considering how I like all thereof those things, it’s no surprise that “Pretty Little Liars” proved a highly engaging and entertaining watch. The performances are accomplished, Bellisario is the only one who truly stands out for me but all the girls do their jobs capably, the plotline has enough twists to constantly keep you guessing, and the opening credits, god lord. It took me a good give minutes to fully realise how creepy the opening credits truly were, but they’re creepy in a genius way. In between trying to track down Alison’s killer and who the identity of the mystery “A” is, the girls have plenty of love problems, family woes and other troubles, so there’s tonnes to keep you entertaining. Oh, and the outfits are to die for, unsurprisingly. Yet despite each of the four leads looking gorgeous throughout, I still found 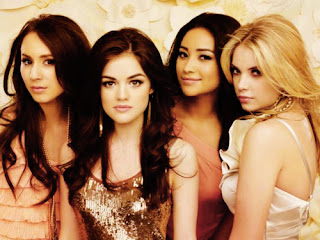 myself rooting for and caring about their characters, despite the mistakes they made, a mark of good/interesting characters. What I love about “Pretty Little Liars” is that as each episode goes on, more secrets are revealed, and we find that Alison is far from the pretty sweet little girl she would have everyone believe she is, and how the secret about her is darker and a lot more disturbing. So I highly recommend “Pretty Little Liars”, get on it!

And, as it's Monday, I want to show you two pieces of real mmmm. Ladies and gents, check out your Spider Man leading man and lady, Emma Stone and Andrew Garfield. I lovelovelove Emma's white dress isome girl. Aaaargh.ul, swaggerous, talented, awesome girl. Aaaargh.
Posted by Emma at 1/31/2011 10:29:00 pm

Sorry but it's not good! I am willing to concede that Mischa Barton is a good actress though, so there's your improvement!

It started as "oh God no", but as realisation dawned on me that Drogba is turning 33 this year, and probably won't be leading Chelsea's attack forever (:( ) as well as the seeing how much it irked all the Liverpool fangirls, I've now come to turns with the news. ;) Not sure how well Chelsea will play under 4-4-2 when we're used to 4-3-3, but we shall see!

Scotland is great, the question is, when are you gonna come see me?