Three movies about teenagers and one about stammering.

My exams ended on Friday, so I’ve basically just had a big-ass movie binge since then (along with catching up with Pretty Little Liars, which is fan-bloody-tastic!) 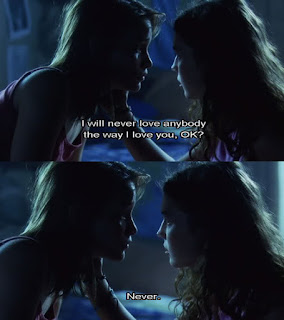 Mischa Barton plays shy, unsure Mary “Mouse” Bedford, who feels alienated from her dad and stepmother, who at the start of the film drop her off in a girl’s boarding school. She’s placed in a room with Piper Perabo’s charismatic wildchild and her popular best friend Tory (Jessica Toree).

She soon realises that Tory and Paulie are more than just friends, and whilst Mary gets used to the idea and Paulie loves it, Tory has trouble admitting to herself that she could be in love with another girl.

Lost and Delirious is beautifully shot and scored, and although there are moments which descend into laughable histrionics, it still remains a hugely affecting and poignant look at young love and loss.

Mischa Barton in particular impressed me me; whereas I’d always found her annoying in The OC, here, her subtle performance is more on the level of her great work in Lawn Dogs, the epitome of youthful charm and sweet innocence.

Jo (Meaghan Martin) joins a new school, where, through a sequence of events, she is offered money to be friends with the school loser, Abby. Jo’s college fund is non-existent, so, whilst being morally opposed to the offer, accepts it as she’s financially compromised. Her befriending Abby does not sit well with the school’s mean girls, also known as The Plastics, who rule the school with an iron fist, inadvertently starting a war with them.

What ensues is a range of bitchy schemes which seriously cross the line and are just downright unfunny. The whole film is just a cringe from start to finish, Martin has no charisma to carry the film and Desperate Housewives’ Maiara Walsh lacks the Machiavellian-yet-engaging quality that Rachel McAdams’ Regina George .

What made the original so funny were all the pithy one liners and great banter from Tina Fey’s A-grade script. This film failed to raise a single chuckle from me, and the one good performance came from Jennifer Stone as the loveable loser Abby.

The rest was just a total fail.

Colin Firth stars as Albert, the Duke of York. Being royalty, he is expected to give the odd public speech or two. Unfortunately, he has a big case of the stammer. Through meetings with Geoffrey Rush’s maverick speech therapist Lionel Logue, he slowly begins to gain confidence and gains ascension to the thrown, and goes on to be recreated as King George, who delivered many of England’s speeches during the war.

I was a little underwhelmed by The King’s Speech, truth be told. I’d heard so much about it, and the trailer looked excellent, but the film left me somewhat cold.

Whilst I thought Firth and Rush were solid (although if Firth beats Eisenberg at the Oscars, that'll be a travesty) and enjoyed their rapport with each other, and the score by Alexandre Desplat was a masterwork in film music, the rest didn’t really do anything for me. Helena Bonham Carter was completely blah and the it all looked and felt like a bit of a TV-movie, albeit a strong one.

Mean Creek (Jacob Aaron Estes, 2004)
Wonderful taut, gripping drama wherein Rory Culkin (following Mischa Barton pleasantly surprisingly me in Lost and Delirious, the formly dubbed “annoying Culkin kid” does so too) stars as Sam, a boy who is getting bullied by George, an overweight and troubled boy with learning difficulties at his school. His brother Rocky and his loose cannon friend Marti decide to invite George on a boat trip and teach him a little lesson.

Unsurprisingly, the whole claustrophobic set-up is just set for a fall. The acting from the young cast are very good in Mean Creek, and I’m extremely impressed with how the film doesn’t point any fingers, instead just telling the story. In the end, it’s all fairly sad and bleak, but the journey is well worth it; Ryan Kelley is the stand-out as the sensitive Clyde.
Posted by Emma at 1/30/2011 07:21:00 pm

Yeh I agree The King's Speech is hugely overrated, especially in the UK