If music be the food of love, play on

My captain didn't play in England's 2-1 win against Tunisia on Monday, and thus, I foresee myself spending much of this World Cup releasing an album, full of nothing but songs moaning about Gaz's lack of game time! 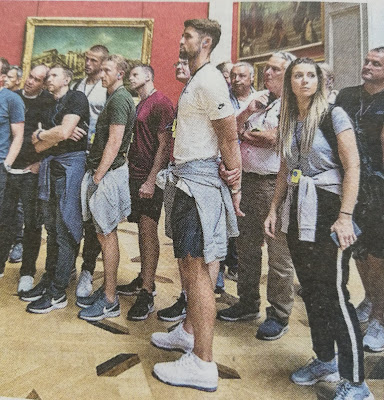 He may not be starting, but Cahill's presence in Russia means the British media are at least taking photos of him in Russian art galleries for me, so I can't whine too much.

Hmm, the video is slightly over the 100 Mb blogger limit, so here's the Dopbox link to it! 🎸 Notice how I don't refer to the other England players in the song as their actual names (Kyle MacLachlan, Harry Styles, 'Jerry Maguire', 😂). It's a mark of disrespect, that I don't think the men important enough to bother learning their actual names.

I have the 'cos at least France start N'Golo Kanté, and now and then they play Girouuuuuuuud' part stuck in my head. Here I was, on the train home from my Institute's BBQ on Wednesday it, singing it:

Track 2 on the album: 'Gareth Southgate'. It's meant to be a parody of 'City of Stars' from La La Land, altho I'm not sure if my quivering voice and hesitant finger work made that clear enough! 😂😂

Personally, I think I'm a better singer than Emmas Watson and Stone, although that's not me being boastful. A cat being strangled to death sounds better than those two. 💩

Tomorrow, England play Panama, and as the British press have been so kind as to leak the starting XI, I know ahead of the game that Gary Cahill won't be starting for that, either. So expect me to take my grumbling up a level. I'm not covering La La Land songs any more; I'm covering The Greatest Showman songs.
Posted by Emma at 6/23/2018 09:14:00 pm

Appreciating the commitment you put into your website and detailed information you present.
It's great to come across a blog every once in a while that isn't
the same unwanted rehashed material. Wonderful read!
I've bookmarked your site and I'm adding your RSS feeds to my Google account.

My brother recommended I might like this blog. He was totally right.
This post actually made my day. You cann't imagine simply how much time I
had spent for this info! Thanks!

Hi there very cool web site!! Man .. Excellent .. Amazing
.. I'll bookmark your site and take the feeds also? I'm satisfied to seek out so
many helpful info right here in the submit, we'd
like work out more techniques in this regard, thank you for sharing.

This paragraph will help the internet visitors for setting up new webpage or even a weblog from start to end.

Very nice post. I just stumbled upon your blog and wished to say that I've truly enjoyed browsing your
blog posts. In any case I will be subscribing to your rss feed and I hope you write again very soon!

I was curious if you ever thought of changing the layout
of your website? Its very well written; I love what youve got to say.
But maybe you could a little more in the way of content so people could connect with it better.
Youve got an awful lot of text for only having one or 2 images.
Maybe you could space it out better?

Anonymous said...
This comment has been removed by a blog administrator.
3:21 am