Now that I’ve got the substantial snark out of the way, it’s time to honour the good stuff! Part 1 and part 2 of my favourite films of 2016, if you were wondering what my taste in films is like!

These following five movies constitute the bright sparks of 2017: the movies that bought a smile to my face, made me feel passionately, or triggered deep philosophical thoughts in my otherwise pretty one-track mind (nah, let’s be fair to myself, two-track. In that I think about Fionn Whitehead and Aneurin Barnard).

After the dross that was Batman vs Superman and Suicide Squad (which, despite me giving 7.5/10 initially after watching it, I’ve realised after reflection that the jukebox-style soundtrack and Viola Davis playing a red wine-drinking, steak-eating HBIC papered over a whole litany of flaws), the DCEU finally get it right.

A woman’s touch seems to have helped; Patty Jenkins’ envisioning of the well-known story of the Amazon Goddess with superhuman combat skills and a magic lasso is exhilarating, well-crafted, and wears its heart on its sleeve.

Wonder Woman boasts the best action sequence of the year: the adrenaline-pumping ‘No Man’s Land’ scene, which, in addition to being stunningly shot, is one of the few pieces of cinema that has made use of slow-motion without it seeming clichéd or cheesy. Danny Huston and Elena Anaya make for genuinely unsettling villains, which is a welcome change after the 2016 horrorshows known as Cara Delevingne as ‘Enchantress’ and Jesse Eisenberg as ‘Lex Luthor’, two performances that still give me nightmares (I maintain those 10 complaints the BBFC got for BvS were all due to Jesse’s akting).

But without the central relationship between Gal Gadot’s beautiful, brave, but guileless warrior princess and Chris Pine as ‘Steve Trevor’, the equally attractive, savvier pilot, Wonder Woman wouldn’t have resonated with me so strongly.

The two are splendid to look at (genuine contenders for the hottest screen duo in any film, ever, and recipient of first and second place on my yearly eye candy lists), share an easy, warm chemistry, and sell the message at the centre of WW: to win the war, sometimes you have to lose the battle. The sacrifice Diana suffered for the sake of humankind brought tears to my eyes.

Kudos to Jenkins, Gadot, Pine, and everyone involved in creating that rare thing: a superhero movie with heart.

Luca Guadagnino’s portrait of a lusty Italian summer conveys the agony and ecstasy of falling in love for the first time, as experienced by 17-year-old Elio, a precocious son of academics.

In some ways, Elio is sophisticated, well-read and astute. In others, he is as naïve as Wonder Woman, and this duality is conveyed with understanding and a wisdom beyond his years by Timothée Chalamet, who, at 22, became the youngest man in 75 years to get an Oscar nomination for Best Actor for his natural performance.

And oh, how deserved that was. Chalamet has a deft handle on his character, displaying Elio’s musicality with casual élan (Chalamet plays the piano and the guitar in the film, and unlike Ryan Gosling, who the composers of La La Land had to invent a nice grade 2-level tune so that he could “play” it, TC can actually play the piano), speaks three languages, and his green eyes and expressive twink face perceptively convey how Elio’s initial resistance to Oliver’s slightly cocky demeanour quickly evaporate to make way for both curiosity, begrudging admiration and most potently of all, his burgeoning teenage hormones. 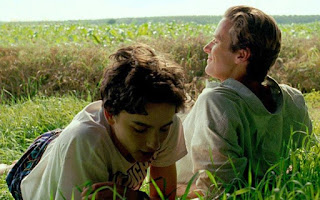 Whilst the relationship between Armie Hammer and Chalamet’s characters is the focal point of the film, I found Elio’s parents’ unconditional love for him even more touching.

The film’s pivotal scene, where Mr. Perlman tells his son to love who he wants to love, and that by shielding their hearts, people only live half a life, is extremely moving.

Stuhlbarg’s elegant and eloquent delivery, Chalamet fully embodying his character’s broken spirit as his on-screen father speaks, and the simple yet universal message render this scene one of the most profound in recent years.

When it comes to love, pain is inevitable.

Nothing encapsulates this as well as the forlorn look on Timothée’s peachy face as he stares into the fire at the end.

Maverick indie filmmaking brothers Josh and Benny Safdie direct this taut, lean thriller, which doesn't have an ounce of excess fat, and is all the more gripping for it.

Connie Nikas (Robert Pattinson, in as un-Cedric Diggory a role as you can possibly imagine) pulls his mentally handicapped brother Nick (co-director Benny Safdie) out of a therapy session so that he can assist him in a bank robbery. The robbery does not go as planned and Nick is arrested. The rest of the film follows Connie in real time as he begs, steals, borrows and resorts to whatever underhand tactics he can to try to procure the bail funds for his vulnerable brother.

Made with a minimal budget, Good Time features enjoyable cameos from familiar faces (Jennifer Jason Leigh and Barkhard Abdi), and an unpredictable plot which sees Connie getting in increasingly hotter water. Filmed with close-ups and with New York basked in neon hues, the grungy world that Connie inhibits has never seemed uglier, yet, rivetingly so.

While the ‘crime doesn’t pay’ adage is clear, there are moments of black humour, and the protagonist’s irritating lack of self-awareness (Connie considers himself better than a petty drug dealer he crosses paths with, when the events of the film have illustrated him to be as much as, if not, more of a crook) render him pathetic, yet bizarrely charismatic.

Connie’s descent into hell through the night, expertly edited and accompanied with a pulse-pumping soundtrack by Oneohtrix Point Never, is a good time indeed.

With the zeitgeist hit of 2017, Jordan Peele, who started out in sketch comedy, shows there’s more to him than jokes and impressions in his clever satire of smug American liberals.

British actor Daniel Kaluuya, who has been plying his craft since Skins and valiantly made the best of whatever roles he’s been given, gets given a role that is worthy of his talents. Chris Washington is a photographer who realises things are amiss when he visits his white girlfriend’s affluent parents. 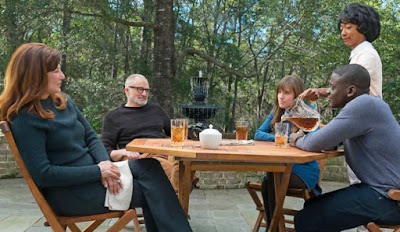 Get Out combines social observations, laugh-out-loud dialogue (Chris’ phone calls to his tell it like it is best friend punctuate the drama effectively) and in the final act, goes into full-blown horror movie.

Thanks to Jordan Peele’s clever script (which very deservingly, but somewhat surprisingly won Best Original Screenplay at the Oscars, given how he does not mask his disdain for pseudo-woke liberals in it), plot points never feel over-baked or contrived.

We’re as on edge as Chris is throughout, and he represents the everyman in the allegory of the way some people have no reservations about wielding their privilege against people of colour to benefit their own causes without a second thought. These people have become so adept at doing it that they’ll use and abuse you whilst smiling at you and pretending to be your friend, a trait that people of colour know, only too well.

ohai, hilarious movie! James Franco channels Tommy Wiseau himself by taking acting, directing and producing duties in this re-telling about the tortuous process that was filming The Room, commonly considered the worst film ever made.

Donning a greasy wig and facial prosthetics, James Franco transforms into Wiseau, so much so that his resemblance to brother Dave, who plays Greg Sestero, the actor Tommy latches onto, is undetectable. The brotherly chemistry between them lends well to the off-kilter dynamic between the two The Room stars.

The Disaster Artist is a laugh-a-minute film, littered with movie references, which both celebrates and ribs Wiseau for his eccentricities. There’s no doubt he was a nightmare to work with, as shown by the way he terrorises co-stars and obstinately refuses to be flexible around his shooting plans, thus causing Greg to lose out on a part in Malcolm in the Middle.

But the film clearly has a respect for the way he perseveres with his dream, despite constantly being told by everyone around him that he has no discernible talent. The Disaster Artist is a much more realistic depiction of Hollywood and the film-making process than La La Land (which seemed to suggest that if you put on a ropey one-woman show that about ten people turn up to, you’ll instantly become a famous film star).

The Disaster Artist has a much more sober view of the filmmaking, and how it can create jealousy and turn people into monsters. Despite all this, Tommy Wiseau still persisted with his goal of making a ‘real Hollywood movie’, and thus, the film is a poignant ode to those who pursue their dreams, even if they aren’t quite equipped with the skills to reach them.

Here’s to the fools who dream, indeed.

I'll post part two of this list next week! Not to give anything away, but you should do this which Dunkirk character are you? Buzzfeed quiz! I got Tommy... and my brother got George. Ahaha. 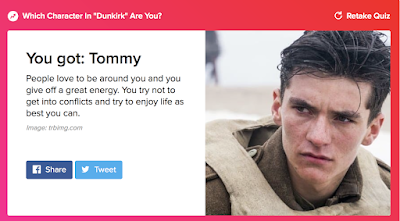 I was curious if you ever considered changing the page layout of your website?
Its very well written; I love what youve got to
say. But maybe you could a little more in the way of content so people could connect with
it better. Youve got an awful lot of text for only having 1 or
2 pictures. Maybe you could space it out better?

You're crazy but cute.