Red Sparrow's 15 Rating Should Never Really Have Been Here 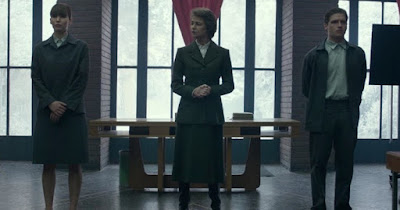 The only positive thing I can say about Red Sparrow is that Charlotte Rampling and Jeremy Irons were in. Although, after this, Batman v Superman and High-Rise, Jezza might want to find himself a new agent...


I watched Red Sparrow on Thursday (don't worry, I used my Limitless card to book a ticket to Kenneth Branagh's vanity project so I didn't contribute to JLaw's Box Office, then sneaked in). It was, as I expected, dreadful. After Passengers and mother!, I daresay a film this bad is the last thing Jennifer Lawrence needs, but there you go.


In addition to how dull, nonsensical (the time stamp on the film is 2017, yet Mary-Louise Parker's character is carting around government secrets on a floppy disk), ridden with laughably bad Russian accents and full of unintentionally hilarious lines ('You sent me to whore school!') something else that jumped out at me about Red Sparrow was how out-of-place it was at 15.

It's definitely the strongest 15 I've ever seen, much more so than High-Rise and Sausage Party, and I let the BBFC know in an e-mail:

I feel that several scenes in the film, as well as the overall theme and plot, is wholly inappropriate for 15 and should have been awarded an 18 rating.

Firstly, the conflation of violent attacks and nudity was not something I've seen in a 15-rated film before, and that confounded my expectations. There was genital nudity of a man in the shower whilst a woman hits him in an act of self-defence when he was trying to force himself on her. The circumstances that led to this attack thus carries an overtone of sexual violence, which made the sight of his penis unpleasant and jarring at 15.

The rape scene at the start of the film also carried an eroticised element (the victim having her knickers torn off her and thus being naked from the bottom down) which felt misplaced at 15.

There were several scenes of nasty, personalised violence in RED SPARROW, most of which individually which seemed very upper end 15. But I thought two scenes crossed the boundary into 18: the first, where Dominika is interrogated. The montage of her being tortured using water, and then beatings (including bashes to the face using a mallet) was really distressing, particularly because she was a young woman. The accumulation of those methods, all in one sequence, and the sight of her bruised face and red eyes after made the scene even more troubling.

The other violent scene that I thought merited an 18 was when the male protagonist gets his skin grafted. The focus on the weapons, the protracted nature of the scene, Nate's screams of anguish and the fact that the perpetrator was enjoying it were all reasons why this scene felt out of place at 15. The BBFC guidelines at 15 read, 'Sadistic or sexual violence is likely to receive a higher classification', and there was a definite sense of sadism in this scene.

I also feel that the entire segment of the film set in 'Sparrow School' is inappropriate for 15-year-olds, both in terms of themes and execution. The young adults who have been sent to that school are going because they have no other choice, not because they want to be there, which gives everything they do a coercive feel.

They are taught to submit their bodies wholly in order to extract secrets, including any kind of sexual act that is required. In one scene, the Matron instructs a young woman to perform oral sex on a man she finds repellent, and she is shown shaking and crying. The sexual threat in this scene went beyond what I am used to at 15.

In another, Dominika is instructed to 'allow herself to get raped' by a man who had previously tried to rape her in front of a classroom. Although the scene is contextually justified (as it highlights the cold, clinical rules of the School), it is complex and likely to surprise viewers based on what they have seen before in 15s. The rapey overtones, the sight of the protagonist taking her clothes off with breast and buttock nudity (giving the impending attack a sexualised edge), the voyeuristic element of having a class present and the sight and sound of the attacker masturbating as he prepared to force himself on her was, again, not something that I feel 15-year-olds have the maturity to stomach.

I know the BBFC short insight highlights all these issues, so viewers can check before the film. But due to the 75 character constraint and the gamut of adult content in RED SPARROW, the short insight for this film was far from an exhaustive list. More cine-literate viewers might check the website for the full breakdown of content, but not everyone has this awareness.

At the end of the day, people trust the decisions of the BBFC. If a film is rated 15, they will expect it to be OK for 15 year olds, and, regardless of whether then have read the extended insight beforehand, several of the grisly moments, the accumulation of the violent and sexual scenes, the conflation of violence and nudity, as well as adult plot and pervasive overtones of ‘use your body against your will, or die’, make RED SPARROW better suited at 18, in my opinion.

I would be very interested to hear why the aforementioned scenes were passed at 15, and implore the board to consider up-rating this film to 18.

Many thanks for your time.


The last time I e-mail the BBFC, they actually took action, which was a pleasant surprise. However, in that case, it was just a matter of adding a few extra sentences to their extended information. I'm now asking them to change the rating of a film.

Given Christopher Nolan's The Dark Knight got 364 complaints and the BBFC didn't budge on their decision to award it 12A, I highly doubt they'll pay heed to my e-mail.

But I expect at least an explanation from them. I didn't say so in the e-mail because it was excessively verbose as it was, but, some films, like Pan Chan-Wook's Stoker, got an 18 for a lot less. In that film, the sequence that led to the 18 certificate was the sight of India touching herself as she fantasised about a guy getting his neck broken. The BBFC cited the conflation of violent and sexual imagery as being too strong for 15, despite the individual components not being that strong. Well in that case, how was Red Sparrow not an 18 when it was much more graphic than Stoker (Stoker didn't have full-frontal nudity, for starters!!)

Although let's be real, they're hardly going to give me the #RealTalk: 'Hi Emma, we agree that Red Sparrow should be an 18. However, 20th Century Fox offered us a very nice golden handshake, so we cut a bit of the film and re-packaged that as a 15-appropriate film. Have a nice day!' 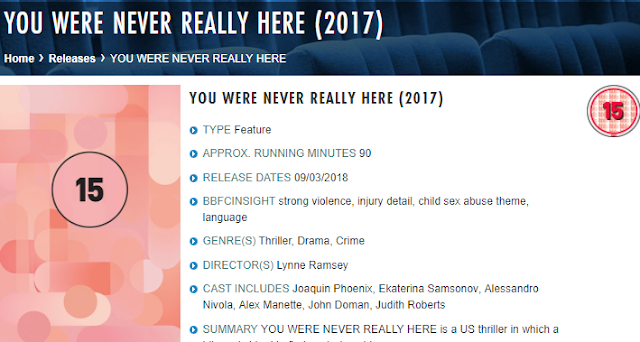 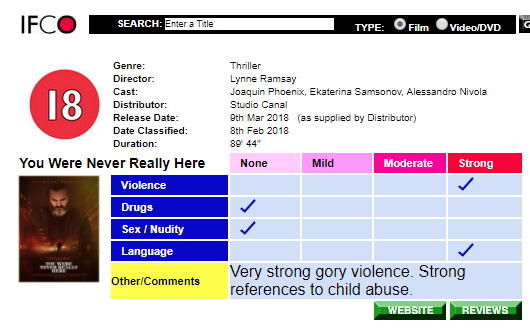 You Were Never Really Here is an unusual case of a film the BBFC rated 15 and the IFCO rated 18. Given that Ireland have 15A and 16, which allows them to rate the harder 15s (such as Logan and The Revenant) a 16, cases of films we gave 15 to and Ireland gave an 18, rather than a 16 to, are rare.

I saw You Were Never Really Here yesterday, and I think the 15 certificate is fine, albeit a high-end 15.

It's true that the protagonist goes round beating people up with a hammer, but most of that was shown via security camera footage, where the detail was blurred. So it wasn't like the 18-rated Drive where Ryan Gosling goes round hitting people in the face with a hammer, and you see the impact of the hammer on the face.

Thus, the lexicon 'very strong gory violence' from the IFCO is somewhat of an over-sell.

The child abuse theme, the other reason they've given it an 18, does make the film quite grown-up in terms of content, but, thankfully, no actual child abuse is shown on camera, just heavily implied (like when Phoenix's character Joe drags a paedo out of a room and he's naked. You kind of join the dots as to what was happening).

You Were Never Really Here definitely requires a mature audience, but I think content-wise, everything was within the 15 guidelines. So a '16' in Ireland would have been more appropriate.

Another film that Ireland rated a straight-out 18 despite it getting a 15 in the UK was Dirty Grandpa. That was a very crude film, but I was fine with it at 15 as tonally, it felt no different from Bad Neighbours and Mike and Dave Need Wedding Dates, two other puerile teen comedies. 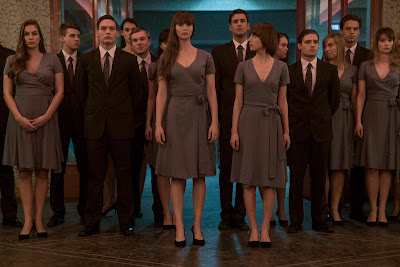 So the IFCO are weirdly arbitrary with what they decide to slap the 18 certificate on!

But, I'll say this for them: at least they use their 18 rating! The BBFC's cowardice with not awarding Red Sparrow an 18 is going to haunt them. The 40 complaints they got in 2011 for another 15-rated film who's title contained a colour and an animal, Black Swan, is going to be a drop in the ocean compared to the absolute mailbag of complaints they're going to get for Red Sparrow.

I'm a real film ratings nerd. I actually watch films solely to see if the BBFC rated it correctly (such as Fairy Tale - Dragon Cry). For more BBFC nerdiness, check out my archives!
Posted by Emma at 3/11/2018 05:58:00 pm

Perhaps the most distinctive version is the Italian hotdog served around Newark.

You might be attempting to refute your invalid interpretations of the things
I've stated.