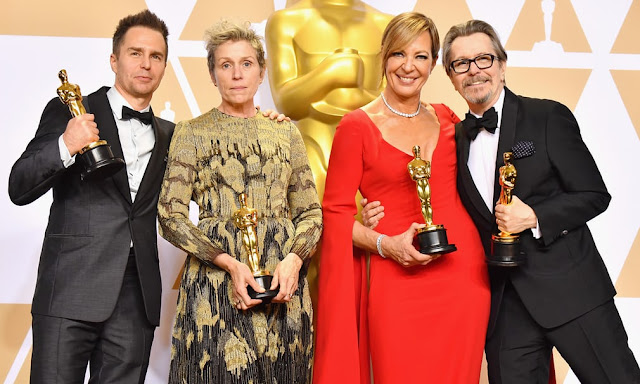 The acting class of 2018 including two sparring partners Outside Ebbing, Missouri. The most predictable batch of winners in recent years, but hey, no Casey Affleck or Emma Stone in sight, so not as objectionable as last year!

Hot dang! I should have put a bet down yesterday, because, bar the short film categories, I got every feature length film category bang on! Ohai, sick predictions! This is by far the best showing I’ve had since creating this blog at the age of 15, and, I have to say, it feels pretty satisfying!


Either I’m an Oscar prediction Nostradamus (read: absolute saddo who spends way too much time nerding out over frivolous things), or the Oscars this year were just hella predictable.

Given I was the only one on the ‘Oscar buzz’ Facebook group to score 21/21 on the feature length film categories, but someone else managed a very credible 19/21, the truth, I suspect, is probably somewhere in between. 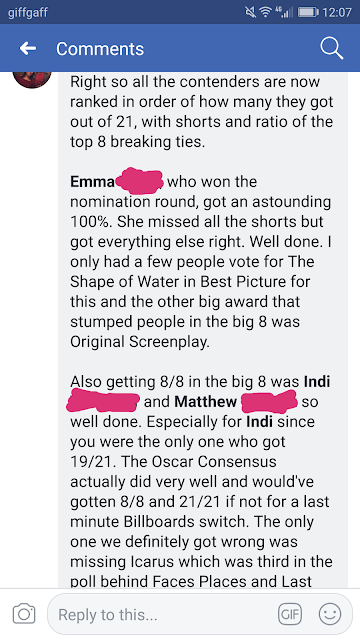 Ideally, I wanted Dunkirk to triumph over both films, but that was written off pretty early on, and of the two, I wanted The Shape of Water to win, as it did. It was a much less controversial win than Three Billboards, and, by winning, became the first Best Picture to have a female lead since Million Dollar Baby. 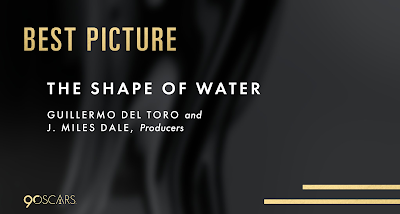 Dunkirk should have won. But The Shape of Water is lovely.

Crazily, this film, which is about a mute cleaning lady bonking a fish-man, features more representation than Kumail Nanjiani’s The Big Sick (where he barely masks his disdain for his fellow countrywomen as he throws south Asian women under the bus and makes laughing stocks of them, thus making this Asian viewer very uncomfortable).

Guillermo del Toro checking that the envelope did in fact say 'The Shape of Water' for Best Picture might be one of the cutest Oscar moments ever!

In terms of predicting the other categories which were on a knife edge (eg 'This Is Me' vs 'Remember Me' for Best Song, Get Out vs Three Billboards... for Original Screenplay), I went with the rather optimistic approach of backing the horse that I wanted to win. And crazily, in all of those categories, my preferred choice did win! 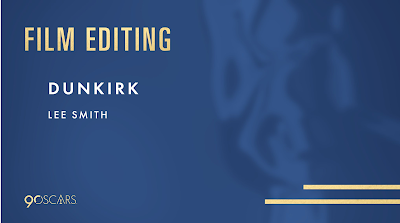 Thank God this beat Baby Driver! No thanks to BAFTA haha.

Of these hard-fought contests, my favourite was Lee Smith winning Best Editing for Dunkirk. He had previously been nominated for Master and Commander: The Far Side of the World and Christopher Nolan’s The Dark Knight.

In the lead-up to the ceremony, I had been very, very, worried that Baby Driver would steal Dunkirk’s Oscar here. (And, seeing as we’ve established that Nolan wasn’t getting Director and Zimmer wasn’t getting Score, I cherish every single award Dunkirk can get its hands on). Both Baby Driver and Dunkirk had tied for Best Editing at the Critics’ Choice Awards, yet, Baby Driver ominously won the BAFTA for Best Editing, so the contest was certainly close.

But, graciously, the right film won. The land, sea and air strands were linked so well in Dunkirk and the visceral dread of the movie could not have been attained had it not been edited so competently.

Dunkirk also won both Sound Editing and Sound Mixing. Richard King, sound editor of Dunkirk, also boasts Oscar wins with Nolan’s Inception and The Dark Knight, and Master and Commander, making him statistically the most successful sound editor in Oscar history.  And not for nothing. *Inception BRRRRRRRRRRM*

This meant that, numbers-wise, Dunkirk was the second biggest winner of the night after The Shape of Water. 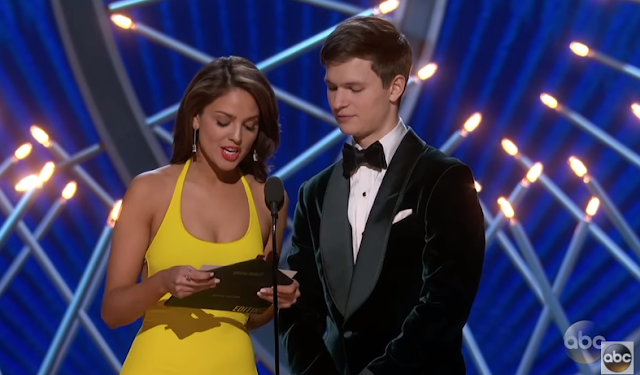 Weirdly, the producers of the show had Ansel Elgort and Eiza González, stars of Baby Driver, which was also up against Dunkirk in the two Sound categories, present the Sound awards. This made for the rather awkward situation of them announcing the winner of a film they obviously weren’t rooting for, twice.

Even weirder still, was Eiza González and Emma Watson, who’s films are nominated for tech awards, and various other hangers-on (Cara Delevingne’s ex-girlfriend St. Vincent was there) present at the ceremony, yet Fionn Whitehead, Aneurin Barnard, Barry Keoghan and Harry Styles, who only happened to star in a Best Picture nominee and multiple winner, weren’t? Why not have Cara Delevingne’s ex-boyfriend there as well?

I mean, the popstar/actress Zendaya was there, because the Oscar viewing numbers dwindle every year (that’s what happens when actors sermonise about politics in their speeches) and the show’s producers are always thirsty for younger viewers to tune in. They would have got a whole batch of viewers if they’d invited a certain former One Direction member! So I really don’t get why Harry et al were left out.

I was really pleased that The Shawshank Redemption cinematographer Roger Deakins finally won. You know what they say, fourteenth time’s a charm!

Because the prior ceremonies (BAFTA, Golden Globes, SAGs etc) had given a really good indication of who was gonna win, I didn’t entertain the chance of an upset in any of the locked up categories (thus I knew Oldman, McDormand, Rockwell and Janney were gonna win, and I didn't delude myself anything different would happen), and I was all the happier for it. This allowed me to focus my attention onto the categories which could go either way. 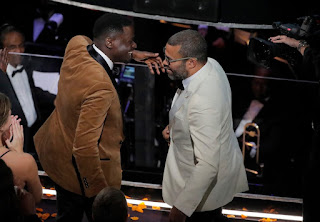 One such category was Get Out winning Best Original Screenplay. Three Billboards... had taken the BAFTA and the Golden Globe, but any cinemagoer worth their salt could tell you that Jordan Peele’s writing in his directorial debut was light years ahead of Martin McDonagh’s wishy-washy, plot-hole ridden racism apologism.

But due to Three Billboards...’ precursors, it was anyone’s guess who would win. I was over the moon when Jordan Peele’s name was announced!!! He hugged his missus (Brooklyn Nine Nine’s Chelsea Peretti) and gave a moving, humble speech. His sharp satire on the zeitgeist hit, blending horror, drama and comedy means Peele's win was one of the most deserved of the night. 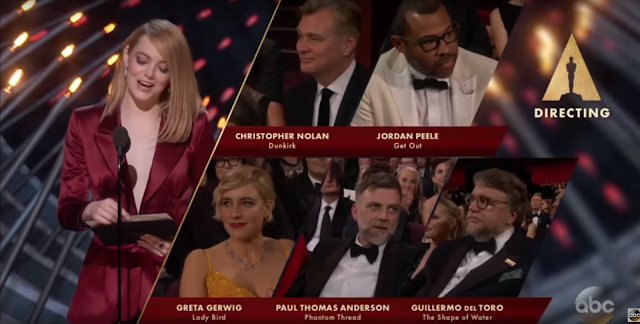 The only really jarring part of the night was when, prior to announcing Best Director, Emma Stone introduced the nominees as ‘these four men and Greta Gerwig’.

‘These four men’, including African-American Jordan Peele, who wrote and directed one of the most relevant and astute critiques of race committed to celluloid?

‘These four men’, including Mexican immigrant Guillermo del Toro, who’s winning film The Shape of Water featured not just a female lead, but a woman of colour in a prominent supporting role?

Both Get Out and The Shape of Water had a hell of a lot more diversity than Lady Bird. Or La La Land, which happened to be set in Los Angeles, one of the most diverse cities in the world yet seemed to be occupied solely of white people and John Legend, but you didn’t hear Ms. Yellowface saying anything about that, now did you?

Emma Stone’s thirst for a headline-grabbing one-liner got in the way of her analytical skills, because there is no doubt in my mind that Jordan Peele and GdT, despite their Y chromosome, have had to jump through a lot more hoops to arrive to their Oscar nominations than Greta Gerwig did. They deserved to be at the Oscars, and without their achievements being minimised to ‘oh they just got nominated because they’re men’. 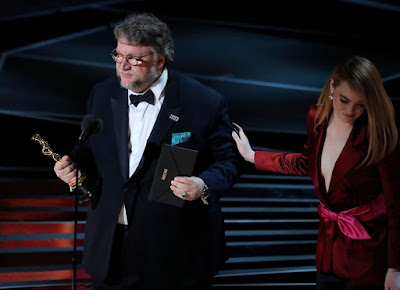 GdT’s acceptance speech attests to this. He said, poetically, ‘I am an immigrant … The greatest thing our industry does is to erase the lines in the sand and we should continue doing that even when the world tells us to make them deeper’.

The contrast between how he brought up his ‘other’-ness up as a manner of unifying rather dividing, with how Stone snarkily disregarded all the male directors as the same is very telling.

The other two male nominees, Paul Thomas Anderson and Christopher Nolan are white, admittedly (even if their styles of direction in Dunkirk and Phantom Thread couldn’t be more different). But, so is Damien Chazelle, who directed Bugeyes to an undeserved Oscar last year in La La Land, in doing so, winning the Oscar for Best Director himself. I didn’t see her whining about the winner being male then.

Emma Stone’s asinine comment was peak white feminism; white actresses only taking a superficial interest in social issues when it furthers their own cause.

If she purports to care about women so much, why did Stone casually poach a role from an Asian actress when she accepted the role of ‘Alison Ng’ (CLEARLY a non-Caucasian name) in Aloha?

Her trite, problematic one-liner rubbed me up the wrong way because it recalled Natalie Portman at the Golden Globes, when she said ‘and here are the all-male nominees’ when announcing Best Director.

The same Natalie Portman who has a production company, which has only produced one picture directed by a woman – her.

The discourse about women in Hollywood getting more directing gigs needs to be had, no question about that. But I’m not sure how Emma Stone and Natalie Portman making snide digs – both immediately prior to a Mexican director and thoroughly lovely guy having his moment – furthers their movement.

Perhaps Miss Aloha ought to look in the mirror being making tone-deaf wisecracks about male entitlement.

Of course, I’m not surprised. The words 'Hollywood' and 'hypocrisy' go hand in hand. Just like the words ‘Jennifer Lawrence’ and ‘drunk’ (she was in attendance yesterday, dressed like a stripper and falling about all over the place, sloshed out of her brain my theory is she drinks to suppress the memories of Harvey). 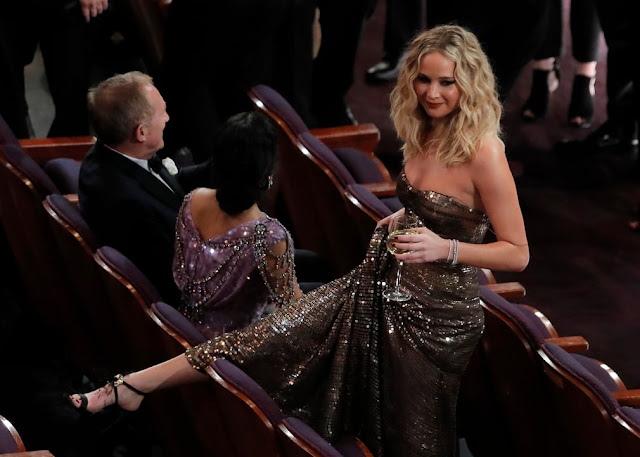 I guess you have to grab attention whichever ways you can when Red Sparrow is more like Dead Sparrow at the US Box Office.

But it’s a shame, because up until Yellowface Felicia started crapping all over these four men’s accomplishments (men who’s sole crime was to produce art that had entertained and moved audiences last year), it was a surprisingly tolerable Oscar ceremony, by far one of the most fun in years, both in terms of results and execution.

Oscars not bad, after all. 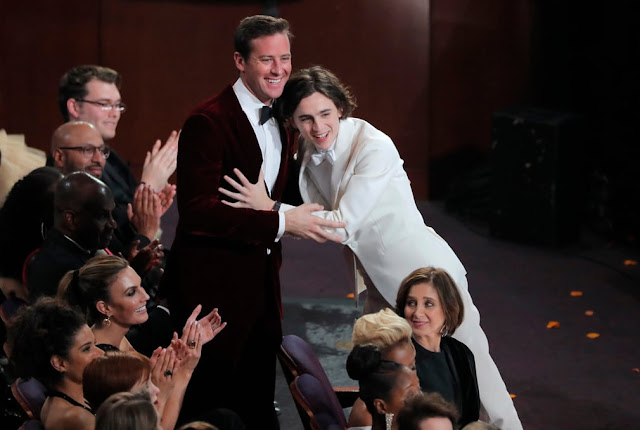 Hey David! I've got a few more titles to watch, and then I'm going to do a blog on my top 10 films of 2017, where I will be explaining my fascination with Christopher Nolan's masterpiece XD =)

Yes! Finally something about ambushlike.

Christopher Nolan is a best

I see most movies all the time on my list of modern films https://viooz4k.net that are scheduled to come out.