Obviously, fashion and looks are subjective, so this is by no means the gospel. And I'm not even gonna pretend that bias and love for certain performers (and disdain for others) did not creep until my rankings. I'm prone to playing favourites and being hella petty to those I dislike a la Miles Teller when he tweeted 'congratulations to Moonlight!'

The Dunkirk twinks Harry Styles and Fionn Whitehead weren't invited to the Oscars, but had they been, I'm sure they would have made the Best Dressed Males List.

So, without further ado... 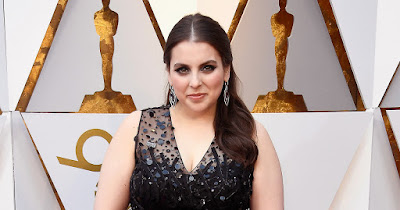 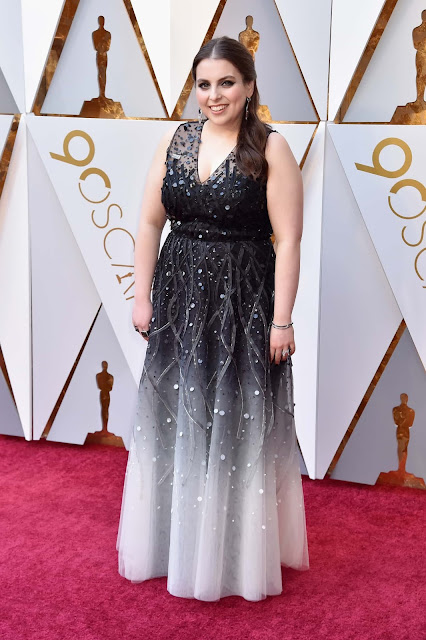 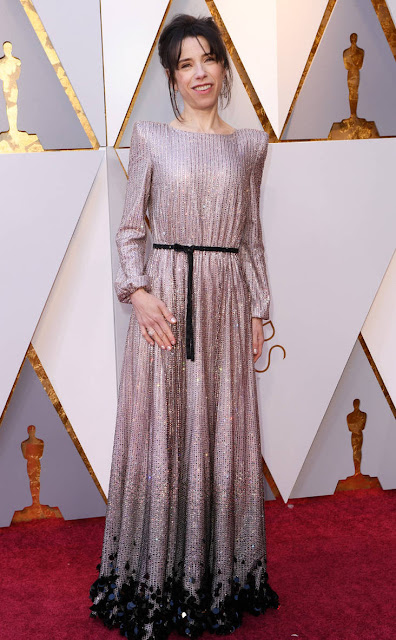 Isabelle Huppert wore Armani Privé last year, and this year, Privé continues the tradition of dressing my personal choice for Best Actresses! The angular shoulders recall Joan Crawford, and the cut of the dress is flattering to Sally's form, nicely nipped in with a waistbelt to give her some curves. The sparkles of the dress adds a touch of glamour to proceedings. 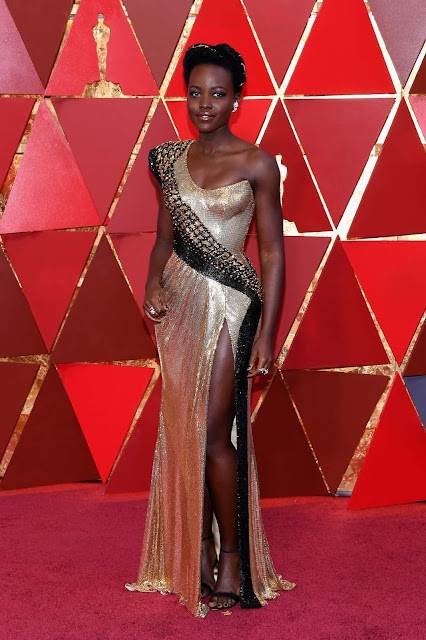 Wakanda forever! Lupita does her Black Panther alter-ego proud with this fierce Versace dress, which goes so well with her skin tone. The sash across it could pass for an ammunition belt, which recalls something Nakia would wear, and there's some gold detail in her hair to match the dress. 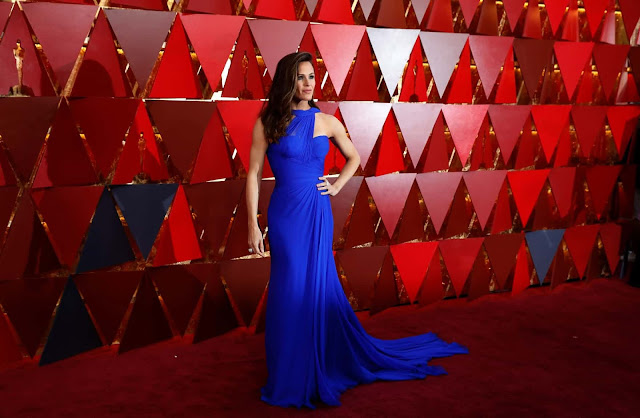 Jennifer Garner goes for simple but elegant in this classy, form-fitting electric blue gown. Her hair is styled nicely, and look how toned her arms are, too! Ben Affleck dun goofed. 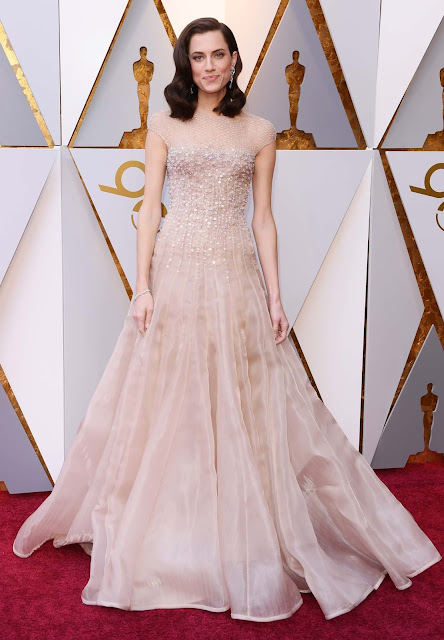 The Get Out actress looks so pretty and demure that you could definitely see why countless boyfriends would follow her to meet her parents, to their doom. The jewelled peach bodice is very flattering to her slim frame and the bottom of the dress sashays down regally. 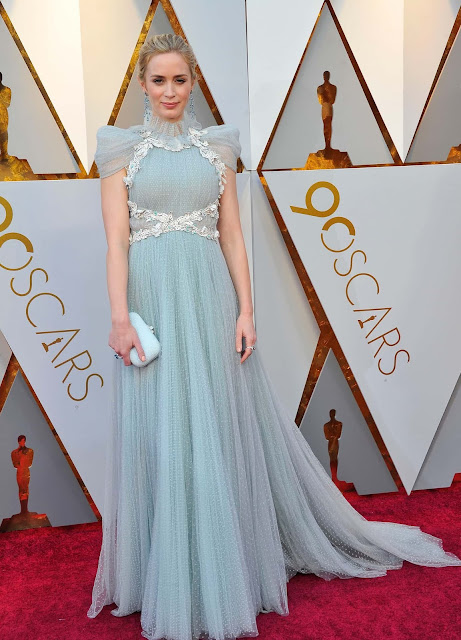 Like Sally Hawkins, Blunt goes for power-dressing in terms of the shoulders in a princess-style Schiaparelli dress. I love this colour on Emily, and she's accessorised fabulously as well with a matching clutch and dangly earrings. 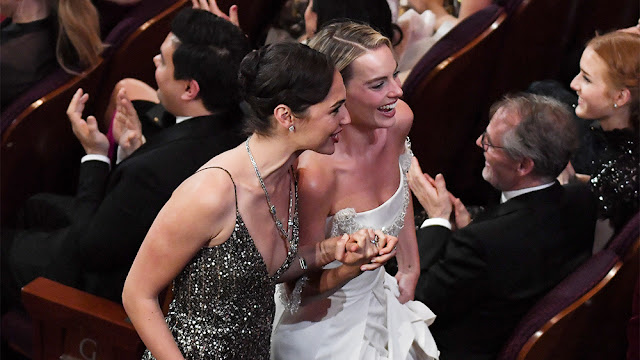 Somewhere, Zack Snyder is grinning from ear-to-ear about getting to work with a brunette and blonde bombshell in the DCEU movies (some, he produces, some, he directs). Gadot and Robbie are commonly considered to be two of the most beautiful women in the world, and on Sunday, they were the best dressed, too. 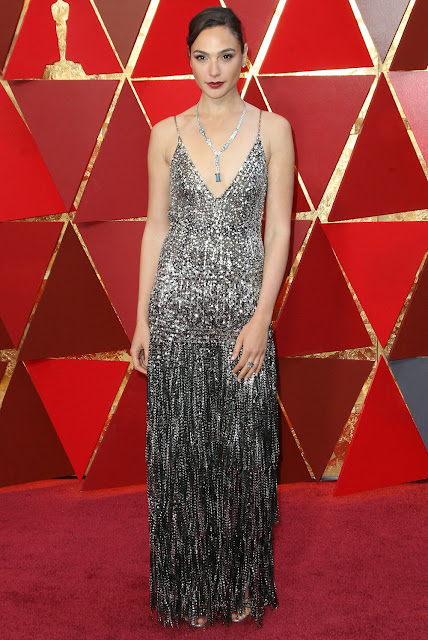 Gadot gives a nice hint of cleavage in a metallic dress, with statement jewellery that adds a pop of colour to her outfit (along with her red lips). Standing tall and proud, she looks every bit the Amazon goddess. 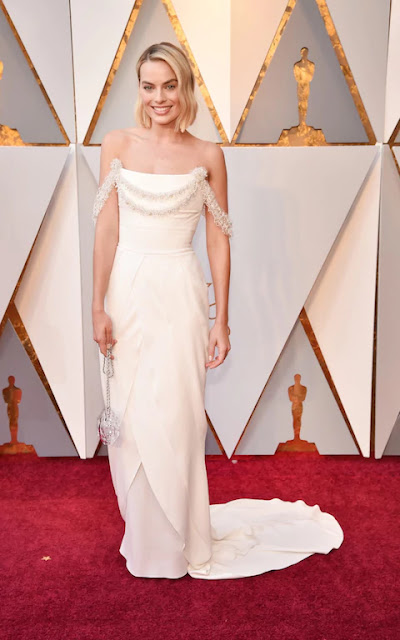 Margot Robbie looks like an angel in this Chanel dress. It had the potential of being a bit plain, but thanks to the detail on the top, a shimmery clutch and her hair and make-up on fleek, the ensemble works. Robbie seems to have gained a bit of a tan, which the whiteness of the dress highlights nicely.

So those were the women who I thought were the best dressed. Now, for the worst!


Frances McDormand was quite poorly turned out, but I'm not including her because we all know Frances would show up at the Oscars in her pyjamas if she was allowed (indeed, she did rock up to the Independent Spirit Awards the day before in her PJs!). Frances doesn't bother with her outfits, she cares more about her craft, and that in itself, deserves praise. 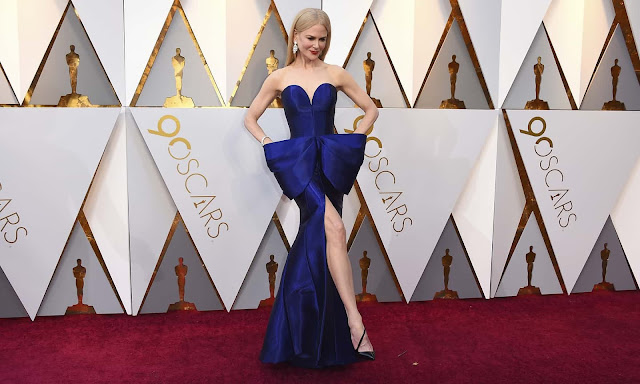 The bow at the front of this dress is just too much! 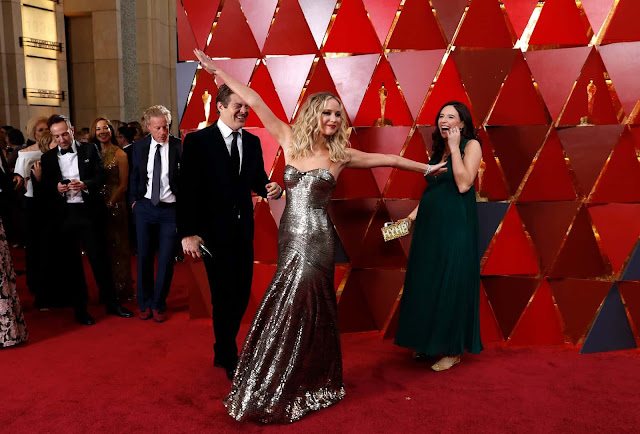 The tightness of the dress around the bust and the spaghetti strap are just a bit too 'stripper'ish an aesthetic for the Oscars, IMO. JLaw is also wearing way too much eye make-up, so much that you can barely see her eyes, and the tousled/wavy hair is, again, more suitable for a hen do than the Academy Awards. 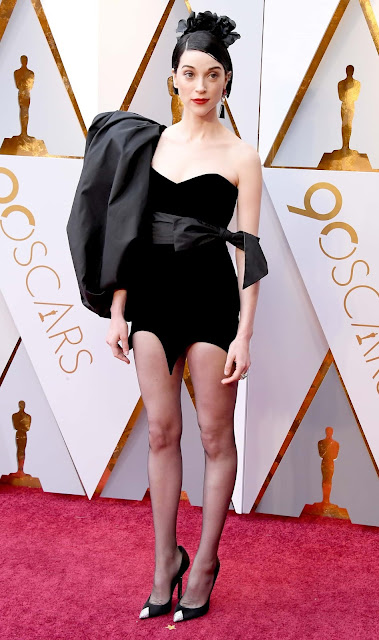 I know Cara Delevingne's ex-flame is known for her quirkiness, but this bizarre ensemble is better suited for one of her music videos than something as upmarket as the Oscars. Or maybe even like, a swimming pool? 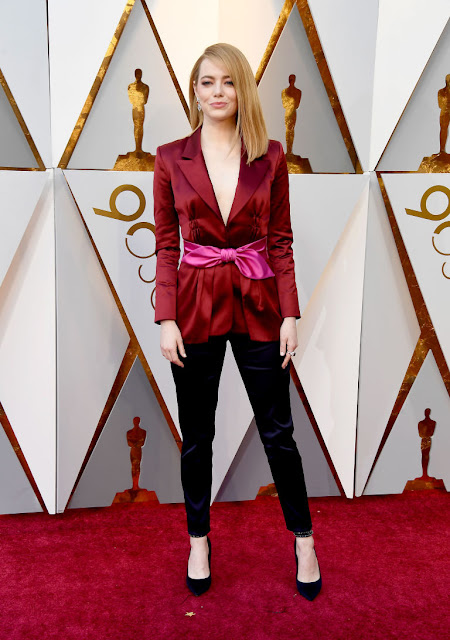 Emma Stone was so impeccably dressed last year, when there was an Oscar to campaign for. The aforementioned City of Stars dress at the Golden Globes, her sparkly BAFTA outfit and the gold dress she wore on Oscar night were all home runs. But this year, with Battle of the Sexes failing to gain any awards traction, there's less impressing to do, so I swear she just gets dressed in the dark? There's too much 'wet look' silk in this outfit, and the clash between the red and the pink is a real eyesore. Her stylist must low-key h8 her. 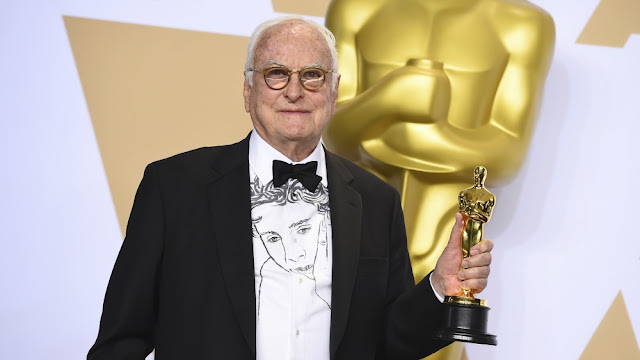 I love this. The movie veteran, who won on Sunday for Best Adapted Screenplay, wore a cartoon of the actor who delivered his lines on his T-shirt. Inspired! 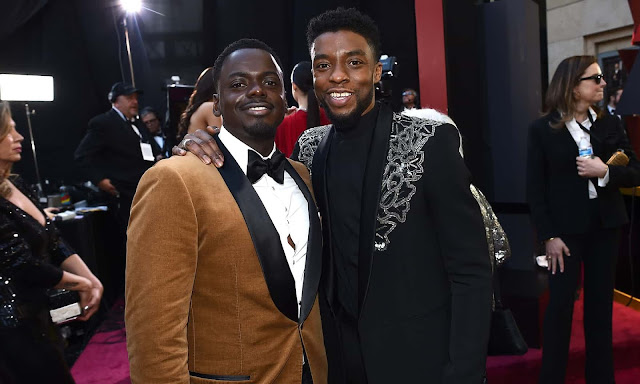 The bead detailing on the lapel here is so intricate and pretty, I daresay King T'Challa would approve! 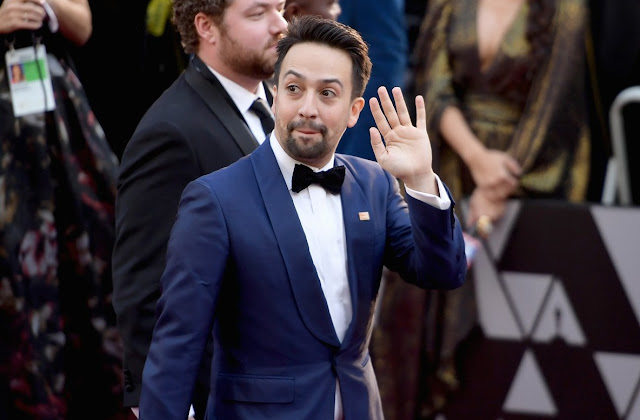 A simply navy suit and a bit of a goatee is a good look on the actor and song-writer. I daresay Alexander Hamilton himself would rate this look. 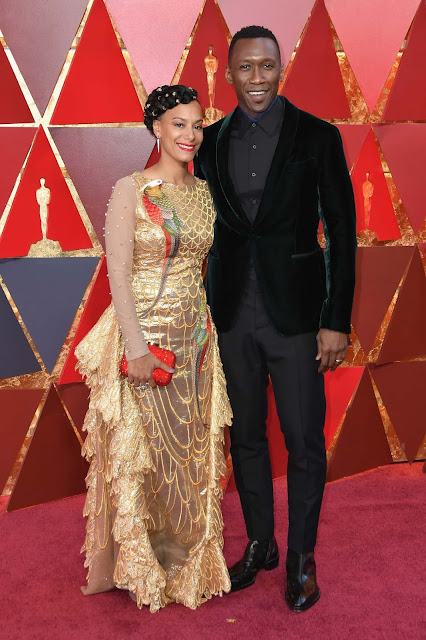 Quite a few men wore velvet on Sunday, which is brave, because it's much easier to get wrong than right. However, due to his height and wisely choosing to pair his Berlutti blazer with a plain black shirt, the Moonlight actor carries it off with aplomb. 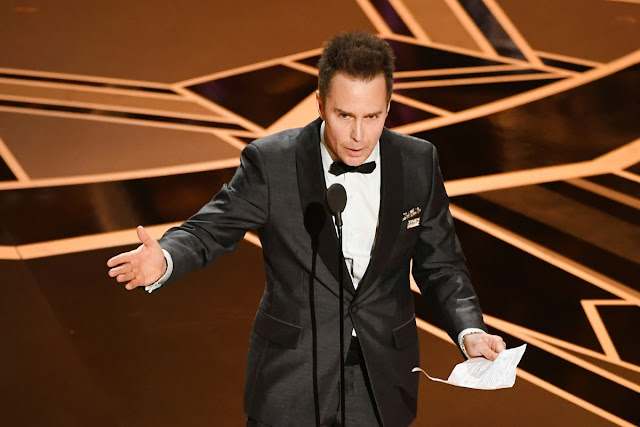 From last year's Best Supporting Actor to this year's! Sam Rockwell looks a world away from schlubby Officer Dixon and his untucked shirt. The bow tie is classy and cute and dapper Sam is also rock(well)ing just the tiniest hint of stubble. I do dig facial hair on brunette guys! 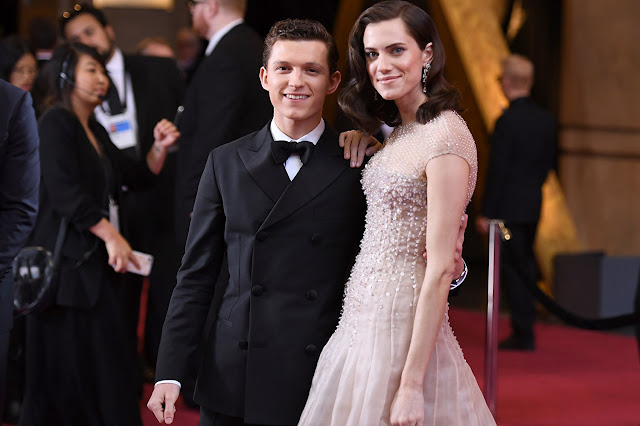 The young British actor looking very sharp in this Hermès double-breasted suit. Like something Daniel Day-Lewis in Phantom Thread might wear! I suspect Tom, with his perpetually cheery grin, is a bit more fun to be around! 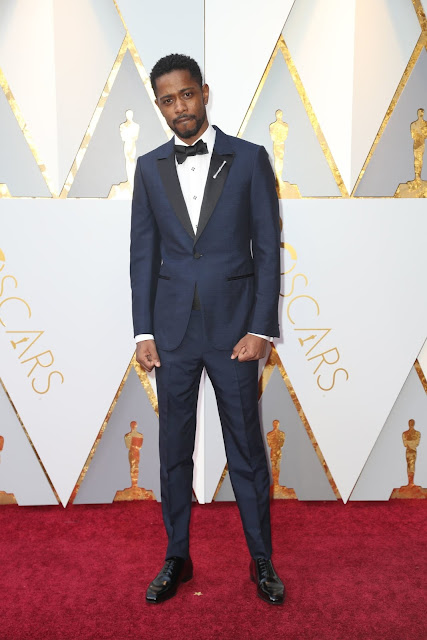 Hands down, the best dressed man of then night. The suit has been tailored to perfection, and the black lapels on the dark blue makes it stand out a bit. I also like the detailing on the buttons, his well-shined shoes and the suave bow tie. The fact that the suit is sustainable just makes it even better. Being eco-friendly never looked so good! 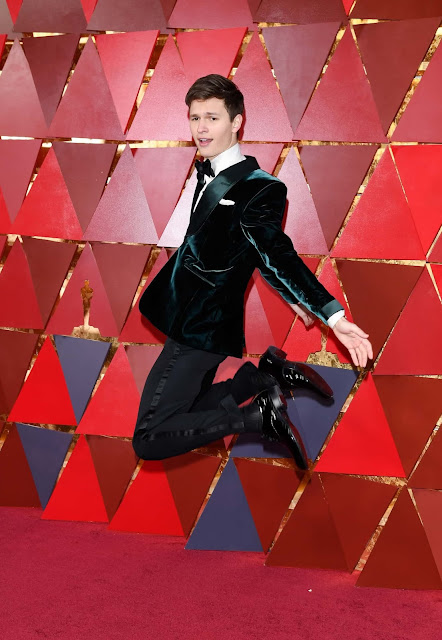 See what I mean about velvet being hard to pull off? The Baby Driver actor was already up against it in this green Tom Ford jacket, but what hurts my eyes almost as much as the fabric is that there seems to be a tracksuit-esque line down the side his trousers, which just makes the whole ensemble look kinda cheap. Harry Styles and Fionn Whitehead would never. 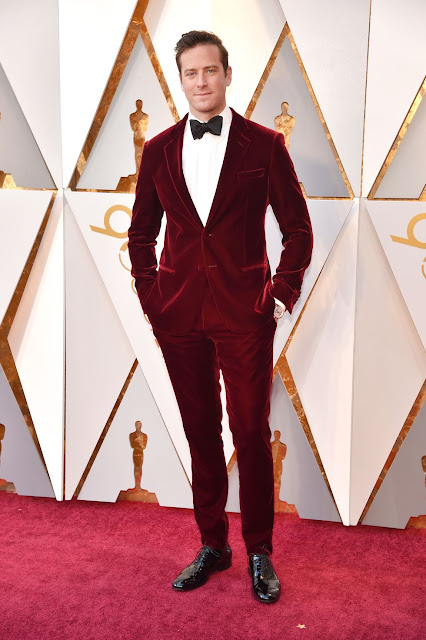 There's no denying Armie Hammer is very good looking (he's as handsome as he is obnoxious. Make of that what you will). But even the best-looking person in the world couldn't pull off this Armani burgundy velvet monstrosity. The material looks like one would make curtains out of it or something. 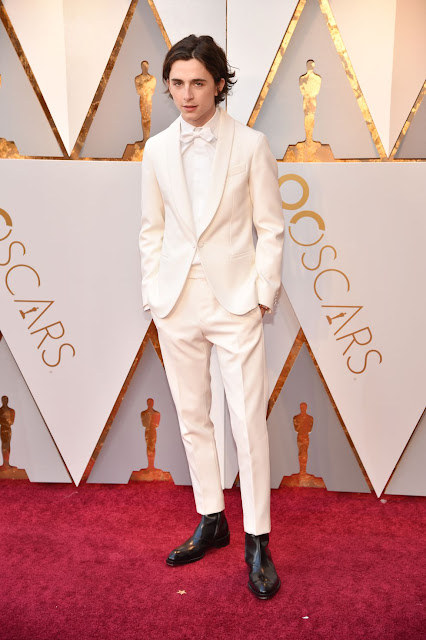 Timmy, honey. I love you. You're sick at the guitar and the piano and trilingual, not to mention the youngest actor in 80 years to get nominated in the Best Actor category.

But if Jamie Redknapp couldn't get away with a white suit, I'm afraid you won't either!

Mr Chalamet has had some... interesting fashion calls of late. At the Independent Spirit Awards, which is way more informal, he rocked up, presumably cosplaying a petrol station attendant: 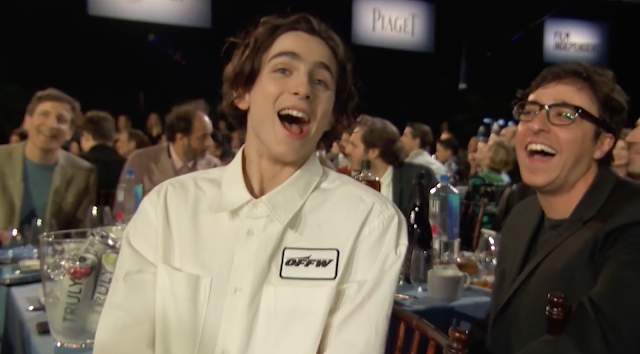 Thanks to my father who stated to me about this weblog, this blog
is actually amazing.

The approach I took is the identical with Zoolander.

I am sure this paragraph has touched all the internet
people, its really really nice paragraph on building up new web site.