I thought I'd post this list now, as I generally don't watch a film unless I think it's going to be 7/10 or more in terms of my enjoyment of it, thus, can't foresee me watching any other bad films (which usually contain the stinker performances) from this year. 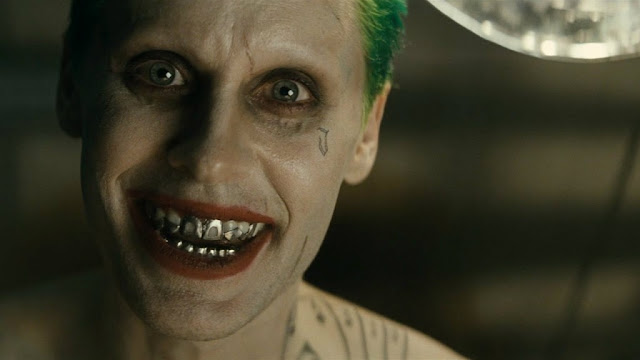 An annoying and laughable bastardisation of the Joker character (which in Heath Ledger's far more capable hands, was terrifying) where he plagiarised liberally from James Franco in Spring Breakers as well as the 'Mexican gangster' cliche. But the worst thing about Leto's interpretation of the Joker  were his obnoxious off-screen antics during filming, all in the name of being 'Method'. Viola Davis giving him the sideye at this press junket perfectly encapsulates my feelings towards his insufferable behaviour. The fact that Leto has an Oscar and Davis doesn't says a lot about how little that golden man is actually about meritocracy. 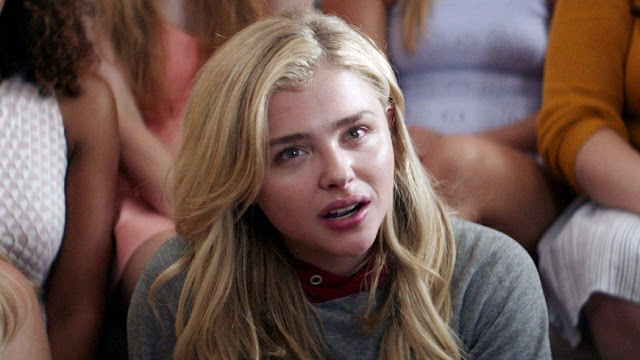 Slightly harsh, possibly, given that her performance was in line with the general (lack of) quality of the film, but someone as uptight and priggish as Chloë Grace Moretz (on Twitter, she's constantly purveying her whiny White Feminism causes) simply doesn't convince as a free-spirited, sassy college girl who enjoys partying and getting stoned. I can't see Chloë Grace Moretz enjoying any of those such things; going from her Twitter lectures, I don't believe that girl even enjoys life. Thus, regardless of how hard she tries as Morgan, I just can't buy it, because of her holier-than-thou baggage. 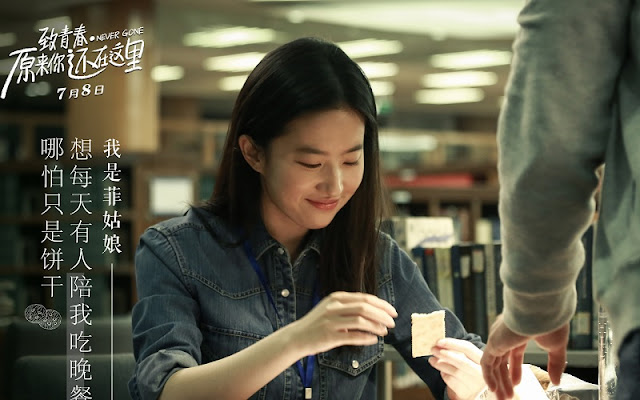 Not done any favours by the fact that she's playing a character some ten years younger than her actual age, Liu Yi Fei never fits the mould of naive schoolgirl falling in love for the first time. She and co-star Kris Wu (who's even worse than she is) generate zero chemistry. The lack of on-screen passion between the two actors was so palpable, in fact, that the British Board of Film Classification rated this generally harmless rom-com a 15 because they perceived all of the love scenes between these two as containing dubious consent. No, BBFC, their scenes together weren't rapey. They were just poorly acted.

Wooden AF. But I'll apportion a fair share of the blame to the director for this, too: she was obviously so busy juggling all the celebrity cameos in this overblown big-screen adaptation of a much-loved show, she forgot that part of her job was also to direct an inexperienced child actress into giving a semi-credible performance.

Usually a supremely watchable actor, Peter Sarsgaard sheds all of his charisma to give a masterclass in Phoning it In. His villain is extremely limp, and director Antoine Fuqua's attempts to humanise him as some ~tortured soul~ fall short thanks to Sarsgaard's muddled depiction, which results in a confusing and downright boring character. You don't fear any of his actions; I struggled to care when he toted a gun around.

Dishonourable mentions for other weak performances in this disappointing film go to Chris Pratt (missed this list by a whisker), Ethan Hawke and Denzel Washington. 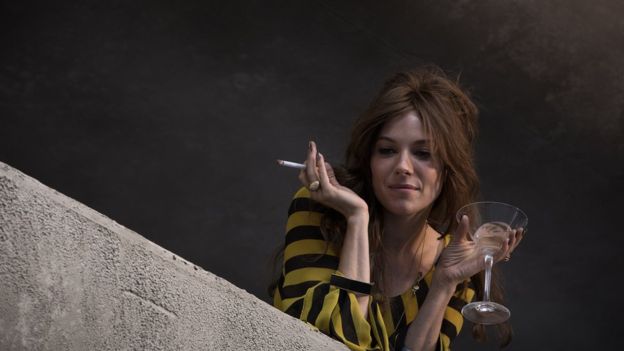 A superficial, one-note performance devoid of any depth, Sienna Miller in High-Rise is a glorified clothes horse who shows up to read the (unbearably pompous) script. Prancing around with a cigarette in one hand and a cocktail glass in the other, she doesn't even have to do any acting. After all, a flighty party girl who likes drinking and bed-hopping? Not exactly a stretch for her. 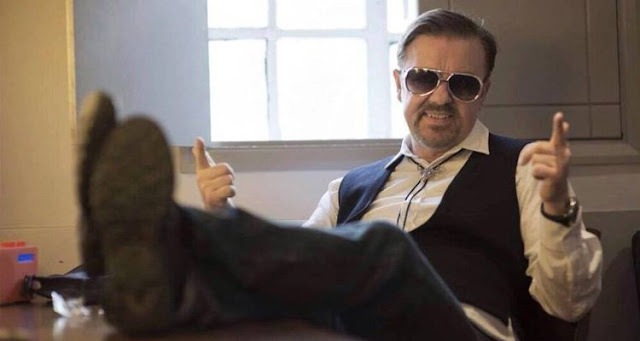 Speaking of actors playing themselves... David Brent: Life on the Road hinged on the audience laughing at, but ultimately empathising with a washed-up hasbeen with delusions of grandeur. Such is Gervais' monumental lack of self-awareness that the irony must have been lost on him how similar he is to the character he's playing.  Thus, I don't consider his portrayal of David Brent 'acting' when they're essentially the same reprehensible, smug, conceited person. 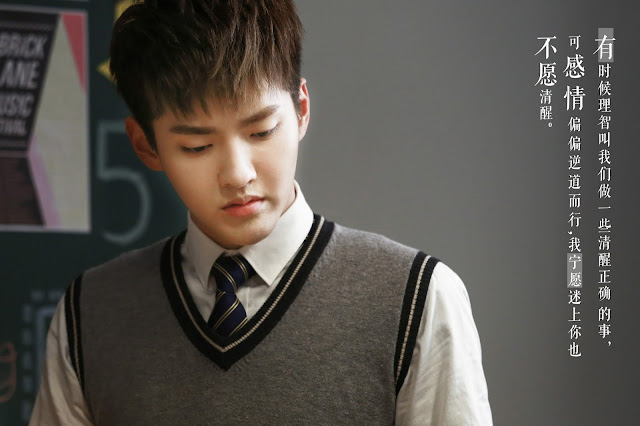 I actively avoided any films with Jennifer Lawrence in last year because I can't stand the woman, thus she doesn't feature on this 'Worst of' list (as she did last year, for Joy, in 2013, for American Hustle and 2012, for Silver Linings Playbook). Instead, I have Kris Wu in So Young 2: Never Gone, who gives a performance so screechy, hammy and over-the-top, it would do Jennifer proud. 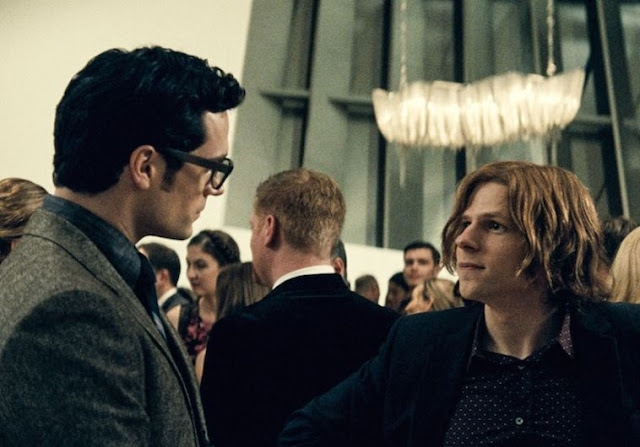 It gives me no joy to place Jesse on this list, and so high up, as I consider him one of my favourite actors. He is extremely versatile, traversing films roles that show he can do Machiavellian megalomaniac (The Social Network), neurotic and in over his head (Cafe Society), pitiable loner (The Double) and string-pulling strategist (Now You See Me). What can't he do? All of those things, at the same time, under the awful direction of Zack Snyder with an embarrassing script, who's end product is a Lex Luthor that is neither unsettling or imposing, just unbelievably irritating.

Oh, Blahra. It's a shame she didn't just stick to the day job, which I firmly believe is where her talent lies; I don't place uggos on my personal girl crush list. Because unfortunately, the skills that served her so well as a catwalk model do not transition so well on the big screen, especially in the role of the main villain in a much-anticipated DC blockbuster, which required the acting chops of a more substantial actress, not just some privileged upstart who's daddy bought her the role.

Particular lowlights of her performance as Dr. June Moone/Enchantress include her interpretation of being an archaeologist, which was to stumble around a tomb looking dazed and inept and then falling over, her stale scenes with love interest Joel Kinnaman (I literally cringed when Blahra delivered the 'aren't you going to kiss me now?' line, zero sex appeal), but most of all, the final showdown (pictured above), where Blahra flails her arms around, flares her nostrils and twerks, all in the name of being 'villainous'. The only thing scary about Enchantress was the fact that David Ayer cast her.

Still, there is one small mercy for Ms Delevingne: I listed her as my second worst acting performance in 2015 for Paper Towns, as even her lisping, insufferable protagonist wasn't quite as unwatchable as Eddie Redmayne's shameless Oscar-begging in The Danish Girl. This year, Cara's gone up in the world, to first place.

It's certainly the only kind of accolade for her acting she'll receive.

Because it needs to be done, Worst direction of 2016:
01. Zack Snyder, Batman v Superman
02. Ricky Gervais, David Brent: Life on the Road
03. Ben Wheatley, High-Rise
04. Tate Taylor, The Girl on the Train
05. Ben Falcone, The Boss

Thanks for steering me well away from 'David Brent: Life on the Road'!!

No problem Calvin! It's Vanity Project 101 from Ricky Gervais. And Lord knows that man is vain enough.