Were the identities of the presenters of Best Actor & Actress at the SAGs yesterday a tell?

I got three out of five on my SAG predictions, which isn't very good. I should have predicted Denzel, given SAG have never awarded him, and they must have been keen to set that right. However, I am delighted I got that wrong, because I don't want to see Creepy Affleck run away with the award.

Given Brie Larson's rightly frosty response at the Golden Globes when she had to read Affleck's name out and hand him the trophy, I was wondering if the mere fact that she even bothered to show up at the SAGs to honour her presenting duties (as with the Golden Globes and Oscars, last year's winner of Best Actress presents the award to Best Actor) was a slight giveaway as to the recipient of the award. I'm guessing that she didn't want to show up, knowing she'd probably have to present to The Perv, but then SAG told her that she needn't worry, because it wasn't going to The Perv, but a talented, humble, amazing actor instead, and thus, Brie showed up after all?

Leonardo DiCaprio's capital in Hollywood is higher than Brie Larson's, so he can afford to Bye Felicia these events if all he's doing is reading out the name of someone and handing them a blue statue. SAG's interesting choice for his replacement, his Wolf of Wall Street co-star Jonah Hill, also got me thinking if JH knew in advance who the winner was.

(Speaking of Jonah and SAG, remember when he took the SAG minimum wage of $60,000 for WoWS, just so he could work with Marty? I also love how he deputised for Leo at the SAGs like Donnie was Jordan's de facto stand-in in the film XD)

Jonah Hill starred opposite Emma Stone in her first film role, Superbad, where she played the object of his affections, and their reunion yesterday when he announced her name was totally adorable. He looked ecstatic for her, and the way he screamed 'Emma Stone La La Land' when he read it out was freaking adorable! 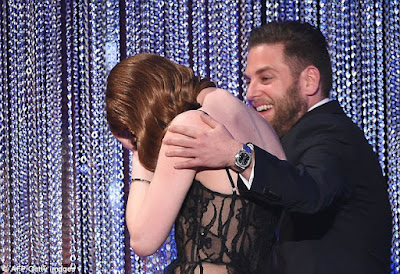 Even though I will never stop being salty about the yellowface thing, even I have to admit Emma Stone gave it her all in La La Land, and, acting-wise, at least, it was an irresistibly charming performance. She was by far the best thing about LLL, and never in her wildest dreams could prissy Emma Watson have given that performance. There were moments when I got lost in Stone’s massive eyes, Bambi's in size and sea-green in colour and her rendition of 'Audition (Here's to the Fools Who Dream)' was spectacular. Much worse performances have won the Best Actress Oscar (hi Jennifer Lawrence), so I've made my peace with her winning.

I'm pretty pleased with the SAG results yesterday, three of the four film acting awards going to people of colour is incredible!
Posted by Emma at 1/30/2017 03:52:00 pm