A labyrinth-style underground bar that features live jazz acts in Greenwich, this was my first time in seven months listening to live music, and the performers were so adept at their music that it definitely didn't disappoint.
The main lady singing (pictured below) had an amazingly strong voice, and she also gave the audience a brief introduction to each of the songs before singing them, in a way that was affable and informative, without her speeches seeming self-indulgent, as Daria van der Bercken's unfortunately were.

After a brief interlude, they changed the singer to one of the employees of the bar, who belted I'm Through with Love, a song immortalised by Marilyn Monroe in one of my all-time favourite films, Some Like It Hot. The girl who sang this couldn't have been more than 25, but she crooned the sultry lyrics with such a passionate, moody manner that it could have been an established songstress some years her senior. 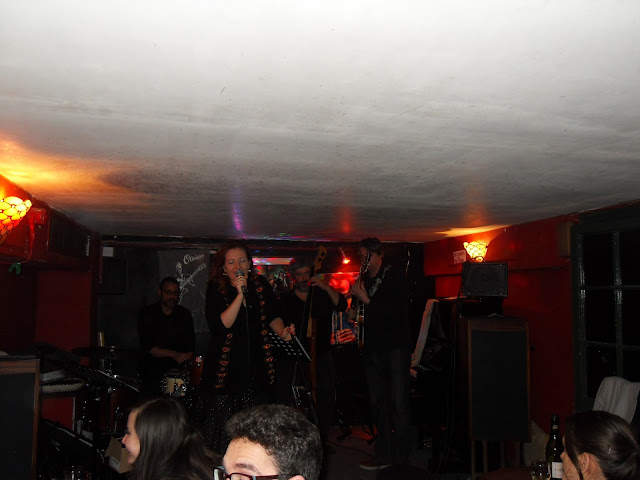 The instrumentalists accompanying the singers were technically strong, but more than that, they just got jazz. In the repertoire of songs played (a collection of Italian, Portuguese, Spanish and English language songs), there were several double bass, bass and drum solos, and, being a musician myself, I watched the three men caress their instruments with aplomb. The drummer, in particular, evoked Miles Teller in Whiplash.

My foibles with Oliver's Jazz Bar are related to the beverages rather than the music they played. The drinks on tap were too limited (just one beer), and the actual bar was in a room with a very low ceiling and dirty floors, which doesn't instil you with confidence when you first come in.

On the whole, though, it's worth persevering with Oliver's Jazz Bar despite its initial grubby impression. The music makes it worth it. I definitely want to start attending more jazz shows now!