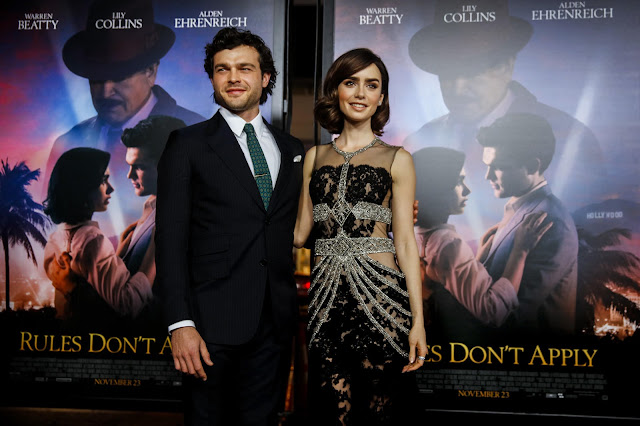 Warren Beatty's vanity project, Rules Don't Apply was released to lukewarm acclaim. I saw the trailer and immediately sensed the case of 'sticking as many celebrities in a film as possible to paper over the cracks of its low quality' and thought Nah. As far as I'm concerned, I'm content having seen just one film about Howard Hughes, Marty Scorsese's seminal The Aviator.

But even if I have no intention of watching a film, I still read its BBFC extended information, just to have some indication about the content in it (case in point, writing a whole blog post about Passengers' short insight as I have no life).

With regards to these 'moderate sex references', it said this:

Ahem at the bit about 'a small dark stain'. Given that the BBFC have rated the mere mention of ejaculation a 'strong sex reference' (see Fathers and Daughters), I thought this visual sex reference is a bit risqué for 12A!

Perhaps it sounds worse reading it than watching it, and the fact that it got PG-13 in the States and 12A in Ireland, imply that. Maybe it's a really tiny stain. But still. I'm very surprised the BBFC passed it at 12A, a rating which has less allowance for sex references than the American PG-13 (case in point, the likes of Mustang, Dumb and Dumber To and Easy A were PG-13 but (admittedly soft) 15s because their sex references were deemed too crude for 12A). The BBFC has no problem deviating from the Americans on this front, and I think they probably ought to have here.

For example, in Dumb and Dumber To, rated 15 for 'strong sex references', the sex jokes the BBFC thought inappropriate for 12A were when Jim Carey's not-too-bright character gets tricked by an old woman into fingering her. Obviously they don't show it, just his hand rummaging around under some sheets, and later he exclaims 'I just finger-banged an old lady!'. I agree with the BBFC that that is probably a bit dicey to put in a 12A. But personally, the sight of a stain on a dude's crotch, in my opinion, is even  more scabrous. In both cases, if watched with kids, the kid might innocently ask 'what's that stain on his trousers / what does finger-bang mean'?

It's good that the BBFC avoided the second awkward conversation between parents and some 9-year-old, but I'm not sure they'd relish having the first one either!

Then again, I haven't seen the film.

(I hope 'the small dark stain' in question doesn't appear on Alden Ehrenreich's trousers. I like him and don't want to see him make a buffoon of himself!)