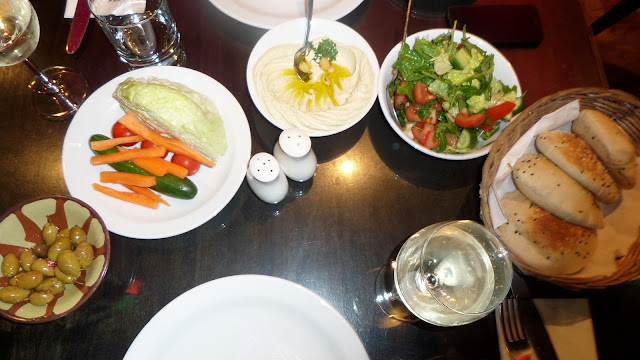 Beautifully decorated on the inside but a little out of the way, Yamal Alsham is a Lebanese place that specialises in mezze dishes. I visited using a Wowcher deal that I had bought for £29, which claimed to be worth up to £85 worth of food. Having. A. Laugh. Nothing against the food we ate, which filled our appetites and tasted good, but in no way would that ever be worth eighty quid. What we ate was worth £29, and not a penny more; the so-called “deal” off Wowcher promptly put the “sham” in “Alsham”.

Discluding the fact that any “deals” you buy off Wowcher, Groupon or LivingSocial isn’t a deal at all but just you forking out the price of the meal, then, and Yamal Alsham is still somewhere I’d recommend. The food, on the whole, was good (the spicy potatoes were my favourites, it’s my most enjoyed thing about Lebanese cuisine, and the houmous was some of the best I've had), although not all of it was brilliantly presented – the curdled cheese just looked like cheese gone off. The wine that came with the meal smelt, and tasted like Sainsbury’s £6 wine, and was promptly left untouched. It was very annoying to be short-changed in the manner that we were, and had we not bumped into former premier league footballer Pavel Pogrebnyak, sat on the table next to us, I would be much more severe in my grading of this place. As such, I’m trying to be nice. If it’s good enough for a footballer, it should be good enough for me.