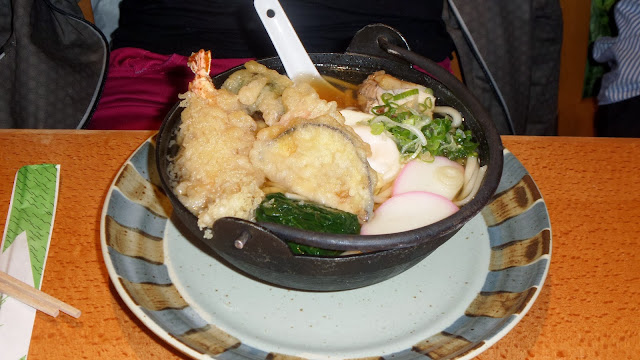 A cosy Japanese restaurant off Shaftesbury Avenue that graciously dabbles in more than just sushi, I went to Ten Ten Tei with eight of my coursemates to celebrate making it through term one (trust me, it was no cakewalk!). It was selected ahead of the neighbouring Kulu Kulu because when I called Kulu Kulu to book a table for us, they vaguely said they didn’t take bookings and that we could “just all show up”, which sounded a bit fishy to me. I like things that I’m certain of, and Ten Ten Tei’s keenness to actually find seats for us is what immediately put me in its good books.

The menu had a lot of variety, and between the nine of us we sampled six or seven different dishes, all proficiently cooked and presented. I’m a sucker for seafood, so I went for ten don. The prawns were absolutely brilliant; thick, juicy, generous slabs of the thing, and a big step up from Massala Hut, where I have a good mind to complain about false advertising, so meagre/non-existent were the prawn quantities.

However, the rice was a little tasteless, and as I’d been a little carried away when ordering and asked for the large portion, there was also quite a lot of rice to slog through. Thankfully, the complimentary soy sauce on our table made the task much less gruelling.

To drink, I had the plum wine. The quantity-to-price ratio of this left rather a lot to be desired - £4.90 for a teeny, tiny glass, but it did taste wonderful, and barely alcoholic at all. i don’t know about the concentration of the drink, but I was feeling merrily light-headed after my meal despite the small glass size, so, it must have been doing something right.

We got complimentary miso soup with all our meals, a nutritional, flavourful treat, and I washed it down eagerly, vegetables included. From the remaining meals ordered, I detected that the meat parts were all artfully present and well-cooked, but the noodles and rice excited me, and the respective orderers, less. However, that could be said of pretty much all restaurants, and for the good quality offered throughout, nice portions and tasty meals, overall, my impression of Ten Ten Tei was a positive one.