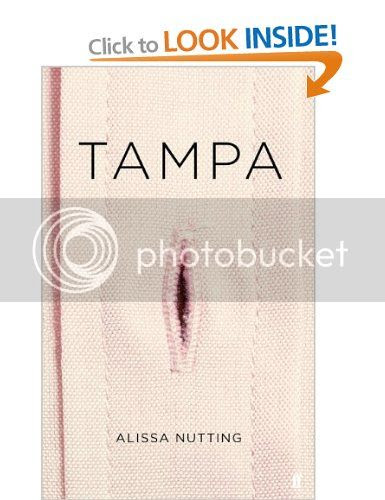 Celeste Price is a stunningly attractive, 26-year-old school teacher living in Florida. She is married to a good-looking man with a hefty trust fund who dotes on her, meaning that despite her teacher’s salary, she can drive about in a gorgeous red sports car. At her job, both the kids she teaches, colleagues and the parents of her students remark favourably on her looks. Life, then, sounds pretty sweet. Just one thing: she’s a massive paedophile, and nothing will do for her but a particular type of 14-year-old boy.

Tampa has been hailed as the female version of Lolita, and whilst Celeste does share attributes with Humbert – chiefly, their sexual aberration, the meticulous lengths at which they plan to ensnare their prey, being blessed in the looks department and thus having their pick of anyone normal aged should they desire it. But Tampa is an altogether different sort of book from the seminal Lolita. Whereas Lolita played with form and language to depict Humbert Humbert’s atrocities, Nutting leaves little to the imagination, vividly describing encounters with such fierce eroticism that you cannot but blush, especially when reading this book on public transport.

In fact, I would argue that Celeste is even more reprehensible than Lolita’s Humbert. Whilst he manipulated, bribed, blackmailed and used every tool in his arsenal to possess Dolly Haze, Nabokov was at pains to express that she herself, whilst definitely used and abused, was completely aware of the effect she has over men, and wasn’t afraid to use it.

Celeste’s chosen victim, an innocent-looking, slightly skinny boy with the double first-and-surname of Jack Patrick, is far more naïve than Dolores, deludedly believing himself to be more than just a fucktoy to his teacher, and they actually have a future together. In Lolita, you ended up despising both Humbert and Lolita, whereas in this book, it is much more black and white who the monster is. This, then, makes rooting for Celeste completely out of the question, and judging her, much easier.

Furthermore, by the end of the book, Humbert Humbert does at least gain the self-awareness to realise that his peculiar predilections ruined both his and Dolly’s life. We get no kind of self-realisation from Celeste, who actually in her mind fantasies that Jack had died, just so she can reach orgasm when masturbating. Unsurprisingly, it is only a matter of time before her rampant libido gets her found out, but even after a run-in with the authorities and the threat of jail time for her actions, she doesn’t learn her lesson, only becoming more sneaky in her conquests. She’s a real piece of work, and this is coming from me!

As you can probably tell from the book cover, the novel doesn’t skimp on sex scenes, and, whilst the sex is infinitely more realistic than anything in the 50 Shades of Grey novels, at points, even titillating (the reader will be disgusted at themselves for feeling this way, but trust me, they are), by the latter third of the book, you definitely sense that Nutting is trying a bit too hard to shock, as she ups the ante from the textbook 18-rated smut that you’ll find in any Mills and Boon novel, the altogether more deviant exploits. These don’t make for pleasant reading, and that she spends so much detail on anatomical after-effects of the screwing is definitely something I could have done without.

Still, it’s an extremely dark read – I chuckled to myself at various points, particularly at how Celeste dupes her adoring husband with lies upon lies, not to mention the odd bit of self-medicating to make having sex with him bearable.

Another quality she shares with Humbert is her mordant, amoral wit. Later on, she actually half-dates Jack’s father (parallels of when Humbert tolerated Lolita’s annoying mother Charlotte), just as a ruse to allow her to spend more time in his house, and whilst the heartless way she leads him on isn’t altogether pleasant, there’s a cruel comedy to be taken from such a sexist pig getting his comeuppance.

Ultimately, I don’t feel this book justifies its “female Lolita” reputation, but it is still an entertaining, well-paced, black-as-the-night story. It’s also extremely disturbing, and the most morally dubious thing I’ve read for years. Its ultimate downfall, however, is the uneven tone; it is unable to decide whether it truly wants to challenge the reader, or to turn them on. I can’t say I liked Tampa, but I definitely paid attention to it.

Excellent blog you’ve got here.It’s difficult to find high-quality writing like yours nowadays. I really appreciate individuals like you! Take care!! Please check out my site.
Adult swim lessons

Wow! This book blew me away and made me extremely uncomfortable. Alissa Nutting gives the reader a long look in side the twisted mind of a female pedophile. I was shaking my head and turning pages as quickly as possible to find out what would happen.
great deals Paver Contractor information