I had a completely new dining experience on Monday evening in Inamo, a fusion Asian restaurant where the tables have a touchpad on the side, and the table itself serves as a giant screen. From this, you can order food using technology rather than hailing a waiter and omit that awkward small talk. In addition to this, you can choose the “ambience” to be projected onto the table, whether it be photos of palm trees or a pattern, as well as play games whilst waiting for your order, be it alone, or with others. 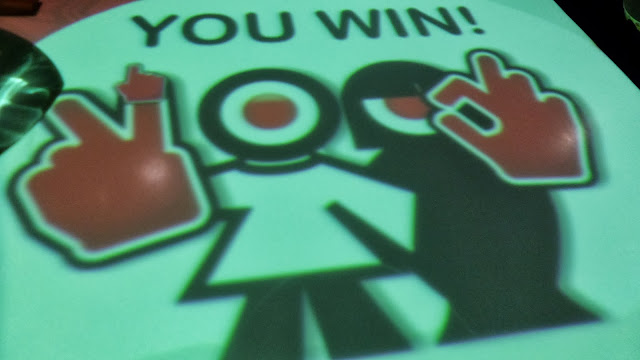 So far, so innovative. Credit to the creators behind this idea, the novelty of it definitely didn’t wear off on me throughout my stay at Inamo, and I would have happily spent even more time exploring all the functions of the interactive table. But my chief reason for attending restaurants has and always will be for the food, and the prices and quantities at this place were nothing short of exorbitant.

For starters, we had three dumplings, which cost £5.75, but they were so small, that you could easily have chomped all three in one bite. Don’t get me wrong, it was wonderfully presented, the sauce was fantastic and the dumpling itself didn’t taste bad either, but nearly six pounds for what was essentially the ingredients of ONE decent sized dumpling, spread out over three, was taking liberties.

The mains weren’t much better. The Nigri set was £13.75, and as you can see from the photo, it wasn’t anything more than just eight pieces of Sushi. From a supermarket, you could have gotten that for about £4, and even in Wasabi, this would have clocked in less than £7 and tasted just as good. So that was disappointing. The Berkshire Pork Neck - the highlight of my dining experience at Inamo -  fulfilled expectations better. Again, quantities weren’t great (the cooks sneakily disguised the meat under layers of sauce, giving the appearance of there being more than was actually there), but from the rich taste, you sensed that some thought had actually gone into the inception and preparation of the meal. I don’t usually like pork, but in the blend of spicy chocolate sauce, red wine reduction & crushed wasabi peas sauce that came with it, it tasted wonderful.

The dessert was a strange one. Three different flavours of homemade ice cream was served, to varying degrees of success. They tasted more organic, and thus healthy than that you might get elsewhere, but one of them was far too tangy for my palate, and as such, I couldn’t eat too much of it. The spongy texture also gave me an ill-feeling that it was soap, and not something edible, that I was tucking into.

All this left me unsure of where I stood on Inamo. I did have a great time there, but that was mainly down to the child-like glee the table bought out in me. The food, however, left a lot to be desired. Only the Pork Neck actually satiated my appetite; the others, whilst intricately displayed, left me thoroughly disenchanted, not least because there was just so goddamn little of it there. Perhaps if they’d spent less time fussing on the technology and took a bit more time thinking about feeding their clientele, I’d actually want to go back there.