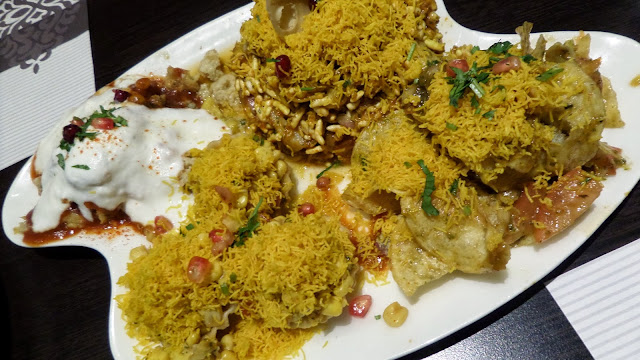 After work a few Wednesdays ago, me and the girls went for a much-needed catch-up in Wembley. I didn’t actually realise that the place we were going to was purely vegetarian, but so well-cooked were the meals that by the time you pay the bill, you don’t even feel that meat was lacking in the dish at all. And, considering what an unadulterated carnivore I am, that’s some feat.

The starters dish, the chaat platter, was probably the most conventional of all the dishes we ordered, a well-balanced mix of carb and sauces, a bit like a more authentic version of poppadoms and their dips. I couldn't help making a mess when eating, but, in my defence, when the food's that good, I'm desperate to get it down me as soon as possible, at the cost of common decorum!

Our colleague ordered that was far too spicy for two of us, but as a compromise we picked the other two, of which one was Indian cottage cheese mix, which I adored. That said, even that was a bit spicy for me, and I had to indulge in a yoghurt drink, twice, to quench the thirst that eating the hot food bought. We were all thoroughly stuffed by the end (with rice to spare), and shelled just £15 each. I was thoroughly satisfied with both of the dishes pictured below - both were textured, appetising, well-cooked and moreish.

Kailash Parbat is, in my opinion, the best Indian restaurant in Wembley. Of course, that statement would be rendered somewhat redundant if you consider that it’s also the only Indian restaurant I’ve been to in Wembley. But despite the lack of competition, what cannot be denied is that this was a great place (terrific portions, unobtrusive service [ironically, this is one of the few places in London that I'd deem worthy of a tip, and paradoxically, one of the few that doesn't help itself to a tip] and delicious dishes), and will certainly take some beating.
Grade: A
Posted by Emma at 10/26/2013 12:20:00 pm