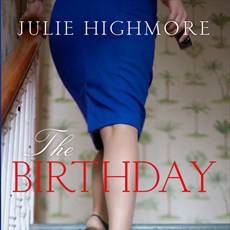 "The Birthday" follows a family consisting of Emily, the daughter, Ben, the son, and mother Fran and father Duncan as they gather for Fran’s 60th birthday. Each family member has skeletons in their closest: from Emily’s clandestine affair with the urbane Iranian Hadi, to Ben battling depression after the recession leaves him jobless, and his coping with it by popping pills, to Duncan’s life-long paramour, who also happens to have born him two other children. They’ve done a good job keeping the secrets from each other for the time being, but if the various other books I’ve read have taught me anything, it’s that in novels, these secrets have a way of all coming out at the same time, in an awfully dramatic crescendo.

Julie Highmore is a writer who has been praised for the way she presents life’s dilemmas without judgement or condemnation, and that’s certainly one of the best things about “The Birthday”. Obviously, none of the protagonists of the book are saints, and a different outlet (say, the moral guardians of The Guardian) would have written them off as charlatans immediately. But then it would be a boring book, reading about a bunch of “bad people” who we don’t care about. It’s to Highmore’s credit, that she writes about Emily’s affair and actually makes it sound intellectual and emotionally stimulating, rather than just a quick fuck, and Ben’s drug addiction problem is both terrifying, yet in its own mordant way, funny. This book is not a cautionary tale against having affairs or taking drugs, and for not partronising its audience, I respect it hugely.

The biggest shortfall of the novel is that it’s all a bit convenient that all the secrets manage to come to a head on one dramatic evening; in reality, they all would have come out much sooner. Nevertheless, it is a work of fiction, so I’ll suspend disbelief temporarily. On the whole, it’s a very engrossing novel, and I particularly like the way Highmore meshes the past with the present, giving the accounts of how Fran and Duncan met, as well as how they came across the other loves in their lives, respectively. The attention to the minutiae is also commendable – Emily’s husband, Alex, works for a fine wine company that doesn’t make much use of his Art History MA, but they hired him because they “liked the sound of hiring someone with an MA.” Now that IS realistic.

“The Birthday” is not supposed to be some kind of emotional odyssey, and for that, I was not particularly attached to any of the characters. I wanted to know how the story ended, but only for the sake of drama. There was no particular character that I was really rooting for, and whilst that meant, I too, shared Highmore’s dethatched look at their extramarital affairs, it also meant I wasn’t terribly emotionally invested in the book. Thus, whilst it was a very well-written, rich, entertaining read, at the end of the day, this isn’t a novel that will linger in my memory for long.

They’ve done a good job keeping the secrets from each other for the time being, but if the various other books I’ve read have taught me anything, it’s that in novels, these secrets have a way of all coming out at the same time, in an awfully dramatic crescendo. essay writing service jobs