This blog is rated 15 for strong sex references.

Every year, I like to analyse the BBFC short insight for a film, before I’ve even seen it. Last year, I nerded out to the BBFCinsight for Dunkirk, as it was an unprecedented case of four different adjectives for each of its classification issues.

The year before, I was excited because Suicide Squad got a 15, which is really unusual for a big studio superhero movie. Funnily enough, Suicide Squad’s short insight is actually subsumed in Dunkirk’s, ‘sustained threat, intense sequences, moderate violence, strong language’, yet Dunkirk is a rating lower.

Tangential, but Dunkirk has Harry Styles (a singer-turned-actor) and Suicide Squad has Cara Delevingne (a model-turned-cocaine addict). They used to ‘date’ each other. I daresay one was substantially more successful at acting than the other. 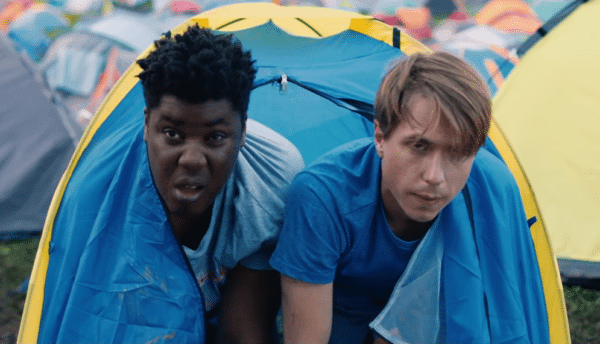 2018’s bout of ‘Emma critiquing the BBFCinsight of a film having not even seen the movie’ comes for the upcoming The Festival. For this film, Iain Morris and Damon Beesley, the creators of The Inbetweeners, collaborate again, as director and producers, respectively.


The lead actor in the film, Joe Thomas, pictured above, played Simon in The Inbetweeners, and was also in White Gold, a BBC show about window salesmen that Damon Beesley created. Thus, were I a betting woman, I’d wager that Thomas is Morris and Beesley’s favourite cast member.

The Inbetweeners is one of my all-time favourite shows. It has so many iconic lines/scenes, the cringe comedy is off the scale, and Joe Thomas (who plied his trade doing comedy sketches at Cambridge Footlights) was brilliant in the show. Thus, normally, I’d be buzzing for The Festival.

However, the BBFC dropped their rating for The Festival (a 15), and the page contained this depressing bit of information:

During post-production, the distributor sought and was given advice on how to secure the desired classification. Following this advice, certain changes were made prior to submission

This film was originally seen for advice. The company was advised the film was likely to be classified 18 but that their preferred 15 could be achieved by making reductions to three sequences of crude and sexual behaviour. When the film was submitted for formal classification acceptable reductions has been made the film was classified 15.

As a cinemagoer well over the age of 18, it is so annoying when a film gets snipped just to ascertain the more financially viable 15 certificate! The first two Inbetweeners films also underwent the same treatment, even though the end product, the 15 rated films, are still arguably ruder than the TV show, which is rated 18.

Back in 2011, when the BBFC used to elucidate more on what content was cut, they explained the four scenes that had to be trimmed for the first Inbetweeners film in order to get a 15. It makes for, er, stark, reading:

THE INBETWEENERS MOVIE was originally seen by the BBFC in an unfinished version. The company was informed that the film was likely to receive an '18' classification but the preferred '15' classification could be achieved by making cuts in four scenes. These were to remove an aggressive use of very strong language, to remove a particularly crude verbal sex reference (to urolagnia), and to reduce the explicitness of two scenes of sexual activity (one of self-fellatio and one of masturbation). When the completed version of the film was submitted, the aggressive use of very strong language had been redubbed, the crude verbal sex reference had been removed, and the strong scenes of sexual activity had been reduced, by a mixture of cutting and reframing. The film was therefore classified '15' without further cuts.

I did some further research into that scene of self-fellatio, as it seemed like something Jay would do. But it turned out to be a dancer in a nightclub they were in.

This issue of movies getting cut in order to secure a 15 rating is particularly contentious at the moment, as the eagerly awaited Equalizer sequel, sadly unimaginatively titled The Equalizer 2 rather than The Sequalizer, also out next Friday, was also cut:

This film was originally seen for advice at which stage the company was informed it was likely to be classified 18 uncut but that their preferred 15 classification could be achieved by making reductions to scenes of strong violence and gore. When the film was submitted for formal classification these scenes had been acceptably reduced.

The number of films getting classified 18 is dwindling every year. Studios are selling out, and dialling down on the most adult content in their films. In The Festival’s case, this is a shame, because it was the crude, no-holds-barred comedy of The Inbetweeners that made it so entertaining in the first place.

The other thing that caught my eye about The Festival’s rating was that, after it had sacrificed artistic integrity for money underwent the cuts the BBFC demanded, the BBFCinsight was rather unusual:

What’s interesting about this is, in my many years of poring over BBFCinsights, I’ve tended to notice that ‘sex references’ and ‘sex’ get placed next to each other when it comes to listing classification issues, for the obvious reason that the two issues often mesh.

For a more highbrow choice, the 2017 Oscar-winner for Best Picture (thank God it beat that La La Land ballacks!), Moonlight:

Sidebar: Ashton Sanders, who played the teenage ‘Chiron’ in Moonlight, is in The Equalizer 2, and because of him, I was tempted to check it out. But then I heard the BBFC hacked it to pieces for the 15 and I was like no, not gonna be any part of that.

This custom is also the case in lower-rated films. For the 12A-rated Miss You Already:

For another 12A-rated film, the dreadful I Feel Pretty:

So it is really jarring to the eye to see ‘crude humour’ separating ‘strong sex references’ and ‘sex’. My supposition why it happened is because 1) having read the BBFC information, the crude humour definitely conflates with the strong sex references, so it makes sense to put those two next to each other, and 2) one doesn’t begin a list of 5 15-rated reasons with ‘crude humour’. It’d be too silly.

The BBFC could have gone with ‘strong sex, sex references, crude humour…’, but that down-plays the crude humour’s influence on the rating, and, given that the crude scenes were what needed to be cut to preclude the film from getting rated 18, I’m willing to guess they were a big part of the rating reason.

(Also because I’ve seen The Inbetweeners, a show which could be summarised in one word as ‘crude’, aha).

On a final note about the ratings of Damon Beesley’s collaborations with Joe Thomas, White Gold  (which also has James Buckley, the actor who plays Jay in The Inbetweeners - pictured above) is an 18. Of the six episodes in series 1, only one episode was an 18, and for the most unimaginative 18-reason: six usages of the c-word spread out in a relatively short, 28-minute-episode.

(I made my brother count the c-words. I’m training Tom to turn into a BBFC nerd like me; before every episode of Black Mirror we watch together, I tell him the BBFCinsight and ask him to identify the category-defining issues when they come up in the episode. Ahahaha).

This 18-rating was completely uncontested, and the c-words weren’t cut out, or re-dubbed, like in the first Inbetweeners film, to get a 15.

This shows that when it comes to film vs TV, producers are much less fussed if TV shows get the dreaded 18.

Unbelievably fortuitously to the timing of this blog, I saw Joe Thomas a week ago!! He walked into Tesco Barbican, but he had a face like thunder so I knew better than to ask him for a picture (like I did with Per Mertesacker and David James).

Whilst I respected his wishes not to ask for a picture with him, that didn’t stop me getting a picture of him: 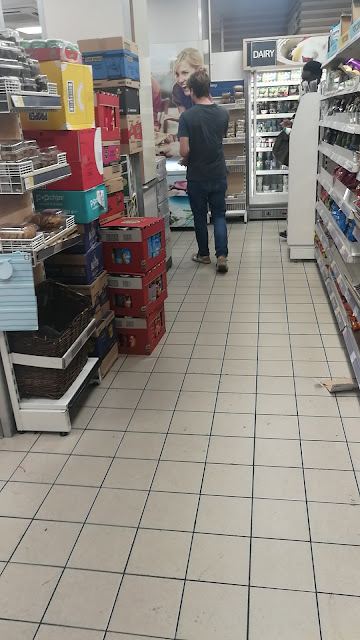 I probably should have read the situation and not taken a photo at all, but in my defence, I bloody love The Inbetweeners, and Simon Bird and Joe Thomas (aka the two Cambridge alumni) are my favourites in it. Simon Bird is the only Inbetweeners actor who I’ve placed in one of my favourite performances of the year lists, and Joe Thomas is the only Inbetweeners actor I’ve had on one of my yearly hotties lists!

Which, given the hapless characters they play, is quite the compliment!

I really enjoyed writing this blog, as it enabled me to talk about two of my favourite topics: The Inbetweeners and the BBFC, whilst casually throwing shade at Blahra Delevingne. For more film classification dissections, click here.
Posted by Emma at 8/08/2018 06:21:00 pm

Thanks for sharing your info. I truly appreciate your efforts and I am waiting for your next write ups
thanks once again.

When someone writes an post he/she retains the idea of a user in his/her
brain that how a user can be aware of it. So that's why this paragraph is amazing.
Thanks!

I've been reading your blog and I'm really impressed by the level of BBFC geekery - I used to be obsessed with them when I was younger and I'm kind of rekindling my obsession now. Did/do you go to Cambridge?

Thanks for reading! Always happy to meet someone else with an interest in film ratings, as I have loads of BBFC-related content on my blog, haha!

I see why you would infer that, given I said I liked the two Inbetweeners lads who went to cambridge the most, haha. Sadly I did not - I went to Bath.

Howdy! This blog post couldn’t be written any better!
Looking at this article reminds me of my previous roommate!

He constantly kept talking about this. I will forward this article to
him. Pretty sure he’ll have a very good read.
Thanks for sharing! Whoa! This blog looks just like my old one!
It's on a totally different subject but it has pretty much the same layout and design. Wonderful choice of
colors! I love what you guys are usually up too.
This sort of clever work and exposure! Keep up the terrific works guys I've included you guys to my
personal blogroll. http://www.cspan.net

Simply wish to say your article is as astonishing. The clearness in your
post is simply cool and i could assume you are an expert on this subject.
Well with your permission let me to grab your feed to keep up to date with forthcoming post.

Thanks a million and please keep up the gratifying
work.

I'm really inspired along with your writing skills and also with the structure on your weblog.
Is this a paid theme or did you modify it your self? Anyway keep up the excellent quality
writing, it is uncommon to peer a nice weblog like this one nowadays..