On Monday, me and my friend Rebecca (previous places sampled with the babe here) had a lunch-time catch-up over fish and chips at Kennedy’s of Goswell Road.

Rebecca and I both had a regular cod and chips, which at £6.50, offered a much more reasonable return for our money than the practically non-existent portions you get at United Chip, down the road.

In terms of quality of the lunch, with The Narrow being the finest fish and chips I’ve sampled in London and Quality Fish and Chips being the worst, I’m glad to report that Kennedy’s leans closer to the former than the latter. 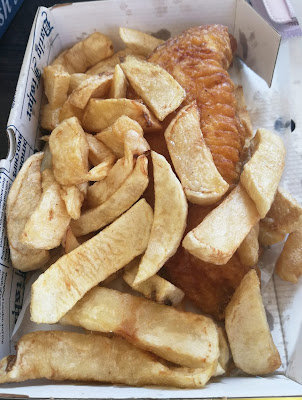 The chips looked hand-cut, and they were just the thickness I like them. They'd been fried in just the right amount of oil where they were scrumptious without feeling heart attack-inducing. The cod was delicious, with there being ample batter for me to savour (the batter is too yummy). Together, the two components fused together to make for a very fulfilling, tasty lunch.

Something that I didn’t love about Kennedy’s was that I had to pay 30p for tartare sauce. I wouldn’t have minded if the portion was decent, but it was a small, barely there sachet – think twice the size of those ketchup sachets you get for free in KFC.

Still, this was a takeaway and not a restaurant, so I don’t think I can grumble about this too much.  It is what it is. What I can grumble about, however, is how the woman serving us purposely tried to mislead me into buying lunch in the restaurant section, where I would have had to pay £7 , rather than £6.50.

Basically, Kennedy’s occupies two shops, side by side. The takeaway section occupies one of these stores, and the restaurant, another. The food is prepared the same way for both of these, although the prices are slightly higher in the restaurant – fair enough.

However, in the takeaway section, there are two high-top chairs and one table, and I asked the woman serving us that if we ate them there, whether we could still pay takeaway prices (as it was physically in the takeaway area and the table hadn't been cleaned, as you would expect in a restaurant). She pretended she didn’t hear me and said, ‘yes, you can sit next door’. Thankfully, Rebecca clarified for me that it was OK to sit in the takeaway section, for no extra charge.

I perceive this to be wilful ignorance from the woman, but I would be willing to give her the benefit of the doubt, if not for her awful attitude later.

Rebecca and I had ordered the same lunch. When it was ready, I ran to the counter to look at it (me likes my food). The woman asked me if I wanted salt and vinegar, both of which I responded yes to.

Rebecca had not yet replied when the woman casually poured liberal quantities of salt and vinegar on her fish and chips too. Rebecca then said, ‘oh, I don’t want salt’, and the woman rolled her eyes at her.

Given that the vendor was one who made the mistake – trying to save time so she added salt and vinegar to our food without receiving confirmation from Rebecca, she was definitely in no position to be rolling her eyes at us.

Graciously, the customer after us who had also ordered cod and chips was happy to have it with salt and vinegar on, so Rebecca had her’s. But if the customer hadn’t been willing, I dread to think what would have happened. The server made us feel like we were being such an imposition at that moment, when it was her own folly.

I was not impressed, and it put a bad taste in my mouth as I tucked into my lunch.

It’s a shame, because, fish and chips are one of my all-time favourite foods. And when I am in office, I’d love to treat myself to another lunch here as a reward for a morning’s hard work. But due to the surly woman serving us on Monday 6th August at lunchtime, I am afraid that is not going to happen.