The world can be a nasty place. 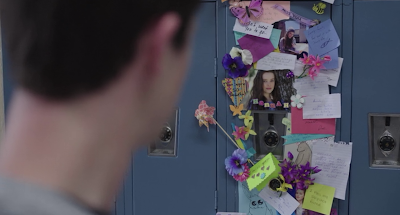 Whatever one's thoughts on the show and how dangerously close it sails to romanticising suicide, I have to admit that, drama-wise, it is certainly compelling to watch. Episode 9, 'Tape 5, side A' contained a rather unsavoury sexual assault of one of Hannah's friends, and was rated 18.

I e-mailed the BBFC querying why this episode was an 18, as, horrible as it was to watch, an episode of Orange is the New Black featured Pennsatucky getting raped not once but twice, by two different men, and was only a 15:

I am writing to ask about the depiction of rape in two Netflix shows, Orange is the New Black season 3 episode 10 (A Tittin' and a Hairin'), rated 15, and Thirteen Reasons Why season 1 episode 9 (Tape 5 Side A), rated 18.

Both these episodes contain rape scenes which are aversive and disturbing, as likely intended by the directors. The level of detail in both episodes are comparable.

Yet in the 15-rated OITNB episode, the same character gets raped by two different men in the same episode, whereas in the 18-rated Thirteen Reasons Why episode, the character is raped once (albeit with the scenes shown repeatedly).

I was wondering why this was, and if it perhaps due to the ages of the characters?

Because speaking as a viewer, I found the OITNB episode more distressing to watch, not least because in the second attack, the blank expression on the character's face suggested she was 'resigned' to being raped. Furthermore, the cumulative effect of watching the same character getting raped twice and its impact on her (already precarious) mental state was more distressing.

Thank you for taking the time to read my email and looking forward to your response.

This was their response: 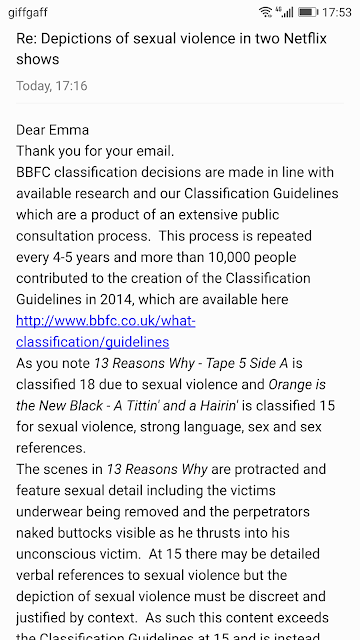 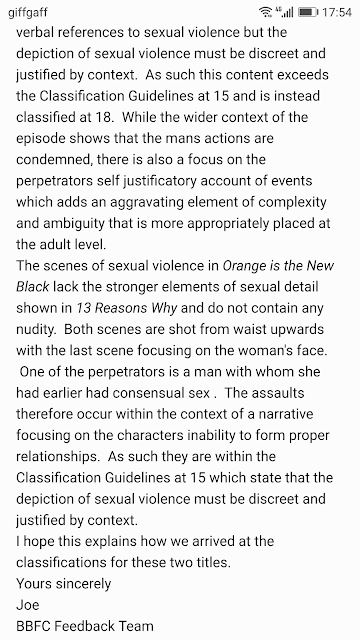 This is by far the most complete response they've given to me (for reference, see these two emails I sent them last year: un et deux).

I would just quibble with their saying depictions of rape at 15 'must be discreet', mind, because Wind River, a 15, showed the naked buttocks of the victim when she was being assaulted, which I would say was even worse than showing the attacker's bum. But I CBA to e-mail them; e-mailing back and forth about sexual violence is not my favourite thing to do with my spare time!

Remember how perturbed I was to see a full stop where there ought to have been a comma in Get Out's BBFC short insight? Well, checking the back of the DVD, I was happy to see they removed that error for DVD distribution: 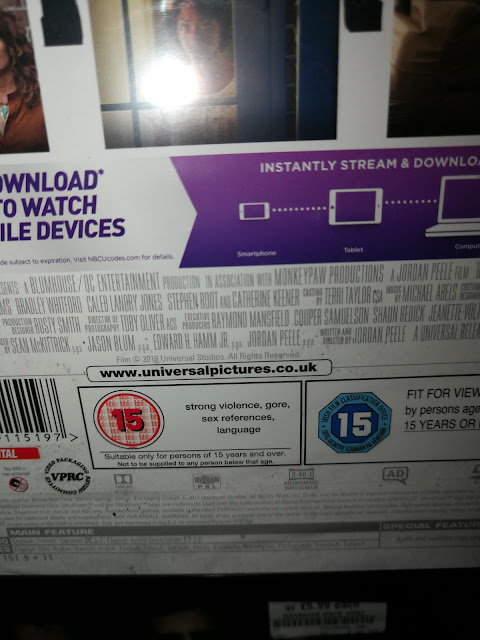 This series is a masterpiece