Bit of an oversight...

Dunkirk has released its third For Your Consideration advert, and, just like last time, I noticed an omission in who they were campaigning for. Except unlike in Harry Styles' case, this snub is for one of the best, if not the best element of the film, and thus, totally unacceptable: 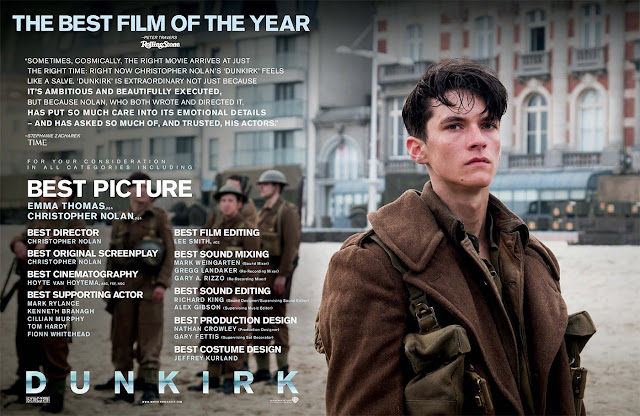 They've asked for consideration in all categories and outlined the ones that are most relevant to Dunkirk. Yet there's no mention of Hans Zimmer's incredible score!! Given that the music in the film was so tension-amplifying, that the BBFC even mentioned it in their extended information, that really is quite the oversight.

The only possible explanation is that Warner Brothers thought the score was so good, it didn't need highlighting; the quality spoke for itself. Which it does. After all, Zimmer's collaborations with two other single-word-titled Christopher Nolan movies, Inception and Interstellar, were both nominated in the Best Original Score category at the Oscars, and both those films had less Best Picture momentum than Dunkirk has.

But, still, it would have been nice to pinpoint it anyway, just to be on the safe side.

Being beady-eyed when it comes to nerdy film things, I also noticed that whoever made the ad has rejigged the order of two of the actors:

To jog your memory, this was the order of actors in the previous FYC:

The poster creator obviously didn't like this film that much, then!