This is my contribution to the Great Villains Blogathon hosted by Silver Screenings, shadowsandsatin and Speakeasy. I have decided to cover Richard Attenborough as Pinkie Brown in John Boulting’s atmospheric Brighton Rock (1947). 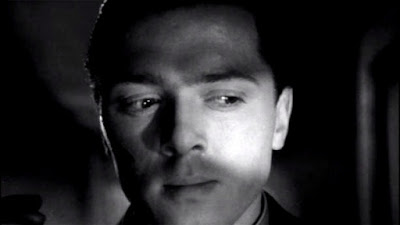 John Boulting’s adaptation of Graham Greene’s seminal crime novel surrounds itself with gangsters in the eponymous seaside town. Pinkie Brown is a local mob moss with a cold, clinical demeanour and no sign of a conscious. He’s an interesting villain precisely because his motives (money and power) are utterly singular.

The majority of baddies in film are presented with some kind of tragic backstory or justification for what turned them sour, such that it creates a strand of pathos for the bad guy. With Pinkie, he is just and out-and-out criminal, so it says a lot for Attenborough’s charisma that you’re mesmerised by him, rather than turned off by his one-dimensional character (as is the case with say, Jlaw in American Hustle).

Although some of the film’s power has been eroded over time, I enjoy watching modern films though the prism of Brighton Rock, purely to ponder over which performances have been influenced by Attenborough’s icy turn, directly or indirectly.

For example, what really struck me about Pinkie was his big, almost bug-like eyes and how little he blinks throughout the film. Such a quality is common in modern day films if an actor wants to give an otherworldly, unsettling performance, such as Alicia Vikander as the calculating robot Ava in Ex Machina.

Furthermore, Pinkie's terrifying changes of moods and behaviour (smiling warmly with an associate one second, condemning said associate to death the next) recalls Joe Pesci's mercurial character in Goodfellas. Pinkie's acts of violence, when they come, are quite tame by standards of violence in 2017 cinema, but for 70 years ago, the acts are really quite impactful. (Let's just say I side with the Irish 12 certificate rather than the BBFC's PG...)

The fact that Pinkie has the undeserved love of a good woman renders his villainous deeds more nefarious, because they’re not being carried out through a vacuum, but with a callous disregard for someone who misguidedly believes that he’s redeemable.

Of course, women falling for bad boys is a tale as old as time, and in Pinkie’s case, it helps that he’s quite handsome. Carol Marsh, selected for the part of Rose when thousands auditioned for the 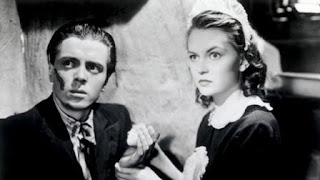 part, is the perfect foil for Pinkie, her naive, unconditional love the more tragic contrasted against his unfeeling decision to marry her purely because wives cannot testify against their husbands.

That Richard Attenborough would grow up to be that cuddly figure in Miracle on 34th Street, amongst other titles, only goes to illustrate how talented actors can transform themselves when on screen. In Attenborough’s capable hands, Pinkie is not just a movie villain, but a prototype of a baddie of so many levels of dark, future actors can only wish to emulate him.
Posted by Emma at 4/28/2017 07:31:00 pm

I've only ever seen Richard Attenborough in "nice" roles, such as Miracle on 34th Street, Jurassic Park or The Great Escape. But I think that would make him über sinister in this kind of role.

Your review of this film, and Attenborough in particular, is fascinating. I can't believe I've never seen this one! I know I'll like it.

Thank you for joining the blogathon and for bringing this remarkable villain with you. :)

I also have only seen Attenborough in sympathetic roles. But a chance to see him play against type is enticing. Good review.